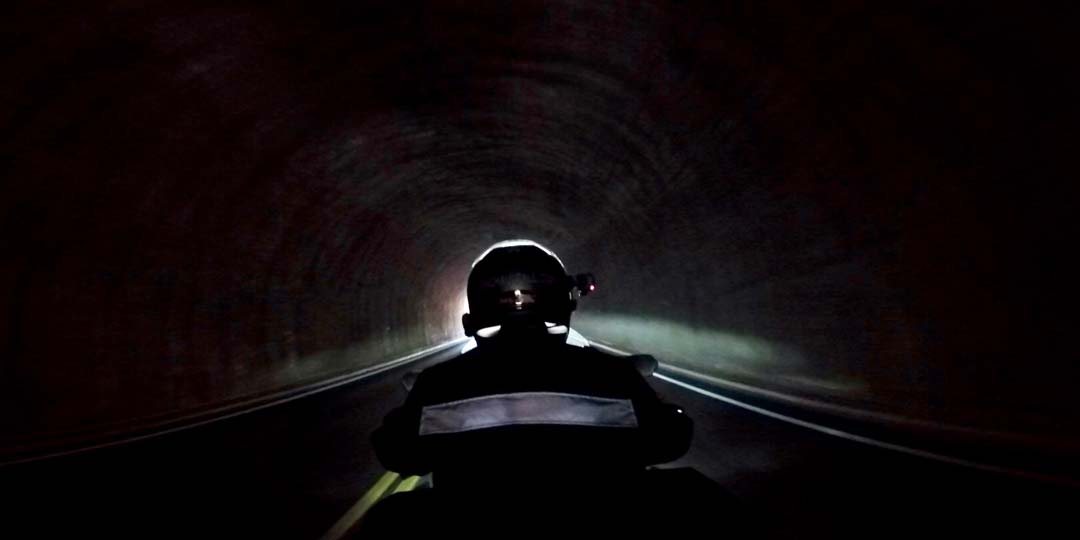 Drizzly, cold and dark was never my favorite way to embark on a thousand mile day on the bike, even when I was riding to an event I had been looking forward to. I was heading to Newnan, Georgia to share my Ural in the Iron Butt Rally story to a large group of Harley Davidson riders. It was November. We had just changed the clocks to steal away another hour of precious daylight. And although I was heading south, I was headed for an even colder morning. About 200 miles into my ride with my heated gear working to fool my core by keeping the chills away, I was making good time. I wondered where I stood in my million mile quest for Multiple Sclerosis and I knew I was getting very close to the big 400,000 milestone. I poked at my cellphone with my stylus which failed to wake it’s brain. I then activated the voice command to open my bike maintenance app. The mileage page opened up reminding me I was 6,000 miles overdue for an oil change, and then it scrolled to the records page. A quick mathematical calculation made me realize I would reach a major milestone in the next four or five hours.

300 miles never took so long to rack up.

The sun was up—and the temperature stopped dropping— and ever so slowly started to rise. Soon it would climb above freezing, and maybe in a few hours, I could even lift my helmet visor briefly to take a sip of water off my Camelback. Winter weather was here, although the calendar disagreed. I watched the bike’s odometer click up to 79,900 and without any fireworks or party horns to celebrate, I settled for a simple smile that creased my cheeks against the thick padding of the helmet. I had documented 400,000 miles Chasing the Cure.

After seven years traveling the country as a patient advocate for Multiple Sclerosis, I know my adventure is really going somewhere. This particular trip started in Atlanta where the Harley riders welcomed me with open arms, trading a plate at their annual Thanksgiving luncheon for my inspiring presentation. Although I wasn’t paid to be a speaker, they passed the hat and raised $1200 for the MS charity I work with. I then rode across the United States to do a second presentation in Costa Mesa, California. This event, held in a high school auditorium, was organized by a fellow long distance rider who invited family and friends to hear me speak. Again, donations were collected and approximately another $1000 was raised for the charity.

From Costa Mesa ,I made my way the short distance to Long Beach, CA where I would spend about 30 hours working at the International Motorcycle Show. My bike and I were on display for the tens of thousands of attendees. At their press conference, Yamaha announced a brand new smaller adventure bike called the 700 Tenere. They also introduced me and renewed their continued support of me and my journey. They ended by telling the motorcycle world that they were going to give me one of the new bikes!

I can’t wait as the new bike is similar to my old Tenere, but smaller and really capable off road. It will be quite a change from what I am riding now, but will allow me to explore even more of the back roads and rural parts of this country. I am also very excited that Yamaha is stepping up and continuing to support me in my journey Chasing the Cure!

As ridiculous as it may sound, getting diagnosed with MS has created so many opportunities and opened so many doors for me. Although my disease has been stable and manageable, I also know others who are not responding to treatment and who’s disease continues to progress. Dedicating the next 600,000 miles to them, I will not slow down, and I will not stop until we have a cure.