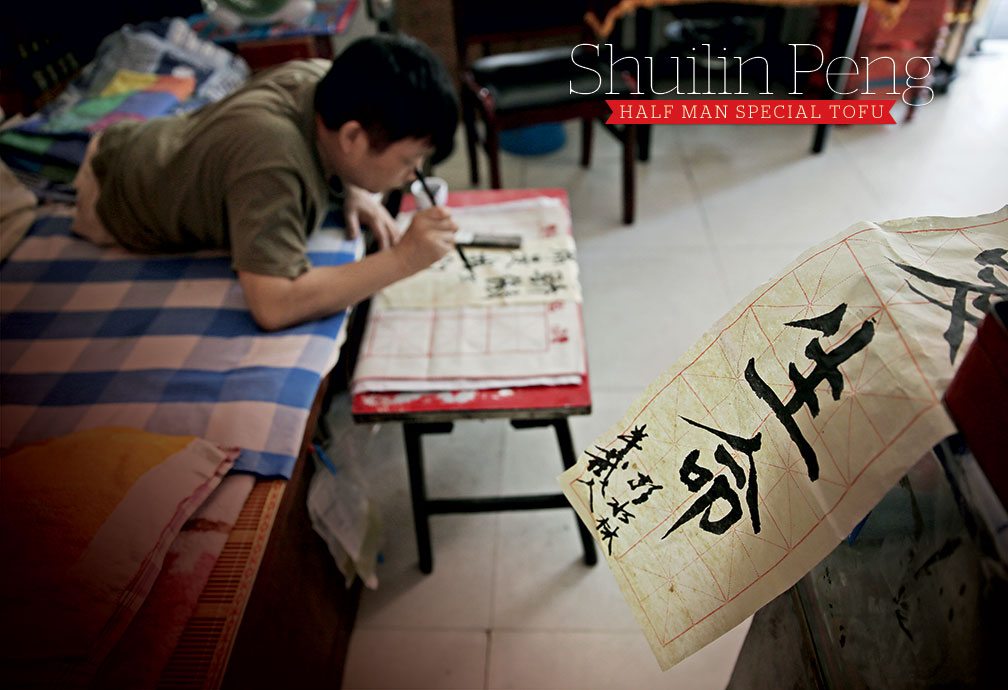 Born in 1958 in Hunan Province, Shuilin Peng suffered severe injuries in a road accident in 2004 in Buji, Shenzhen. His body was amputated in half, and today he is China’s rarest truncation survivor.

Shuilin Peng is less than three feet tall and walks on his two arms. He lost his lower body when a freight truck struck him on a road and left his torso sliced in half. Since his lower torso and legs were beyond repair, doctors sewed him up. At the time of the accident, a television reporter caught the tragedy on tape, and Shuilin Peng’s story was beamed all over China, as were his many subsequent operations. He is considered nothing short of a medical miracle.

Shuilin Peng hopes his story is an inspiration to people with disabilities. Although many feel sorry for him, his son admires his father: “One person who is disabled became famous for climbing Tai Mountain. My daddy can climb the tallest building in Changsha city!” And to do so Shuilin Peng holds his upper body very straight while using two wooden blocks to move around. Each step makes a big sound.

But his health remains unstable. “No one knows how long my daddy will live since his medical situation is a rare case,” explains his son. “There is no precedent in the medical field for his condition.”

To maintain his bodily functions, he has an artificial urinary tract and anus. His monthly medical bills — about $333 — include the frequent replacement of catheters and urine and drainage bags. To reduce medical costs and avoid long lines at the hospital, his wife learned to change his catheters and drainage bags at home.

Gratitude for a Full Life

On the day of our interview, I walked with Shuilin Peng the fifteen minutes to his home. He started to take off his body case as perspiration had soaked his shirt. His wife brought him a bucket of water to clean himself and explained, “We can help him around the house, but we like to let him do things for himself. He feels good when he can do work around the house.”

Although Shuilin Peng sometimes uses a wheelchair, he is active. His son told us his father learned to do tricks with his wheelchair in only three months. “I admire him! He has fun with that wheelchair.” In Shuilin Peng’s spare time, he plays card games with neighbors, lifts weights, practices calligraphy and plays music on his Hulusi, a Chinese folk instrument.

His son says his father doesn’t shy away from speaking to people, especially the homeless, whom he often tells, “You’re able persons! You should not beg. Even I can get work as a disabled person.” These moments make his son feel proud. 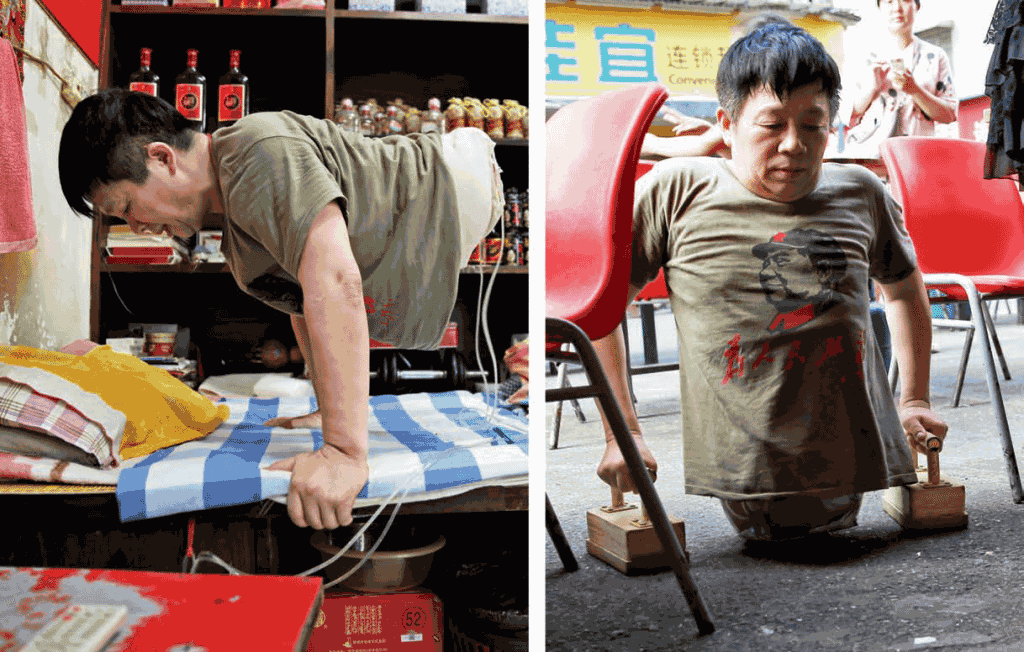 On the day of our interview, it was Shuilin Peng’s 57th birthday. In his honor, a local chairman from the Hunan Xiangxiang’s Disabled Association came to his home, where a birthday celebration was underway. While everyone chatted, his wife gave a toast, saying cheerfully, “Lao Peng, congratulations to your 11-year-old reborn self!” I couldn’t help but stare at this elderly married couple that seemed to defy the odds. Shuilin Peng smiled at his wife and drank some water. She cut the birthday cake and served the first bite to her husband. He blushed when he realized all the guests were watching him.

Without question, Shuilin Peng has lived a challenging life since the accident. Although a decade has passed, he has yet to receive any compensation from the local courts. “I have to live no matter what,” he says. “When I am strong enough, I will fight in court for other people who are disabled.”

What sustains this Chinese man is his deep love of family. Despite the loss of his lower body, Shuilin Peng knows he hasn’t lost everything. “I still have my upper body and the rest of my life to live. I still have my wife and my son.” He loves practicing calligraphy and playing the Hulusi, a Chinese folk instrument. Shuilin Peng uses two customized wooden blocks to walk around. He is able to stand with the help of a customized egg-shaped case created by the China’s Rehabilitation Research Center. His wife has become a “home nurse,” which she’s done for 11 years.

In 2008, with the help of a certificate from the Human Disabled Person’s Federation, Shuilin Peng’s dream of opening his own convenience store was realized. But with 38 convenience stores in the area, competition is stiff. His monthly net income of $333 is just enough to cover medical expenses. Although he opened a second store in Changsha last year, it is currently closed for remodeling. He pays rent and salary for one employee, but his net income barely covers all of his expenses. 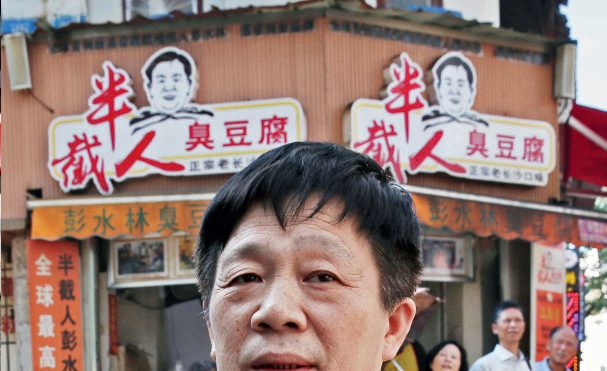 To help make ends meet, he decided to sell his homemade tofu snack, called Stinky Tofu in China, in front of his convenience store. He branded his special recipe the “Half Man Special Tofu.” The name recognition, says his son, has a competitive advantage. “My father is indeed a half man. Other people can’t copy him. Our family has a special recipe and people love to eat it for a snack.”

Although his special fermented tofu snack is tasty, few customers have sat and sampled his product thus far, which worries the grocer, who paid $1500 to establish the snack stand. His son, however, offers reassurance, suggesting his father be patient. The tofu, he says, is delicious, and customers will come someday. But Shuilin Peng knows what he must do: “I need to keep busy every day. I don’t want to sit all the time. I have lost my lower body, but I can’t waste my upper body.