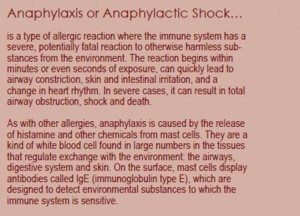 is a type of allergic reaction where the immune system has a severe, potentially fatal reaction to otherwise harmless substances from the environment. The reaction begins within minutes or even seconds of exposure, can quickly lead to airway constriction, skin and intestinal irritation, and a change in heart rhythm. In severe cases, it can result in total airway obstruction, shock and death.

As with other allergies, anaphylaxis is caused by the release of histamine and other chemicals from mast cells. They are a kind of white blood cell found in large numbers in the tissues that regulate exchange with the environment: the airways, digestive system and skin. On the surface, mast cells display antibodies called IgE (immunoglobulin type E), which are designed to detect environmental substances to which the immune system is sensitive.

A substance from a known threatening source, such as bacteria or a virus, is called an antigen. A substance that most people tolerate well, but to which others have an allergic response, is called an allergen. When IgE antibodies bind with allergens, they cause the mast cell to release histamine and other chemicals, which spill out onto other nearby cells.

When these chemicals interact with receptors on the surface of blood vessels, it causes them to leak fluid into surrounding tissues, where fluid accumulates, and the area becomes red and swells. The smooth muscle cells of the airways and digestive system constrict, while nerve endings cause itching.

In anaphylaxis, the response is due both to hypersensitivity to the allergen and the fact that it gets distributed through one’s system. Exposure by ingestion, inhalation, or skin contact can cause anaphylaxis. In some cases, it may develop from less severe allergies.

Anaphylaxis is most often caused by allergies to foods, drugs and insect venom. Specific causes include:

Exposure to cold or exercise can trigger anaphylaxis in some individuals. Symptoms may include: