This really is a small world after all. When my dad was a teenager playing soccer, he could not have predicted that he would have a daughter interviewing his good friend and teammate Andy Madadian. Today he is best know as Andy, is now an international pop star who has created a fusion of sound that combines traditional Middle Eastern instruments with the Western world’s drum and bass, guitar and modern technology. From his early childhood in Teheran, Iran, he went on to live in Europe and then the US, where he started a cover band that played pop music. Today his albums have sold in the millions and he’s played the world’s most prestigious venues.

A humanitarian, Andy lends his support to a range of charitable causes and recorded “Stand by Me” with Jon Bon Jovi to show solidarity for the people of Iran. The musician’s appearances in feature films and TV include House of Sand and Fog with Sir Ben Kingsley and Jennifer Connelly and The Shahs of Sunset. Andy is married to singer /songwriter Shani Rigsbee with whom he frequently tours. Recently ABILITY’s Chet Cooper and Lia Limón Martirosyan caught up with Andy. 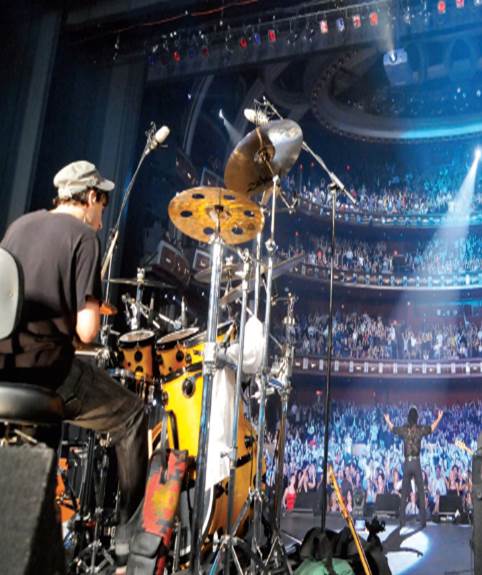 Andy Madadian: It’s been a busy year. The season started in late March with the Persian New Year. We went to Tajikistan, which is between China and Afghanistan. We also went to Uzbekistan and, of course, we go to Armenia every year. Now we’re performing in the US and we’ll soon be going over to Dubai.

Martirosyan: Your music has a lot of different flavors, from Armenian and Iranian to Arabic and African.

Andy: I’m an Armenian born in Iran, so those flavors are in my blood. But unlike the average Iranian Armenian, I grew up with a love of American music, British music, Rod Stewart, Chicago, Ray Charles, Deep Purple.When I came to the US, I went to college for nearly three years and then went on tour with an American band, singing cover tunes.

When the Iranian revolution started in 1979, I came back to my musical roots; the magic of my sound comes from fusing all these different worlds: Western; rebellious pop music with lots of drums and bass; Middle Eastern harmonics; and sweet melodies. Out of that, I forged my own style and thank God people respond to it.

Cooper: How did your collaboration with Jon Bon Jovi on “Stand By Me” come about?

Andy: For many years I’ve been in touch with Don Was, who is one of the best producers in the world. We have mutual respect for each other’s work and we’ve been talking about collaborating for a long time. When the Iranian election happened four years ago and people weren’t happy with the results, there were riots in the streets and Don called me and said, “Why don’t we do a song with you and an American artist to show solidarity with the people of Iran?” I jumped at the idea. Don brought in Jon, which was such a beautiful treat. I’m a big fan of his.

It was a magical day because not only was he there, Richie Sambora was, too and we went into John Shanks’s studio. Within a few hours we’d recorded the track. Everybody passing by said, “Hey, I want to play an instrument.” Everyone wanted to do something for the people of Iran. Musicians came in; Don played bass and the next day the video was edited and released. 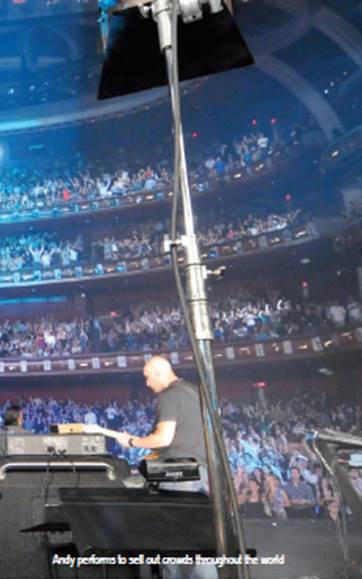 Andy: And we never promoted the song; we never made any money off of it because our intention was not commerce. The first day we thought: This is going to be a show of support for the people of Iran—outside of politics and all that. The song and video found a life of their own. Jon and Richie were extremely nice and professional.

Cooper: His pronunciation of the words was impressive; you’re saying he learned and recorded it in just one session?

Andy: On the spot.

Andy: We didn’t preplan it. I called my lyricist, Paksima Zakipour and she wrote the lyrics and phoned them in. Jon learned to sing in Farsi. He did such a great job. Iranians really love his Farsi accent.

Cooper: So there’s an accent? I guess it’s like Americans listening to someone with a British accent?

Andy: My wife, Shani, is American and she speaks Farsi; the American Farsi accent is very sweet.

Cooper: Tell us about Shani and your experience with cancer.

Andy: She’s an extremely talented singer, songwriter and actress—well trained in all three. She’s been in the music business all of her life and she’s had hits in both English and Farsi. Around 1992, we started working together, began touring everywhere in the world and then, suddenly, she was sick. We found out that she had ovarian cancer; she had a hysterectomy at Cedars-Sinai Medical Center and since then she’s been doing unbelievably great. We expect that to continue for another hundred years.

Martirosyan: You caught the cancer early?

Andy: Yes. Although for a while, she was diagnosed by different people as having different things. Eventually, the doctors at Cedars-Sinai said it was cancer and that she had to have immediate surgery. We were lucky because it had not spread to other organs.

Martirosyan: What kind of symptoms did Shani have?

Andy: Mostly pain in the abdomen.

Cooper: Did she have to undergo radiation or chemotherapy?

Andy: No. We had a great doctor and afterwards she was as healthy as can be. This is why I look at the glass as being half full, because it could have been worse.

Martirosyan: Is that why you’re associated with some of the charities you work with today?

Andy: Even before Shani’s cancer we were involved with charities, I come from a poor family and understand what it is to be poor, so all the support we’ve been given, we’ve turned around and given it back to the community. It doesn’t matter if it’s a Jewish fundraiser, if it’s a Democratic or Republican fundraiser, if it’s for children. As long as it’s helping somebody, we do it.

Martirosyan: Tell us about meeting the Dalai Lama during the “One World” concert? 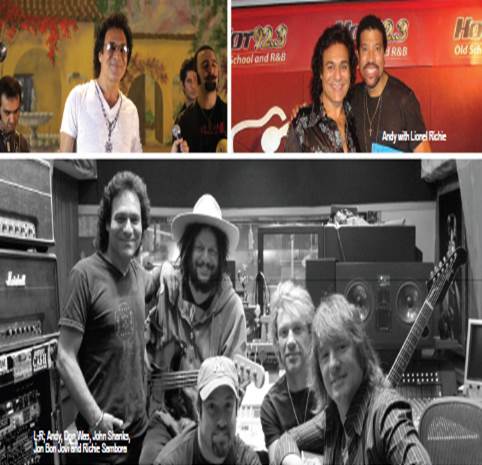 Andy: That took place at Syracuse University last year and it went really well. It was a treat meeting His Holiness up close and listening to him. He took all the artists backstage for an hour and chatted. He’s very funny, very positive. It was a great concert and experience. We were amazed because we’ve always been fans of his. Followed his career as much as we can and appreciate people like him who affirm peace and love.

Cooper: I noticed that you both performed for the American Cancer Society’s Relay for Life. Do you and your wife work together often, or do you mostly perform separately?

Andy: We do have totally different careers and, of course, Shani’s in the movie business as well as an actress and producer. But we like to do things together as much as we can, like charity events, because we believe in the same causes. We’ll be doing an event in Monte Carlo.

Martirosyan: So how do we get a seat on that plane to Monte Carlo?

Andy: (laughs) You just tell me you want to go and I’ll create it for you.

Andy: Yes, there you go!

Cooper: You also did a collaboration where you sang in both Farsi and Arabic?

Andy: Yes, that was also a historical moment. I did a song with a Raghed Alama who is probably one of the top three artists in the Arab world. We wrote and recorded it together; it was a number one hit there. A Persian and an Arab artist had not sung together that I know of, so that was interesting.

Coming from a soccer player’s background, I like teamwork. I’ve done a lot of duets with Armenian artists—people who were my idols growing up. I did a duet with Algerian and Egyptian musicians. I have many, many Armenian collaborations and many, many Persian collaborations and of course the song I did with Bon Jovi. I have an offer from Lionel Richie and I can’t wait for that to happen. I think the fusion of my music with American music is beautiful.

Cooper: I think what you’re missing at this point is a collaboration with Lia. When she came up with the idea of talking to you, I thought: “Why aren’t you two working together?”

Andy: My brother likes Lia’s voice a lot. Let’s find the right song and record something. I’m sure the Armenians are going to go crazy for it. 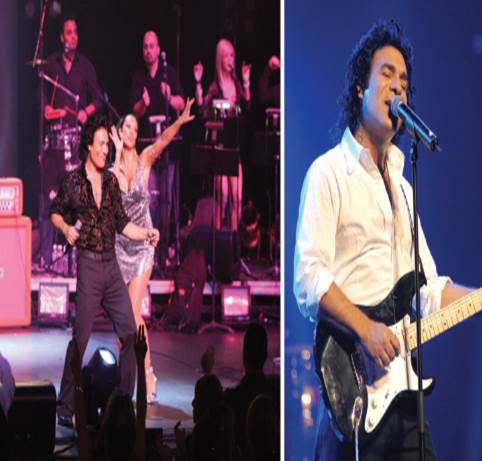 Cooper: We had this incredible interview with a young man name Derek Paravacini and his music professor, Adam Ockelford, visiting from London (see page 18). Derek happens to be blind and have autism. The two of them came to the States for a couple of days and performed at the University of Irvine. We went to LA to meet with them at Carmen’s studio he was in the band Tower of Power. Derek accompanied Lia on the piano; they performed “The Marriage of Figaro,” and it was really great.

Andy: Can I hear that?

Martirosyan: We’re producing a video of it.

Andy: I’m anxious to hear it.

Cooper: I’m going to Dubai in preparation for an international conference called ABILITIESme on disabilities later this year in Abu Dhabi. They’re looking for entertainment that’s a mix of Arabic and English. You’ve already produced music in this area, so maybe we can get you invited.

Andy: We’ve been performing in Dubai for years and 99 percent of our audience is made up of Iranians because my music is banned in Iran. That doesn’t mean people don’t have it, everybody has it, it’s just not legal to sell it because my music is sexy, Americanized music and they have a religious government. So if people inside Iran