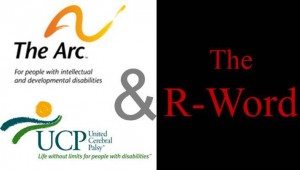 The Arc and United Cerebral Palsy released the following statement in response to the use of the r-word and the offensive depiction of cerebral palsy in the new film The Wolf of Wall Street.

“The Wolf of Wall Street is getting a lot of attention for how it offends audiences on many levels, but one aspect that hasn’t been discussed is its use of the r-word and its unacceptable mockery of people with cerebral palsy. Hollywood just doesn’t seem to get it. More than five years after people with disabilities protested at theaters across the country against Tropic Thunder, a film which included a highly offensive portrayal of people with intellectual disabilities, the industry is still using language and jokes that hurt audience members and don’t add any value to the artistic intent or point the film is trying to make,” said Peter Berns, CEO of The Arc. “Among moviegoers who have paid to see The Wolf of Wall Street in recent weeks are people with disabilities, their parents, siblings, and friends. It’s time for Hollywood to wake up and see that their customers deserve better.”

“The Wolf of Wall Street’s gratuitous use of an offensive term for people with disabilities, as well as its depiction of cerebral palsy, is outrageous. For more than 60 years, UCP has been working to ensure that people with cerebral palsy and other disabilities can live their lives without limits—including equality, inclusion and respect in our society—but it is very clear that our fight is far from over,” said Stephen Bennett, President and CEO of UCP. “While we understand that the film’s content is deliberately distasteful and excessive, it does not excuse it. It is astonishing that the film’s producers, director and actors deemed this kind of language and portrayal to be acceptable—they can do better, and we urge them to.”