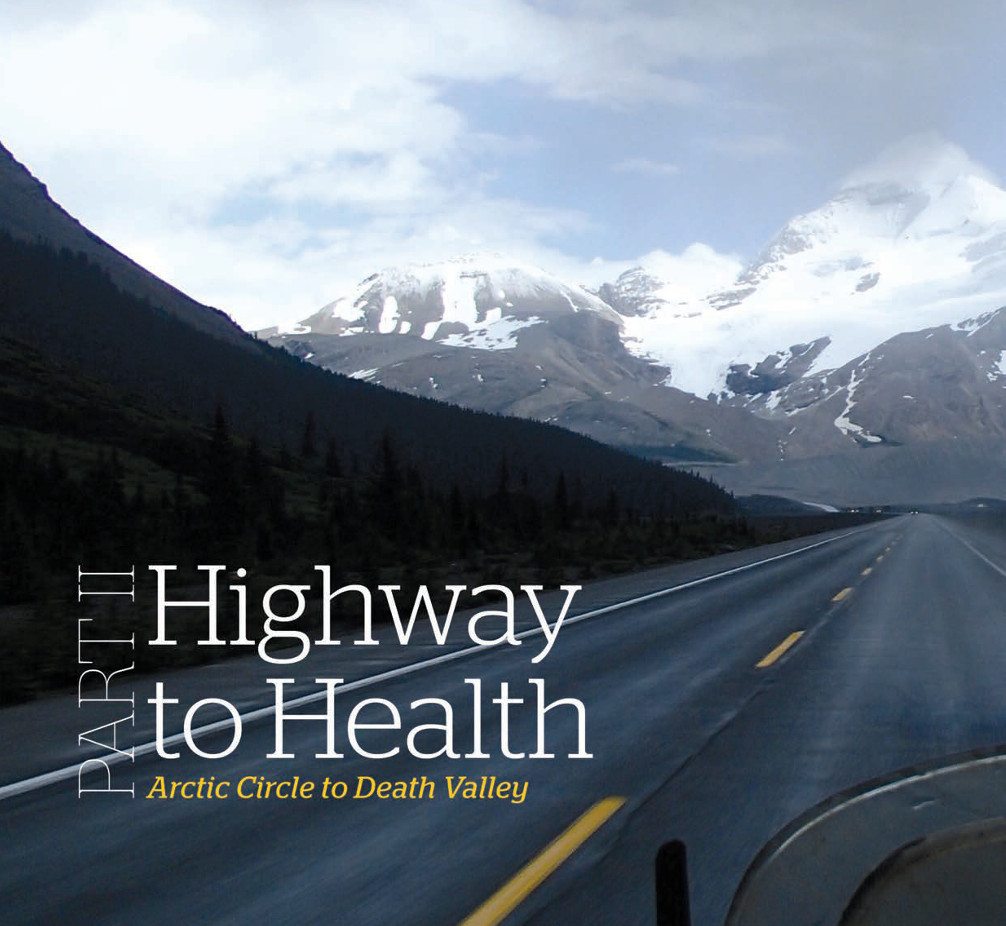 Continued from No Matter What Part 1

With approval from the cafeteria worker who had wheeled my low-fat lunch into my hospital suite, I left New Hampshire for Alaska one day after being discharged and just three days after having a couple of stents inserted into my heart. Have I told you that I’m on a mission to ride a million miles, and I just don’t have any time to waste?

I rode to Lake George, New York, where I presented two seminars at the Americade motorcycle rally. I left New York for a five-day ride to Anchorage and the start of my three-week speaking tour out west, sharing my story with others who live with multiple sclerosis (MS).

The first two days of the trip were fairly boring until I reached British Columbia and the Yukon. The towns began to shrink in size and became few and far between, but the wildlife got bigger and more numerous. Deer, bison, moose, bears and coyotes were everywhere!

Accommodations became more interesting the farther north I traveled. In British Columbia, I spent a night at the so-called “famous” Fort Nelson Hotel where I was the only guest, and another at a place in the Yukon called Beaver Creek RV Park & Motel. I was a welcomed stranger to the locals, a lone explorer from a distant land. Daylight was extending each day by a few hours, and by my fifth day on the road, the 20 hours of light made it easy to keep riding. The roads, however, were rough and brutal on the bike’s tires and suspension, but I just kept pounding down the hours and miles. It was a great example of the therapeutic use of riding, for all my issues and problems quickly faded behind me. I was certainly getting a good dose of MotoMedicine on this trip. 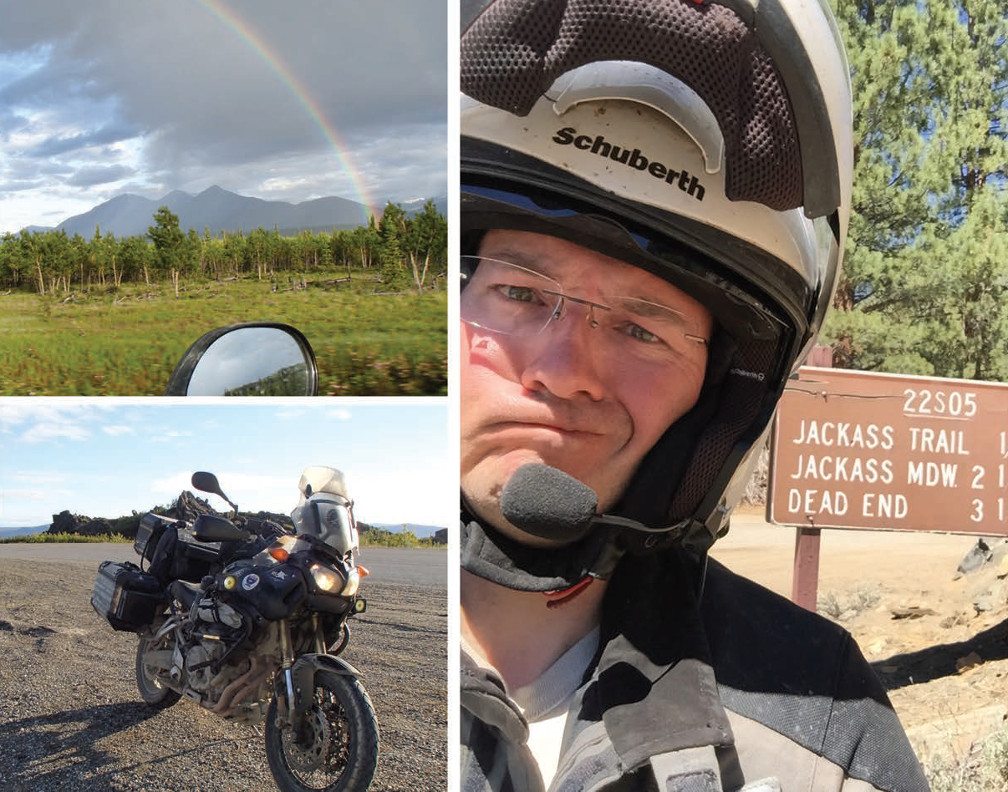 I found it a bit weird having to present my passport to visit the 49th state, Alaska. I made great time to Anchorage despite the frequent road construction delays. “We have two seasons here, winter and construction,” informed the chatty flagger as I waited 30 minutes for the lead truck to return and guide me and the twenty vehicles behind me over a 10-mile stretch of loose gravel and sand. This scene would repeat itself a dozen times before reaching Anchorage.

I arrived on time for a morning appointment I had at Anchorage Yamaha to have a set of Bridgestone tires installed and an oil change. At 83,000 miles, this was the very first time my YAMAHA had been to any dealer for ANYTHING!

My smart phone’s camera had stopped working again, but thankfully Anchorage had an Apple store downtown that was able to swap me out a whole new phone. My phone pictures had been all selfies since Fort Nelson. I always carry a point and shoot camera, so most of the trip was shot with my waterproof, shockproof and bulletproof Olympus Tough camera.

I spoke to an enthusiastic group of people with MS and their families, had a decent meal and contemplated my next move. I had fresh tires and oil, and six days before I was due to speak in Las Vegas. I knew I had about 24 hours of extra time to play with before heading south, so I decided to push north, ride by Denali National Park up to Fairbanks. If time allowed, I would then attempt to ride part of the famous Dalton Highway. I knew at mile marker 175 there was a trucker camp at Coldfoot, and if I could make it there by evening, I would have passed over the Arctic Circle by 60 miles or so. More importantly, I knew it was the last chance to get gas, food, a hot shower and a bed.

I made it to the famous Slate Creek Inn and apparently got the bridal suite. My room was in a trailer,

had plywood walls and a camper-sized shower. No HBO, turn down service or mini bar, but the room was clean. Believe it or not, I would have paid twice the $229 rate for a bed; after all, I had just about ridden to the end of the earth!

The Dalton Highway, or Haul Road as it is known, runs along the Alaskan Pipeline and eventually ends in Prudhoe Bay, but my northern most point on this trip would end at Coldfoot. I had ridden 5500 miles in less than a week from New Hampshire to Anchorage, and the Arctic Circle was a bonus I had not expected. I now had just five days to ride 4000 miles to Las Vegas. The additional 500 miles of gravel to Prudhoe Bay and back would have gobbled up another 15 hours at best—a risk even a Vegas veteran would walk away from. I had a story to tell and folks were counting on me to share it in Vegas. 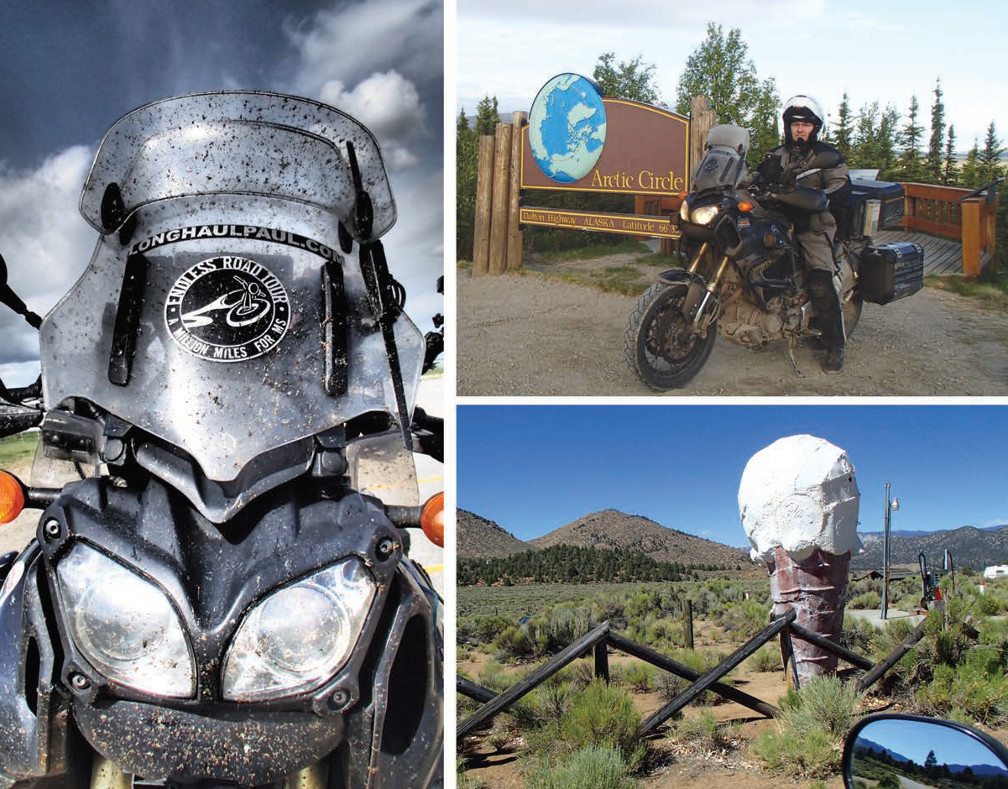 Riding two days later by accident through Jasper National Park in Alberta, Canada, was probably the biggest jackpot of my entire trip. I was merely following the GPS prompts for the quickest route back to the States, and WOW! Mountains with snow, glaciers, and wildlife—it was truly breathtaking. I stopped and took quite a few photos. My only regret was the same as it always was: that Elin, my wife, was not with me. And, as always, I jotted down the location and promised myself I must return to this very spot with her.

The temperature in Canada and Alaska was mostly in the 40’s and 50’s, but as I returned to the lower 48, it began to rise. I made my way to Vegas, and rode through 117-degree heat. It was so hot I could not keep my hands on the bike’s handgrips, even with gloves on!

My personal cooling system, the CTC-100, had been strapped to the side of the bike for the entire ride so far, waiting for the call to duty. When I turned it on for the first time, it yelled and screamed to a stop. Nearly 8000 miles of dirt, mud, gravel and bugs had packed themselves into the unit and jammed the cooling fan. It broke. I was left with trying to cool myself down the old-fashioned way, switching my dash temperature gauge from Fahrenheit to Celsius, so 100 degrees became 38. My brain didn’t fall for the trick this time; it was just too damn hot.

After my talk in Vegas, I was really looking forward to visiting one of the famous casinos, but between the heat and fatigue, I never made the quarter mile walk from my hotel to the strip. My body gave up, MS struck hard and rendered me powerless. I was sad and felt defeated for the first time since leaving New Hampshire. I had managed to ride a motorcycle across the country and to the edge of the continent, but at that moment, my body was utterly useless. I did not have the ability to make it down the street. MS, like many other illnesses, can rob people of enjoying even the simple things in life. Depression is very common in people with chronic illnesses, and I can certainly understand why.

I am, however, one of the lucky ones. These feelings that often overwhelm people do not stay with me long.

Retreating back to my room, I cranked the A/C as cold as it would blow, stripped naked and swallowed every loving spoonful of an overpriced tub of Ben and Jerry’s Karamel Sutra that I had charged to my room. Vegas plan ‘B’ was screw MS and heart disease; and I got to gamble after all; I had the drapes wide open. What happens in Vegas, stays in Vegas, right?

I left at 4 am when it had cooled down to 86 degrees. I followed a route that bypassed Death Valley by riding through the canyons to Los Angeles. My safety relied on my ability to stay hydrated and cool as much as possible. I packed ice into the pockets of my Aerostich riding suit, drank like a fish, and found interesting signs along the way to keep myself amused, like the giant ice cream cone in the middle of the desert and multiple icy road signs. 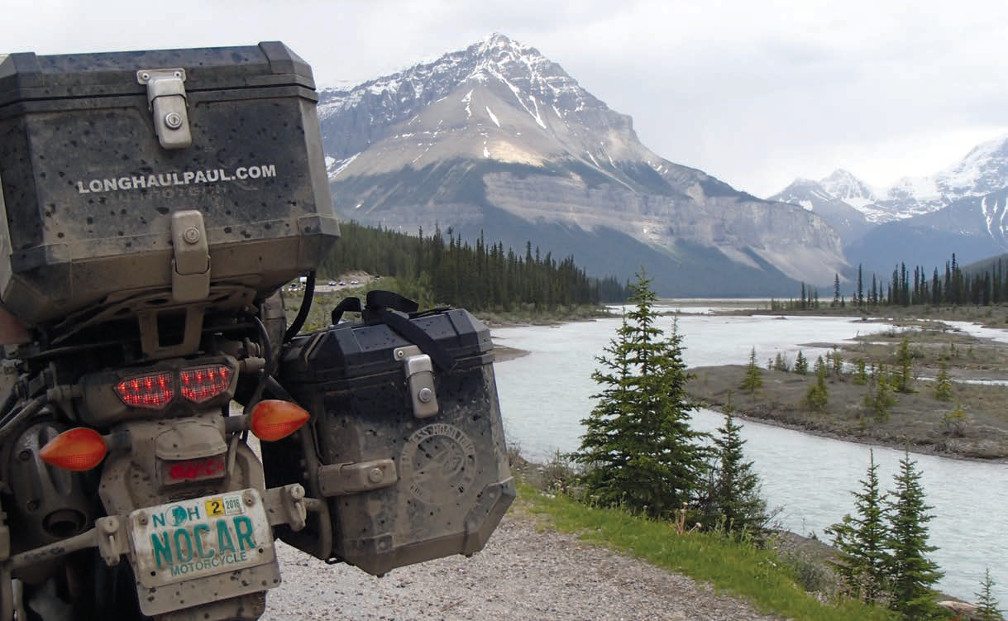 The cool distractions worked for most of the morning, but by the time I reached Beverly Hills, I was smack dab in the middle of another heat-induced pseudo MS attack: leg weakness, mild confusion, fatigue and an inability to speak clearly. I could not understand where the valet wanted me to park my bike, even though the garage was just around the back of the building. He repeated it four times, but I just nodded, unpacked my bags, check in, and went to my room. I didn’t think they would tow my bike, and frankly by this point, I didn’t care if I ever saw it again.

I lay down for 20 minutes, took a cold shower and regained most of my heat-induced deficits before returning to the front of the hotel an hour later. I explained about MS and that I was not trying to be rude earlier, I just could not move my bike another foot because of the heat. By now, my encrusted bike had become a Hollywood celebrity, drawing a small crowd of hotel staff, guests and live bugs feasting on the dead ones. A couple wanted to take their picture with me, people took my brochures and were amazed to hear that I had travelled to the Arctic Circle and Alaska just a few days earlier.

It was a humbling moment of realization for me, as well. Despite being challenged by having a progressive disease that can strike at any given moment, I had indeed just accomplished something absolutely amazing. For the first time since leaving home, it also occurred to me that it was because of my MS that I was experiencing the trip of a lifetime.

That’s a level of cool that will never be affected by temperature.

Next issue, Wheels out West Part III Coast to Coast and a Chat with Chet Cooper.