From Pigging Out to Nutrition Classes

Right now, not much racing is happening, so I’ve been doing different things to keep myself busy. Over Easter, my family wanted to see me, so they bought me a plane ticket to come home to Florida for a few days. 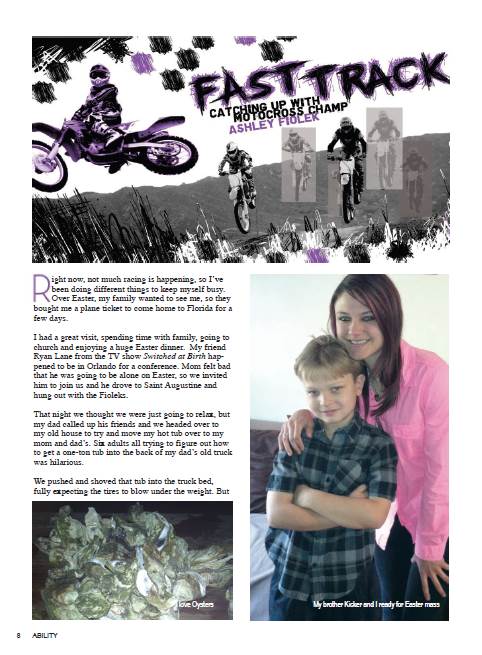 I had a great visit, spending time with family, going to church and enjoying a huge Easter dinner. My friend Ryan Lane from the TV show Switched at Birth happened to be in Orlando for a conference. Mom felt bad that he was going to be alone on Easter, so we invited him to join us and he drove to Saint Augustine and hung out with the Fioleks.

That night we thought we were just going to relax, but my dad called up his friends and we headed over to my old house to try and move my hot tub over to my mom and dad’s. Six adults all trying to figure out how to get a one-ton tub into the back of my dad’s old truck was hilarious.

We pushed and shoved that tub into the truck bed, fully expecting the tires to blow under the weight. But we lucked out and they held up. It was way sketchy but Kevin, my dad’s friend, sat in back with the tub trying to keep it secure so it didn’t fly out, although I’m not sure what he was going to do if the thing broke loose.

We drove it back to my mom and dad’s house and everyone we saw along the way laughed at our caper. So much for a restful Easter. But dinner was delicious. Dad made the best ribs I’ve ever tasted on the new smoker he and Mom got for Christmas; since I’ve moved to California they’ve been rubbing it in about all of the food they’ve been grilling. We pigged out by the pool, dripping sauce everywhere.

After the holiday, we headed down to Disney World and stayed at Fort Wilderness Resort, where we had a great time. We camped next to some friends, who steamed oysters one night. Man, I love oysters! They just threw them on the picnic table and we all went for it! Gee, now that I think of it, most of my trip was centered around food. I must’ve missed my family’s cooking more than I realized.

On one of our days down in Disney, I got a horrible 24-hour flu bug. I was so bummed that I couldn’t go to any of the parks; I laid out in the motor home, feeling miserable. Mom and Dad got me some medicine and I tried to sleep as much as possible. The next morning I was better, ready to join back up with everybody and head over to Epcot Theme Park.

When I got back to California, I decided that with my down time I needed to be more productive. My friends work during the day, so I decided to take an online college class on nutrition. As a motocross racer trying to achieve my best performance, I’ve been focused on nutrition my whole life. I figured it was time to learn the science behind it. Wonder what the fat gram content is in a rack of ribs.

What’s in store for me next?