Ashley Fiolek – Off Season, But Still Racing Around 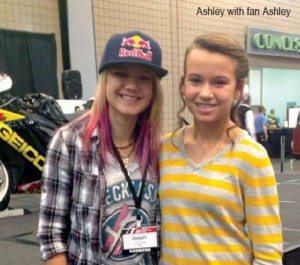 Once again, it’s the off-season. I love it, but it is super busy, too! My friends never seem to understand. They think, well, you are done racing, so you must be really bored. That is not the case. From February through May, I usually train and get ready for the season, and then in May, I start racing, which lasts until September. If sponsorship and benefit requests are asked of me, I normally try to see if they can be scheduled after racing season. Ok…well my mom is really the one who handles all my scheduling. There were so many things to do that I actually had to start keeping a calendar on my phone of when and where I needed to be. Maybe this is because I am 22 now, and with as many concussions as I have had, I would forget everything.

So as soon as I finished in September, there were a couple of red carpet events for the TV show, Switched at Birth, and those were just fun to do and I got to hang out with everyone. I had a short break and then I was off to New York for the Women’s Sports Foundation (WSF) benefit dinner. They have a dinner every year to help raise money to support all of their wonderful programs for young girls, which includes helping them get involved in sports. It is also a time for all of us female athletes to get together and have a great time, and to appreciate what everyone does in her respective sport. I really look forward to this event. It was a little sad this year because we lost a great female athlete, freestyle skier Sarah Burke, who was a wonderful person and who always wore a bright smile at every WSF event. She had a bad fall while practicing for the Winter Olympics. We talked about all the good memories we had of Sarah; she will definitely be missed!

After WSF, the next big thing on my agenda was to head to Las Vegas for SEMA, the automotive specialty products trade show. I was there to do some autographs for my sponsor, Traxxas, which, by the way, is a company that makes wicked-fast remote control cars. I had never been to the show before, but I had a good time in Vegas. It was a whirlwind because it was right before Halloween and I wanted to be back home in Florida, to go trick or treating with my little brother. I wouldn’t miss the tradition for anything. My roommates and I and all of Kicker’s friends dress up and go trick or treating, and then we come home for pizza. It’s always tons of fun.

The following weekend my mom and I headed up to Atlanta for the International Motorcycle Show. We had to be there at 5am on a Thursday to shoot a little video commercial for the show. I worked with Ricky Carmichael and Colin Edwards. We had to work past 2am, but we had a really fun time, just laughing so hard, even though we were all tired. The next two days we came back for autographs and had fun hanging out. I met one girl, Ashley, who did a report on me for her American Sign Language Class. It was really cool. I had sent her some gear so she could dress up like me for her report and so some autograph signing. Her mom brought pictures and we got to talk and hang out during the autograph session. It was really nice to meet her and hear all about her speech.

Right now, I am in California and just finished going to the DRLC (Disability Rights Legal Center) benefit dinner. It was definitely a rad event. I was lucky to have this opportunity to go and receive the DRLC sports award. It was cool to meet many so many people like Kurt Yaeger, Paula Pearlman, and Micky, along with other guests of the evening. There were other deaf people as well, and they thought it was great that we were all together at the event. I also got to catch up with some of the people from ABILITY Magazine whom I had not seen in a long time, so that made the night even better.

After this event, I head back home, and then my mom and I will go to Greece for a TedX event. They hold conferences around the globe for “ideas worth spreading. “I was asked to give a presentation. I’m a little nervous about speaking in front of everyone, but I am thrilled to have the honor of being invited. It will also be my first time in Greece, so it should be very exciting. Then, I am off to Indiana for the “Women in the Winner’s Circle” awards presented by Lyn St. James, Indy racecar driver. I see her every year at the Women’s Sports Foundation event and I am really looking forward to this event…fast driving. That’s what it’s about! As you can see, when my “season is done.” it is not really done. And there is still so much to do!

The Sessions — The 38-Year-Old Virgin