Worth the Flight Delay 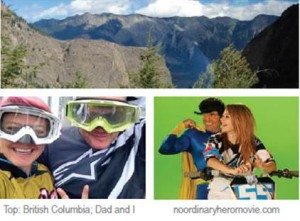 My dad and I were approached by Red Bull and other companies to take part in a remake of the famous motorcycle film, On Any Sunday. We were excited. The movie was supposed to show my dad and I riding together and having a good time, which is how I first got started in the sport of dirt biking.

But the trip didn’t go exactly as planned. In fact, the first day started with a major flight delay. We were supposed to leave Ontario, CA, at 8 a.m. and then fly up to San Francisco en route to Canada. But because of bad weather, our flight kept getting delayed. When there were no more flights from Ontario to San Francisco, the airline supposedly booked us on another flight out of LAX and paid for our taxi fare from Ontario to the LA airport, which is about an hour’s drive west. But by the time we gathered our luggage and headed to LAX, we were cutting it close. When we finally reached our gate, it turned out that no seats had been reserved for us, and they couldn’t fit us on that flight.

We were then booked on an 8 p.m. flight, which wasn’t scheduled to leave for another 12 hours. Although we were told they would try to put us on an earlier flight, we never made it off any of the standby lists. As a result, we didn’t land in Vancouver until after midnight, and didn’t get to our hotel until 1 a.m. We should’ve known then that things were not going to go right for us on this trip.

Since we were already a day late, we rose early the next morning and drove north to the top of a mountain located in what must be one of British Columbia’s smallest towns, Bralorne, with a population of 75. When we arrived at the house in this old gold mining town, I felt like I’d stepped back in time. No Wi-Fi, no TV, no phone service…nothing. The handful of winding, dirt roads were gnarly.

My dad and I were supposed to ride together through the woods, but I thought we were going to die, because the trails were right on the edge of mountains. One false move, and we were going over! It was very sketchy, and not how I remembered trail riding when I was a kid.

However, the trip did have its highlights: I got to ride with my dad like we used to do; we stayed at a beautiful hotel; and in the evenings, we enjoyed hanging out in Whistler, a small skiing/mountain bike resort town that was a lot of fun.

I made it home with a day to spare to go dress shopping for the Hollywood movie premiere of No Ordinary Hero: The SuperDeafy Movie, a family drama starring Marlee Matlin and John Maucere as a character called SuperDeafy. I had a small part in the film

so I invited all my roommates to the premiere. I rented a limo so we could have a great time and not have to worry about driving or parking. We walked the red carpet and then saw the movie. I only knew of my part and hadn’t seen the whole thing come together. It turned out to be very inspirational and is already one of my favorites. We all had a blast. Most people who attended were deaf, so that was fun. If you get a chance, you should see the movie. 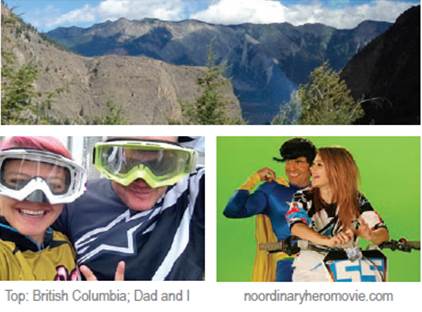