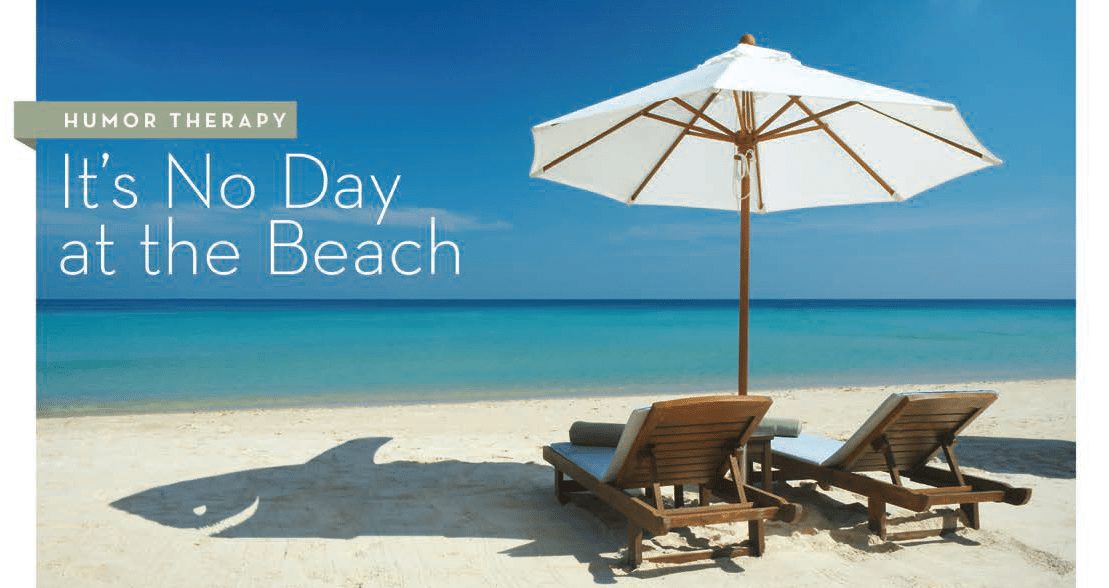 When people want to take a vacation, the most common place is the beach. They rarely say, “I’m going to take the family to the jungle,” or “we’re going to kick it for a few weeks in Damascus”(that’s where the terrorists are hanging out.) So, the beach is the place to go. But is it the best place to go?

The packing is the hard part. Umbrellas, blankets, chairs, towels, books, IPOD, cell phone, sunglasses, lotion, food, beer, it’s a lot to remember. No matter how much you prepare, and go over your checklist, you’re always going to forget something. It’s okay, as long as it’s not one of the kids or, even worse, your bathing suit.

The main thing to bring is that cooler. You can always eat more at the beach; all you need is an excuse to stuff your face with sandwiches. You don’t even think of lunch when you’re at home, but for whatever reason, when you’re at the beach, you can gobble down like six cold cut subs. Just be sure to wait fifteen minutes before going swimming. Of course, what good is a cooler without beer? The beach and beer are like inseparable twins. If you’re on the beach, you can have a beer at ten in the morning. No big deal, it’s the beach. But, if you have a beer at ten in the morning at home, you got some alcohol problems, big fella. Prepare to be blindsided with an intervention. The Intervention is the one time in your life when the people close to you tell you they love you. It’s brutal. The whole time you wish you were on the beach enjoying a nice cold beer.

The main reason we go to the beach is to relax and lay out in the hot, burning sun. A suntan is so important. Without it, who’s going to believe you went to the beach? A good tan tells you, you don’t like the way you look and you’re hoping a change in skin pigment will make you a whole new person. I don’t blame you. Looks are everything. It helps prevent people from backing up and hissing when they talk to you. We’re crazy people. We’re willing to wager the beautiful bronze-look now and risk the possibility of skin cancer later. After all, what’s it all matter when you’re old and ugly?

It’s scary out there in the deep blue. One minute you’re enjoying the bubbly waves and the next minute a piece of seaweed touches your arm and you’re running on water like a track and field messiah. You never know what’s in that ocean. Fish, eels, dirty needles, and those crab thingies. That’s always a treat, to step on one of them. Who would want some crustacean nibbling on their feet? Not me! I guess those things like toe food. Then, some years ago, that Australian dude died by getting a stingray tail shot through the heart. No thank you. I’ll stick to the kiddy pool. Swimming in a kid’s urine is a lot safer.

Walking up and down the shore, looking for shells is always very exciting… well, what I mean is it’s something to do. There’s nothing better than taking a box of shells home and looking at them, smiling, then throwing them away. Collecting them seemed like a good idea at the time, but when you notice all the other clutter in your house, there’s just no room for shells. Like, what are you going to do? Throw out the old broken snow globe, with the little castle in it, to make room for some crusty shells? Yeah, right.

Salt water feels good, but even swimming isn’t so relaxing. Every night on the news there’s some story about some poor slob being attacked by a shark. To me, that could really dampen the vacation if you come out of the water with one arm. It happens. They have a whole shark week on it. And what about the movie Sharknado? That’s scary stuff. If the sharks don’t get you, the jellyfish will. They are invisible assassins. It is funny to watch someone running out of the water waving their arms and screaming in terror. Your first thought is that some beach goer is tripping on LSD, but they’re actually covered in jellyfish stings. They say you’re supposed to urinate on the victim to relieve the pain.

“So, how was your day at the beach?” one asks. “Lousy. Three lifeguards pissed on me,” one responds. “Well, at least you still got your arms,” one concludes.

Also, while you’re in the water you have to be concerned about the undertow (that’s the strong current beneath the surface that can pull you out to sea). One minute you’re laughing and giggling while body surfing, and the next you’re in the middle of the Pacific Ocean praying a cargo ship passes by. The riptide can rip the life out of you. It’s no wonder one spouse is always trying to get the other to go for a dip. “The water’s nice… especially right past the buoys.”

I think the hardest part of going to the beach, at least for women, is finding that right bathing suit to wear. Will it be the one piece or two-piece… or the gutsy thong? After shopping for this suit, there is no doubt the anxious woman will need a vacation at the beach. Being attacked by a shark is nothing compared to showing the world the cellulite on your thighs. But, perhaps the biggest travesty in life is when some big, hairy, flabby man is sporting a thong.

It’s just not right. The sharks never eat that guy.

Sand looks beautiful. It’s so inviting to lay a blanket on it and curl your toes in it. But did you ever try to walk on it on a hot day? It’s like a burning coal walk at a Tony Robbins self-help conference. Every step is followed by a curse word. Some people claim they wish they could take the beach home with them. Well, we always do. After leaving the beach, for months, I find sand in everything that I own. Even the things that never went to the beach with me. How did this sand get in my desk at work? Many moons later, it’s still in your bed. It’s terrible. The worst thing in the world is being hungry and eating a meal, only to feel your teeth grinding on some grains of sand. No, that’s not why we call it a sandwich, or a crunch wrap. I despise sand. It has one purpose only: to make those cute castles, other than that, it’s burdensome. Like that little baby brother that follows you everywhere.

Yeah, sometimes a day at the beach is no day at the beach. On the upside, the best thing about being at the beach is that you’re not at work, which is usually the worst place on the earth, next to the DMV. You can get sand in your crotch, a blistering sunburn, and wrestle with a shark, but it still beats sitting behind that desk listening to a customer on the phone griping that their package hasn’t arrived yet. If you sit around at home doing nothing, you’re lazy. If you sit around on the beach doing nothing, you’ve done something. You went to the beach.