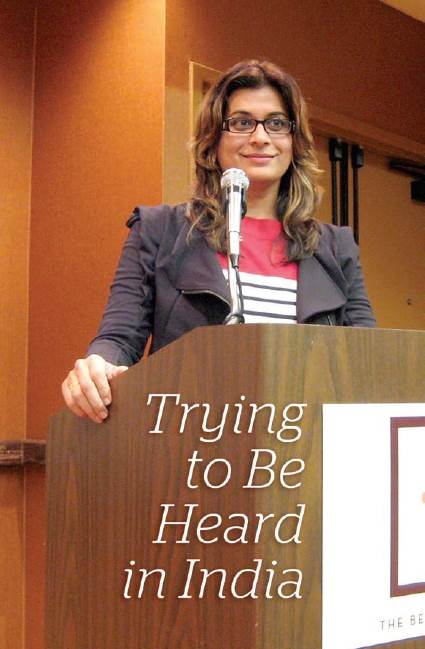 As she listened to the president’s welcome address at San Francisco State University (SFSU) a few years back, graduate student Vidyut Latay noticed something that she’d never seen before, back home in India: a sign language interpreter. Standing next to the president, the person helped carry the administrator’s message to those audience members who could not hear it.

It made Latay wonder what comparable services were offered in Mumbai—where she grew up—and throughout the nation. The answer proved disturbing and provoked Latay to make her 2012 documentary, Beyond Silence.

In her research, the filmmaker discovered that only about 250 certified sign-language interpreters are available in India to meet the needs of roughly 18 million citizens and of the more than 20 languages spoken there, sign language was not officially recognized by the government. There was no Text Telephone (TTY) to help with calls, no instruction through sign language in deaf schools and no colleges for people who are deaf.

The filmmaker also reflected on the fact that TV viewers in India have to read lips to follow their favorite shows, because there’s no closed captioning available.

“For seven years I was a producer and director of a TV network in India,” Latay reflects. At the time, she didn’t realize that her industry was selling her viewers who were deaf short, but now acknowledges it “is really a fault of the system.”

Her realization made her want to do something to make a difference. So smack dab in the middle of Mumbai’s rainy season, the filmmaker flew home in 2008 to begin her documentary. It was pouring as she landed and rode into the city, equipped only with camera gear and a few words of sign language like hello, thank you and sorry.

Luckily her sister-in-law, Vidya Iyer, was studying to be a sign-language interpreter, introduced Latay to people at two local organizations that serve the deaf community: the Ishara Foundation and the Ali Yavar Jung National Institute for the Hearing Handicapped.

Through her contacts, the filmmaker connected with the colorful individuals who became subjects for her documentary. Iyer also helped Latay during the videotaped interviews by interpreting the filmmaker’s subjects’ sign language. As a hearing person, Latay says one of her biggest challenges was going through an intermediary to ask her questions, as well as having to get her subjects’ answers interpreted. It was, you might say, like a children’s game of Telephone, in which kids pass a message down the line. Along the way it can get pretty garbled and be totally mangled by the time it reaches the end. Latay had to spend a fair amount of time seeking clarification about what exactly was said.

One of her documentary subjects was a man who was deaf, named Prakash Khairnar, a fellow filmmaker who shoots lots of video projects around Mumbai. He said that none of his films have any sound and that it’s not at all important to his work or to his storytelling.

Latay found that fascinating, because in the hearing world, filmmakers often concern themselves with sound even more than visuals, reasoning that if you can hear the story you can still tell what’s going on, but if you just see the images, you may not be able to put two and two together.

Another Beyond Silence subject was dancer Pranali who, like Khairnar, declared that she was proud to be deaf. Even so, she sometimes wears a hearing aid so she can listen to performance music and dance on cue, putting her on equal footing with all the other dancers. Otherwise, the artist said she would be happy to only use sign language, which she finds helps her better express her emotions.

One couple Latay interviewed was Sunil and Shweta Sahasrabudhe, who were expecting their second child. They admitted that they quietly hoped the baby would be born deaf, too, so it could be a part of a rich community the young parents find so welcoming. 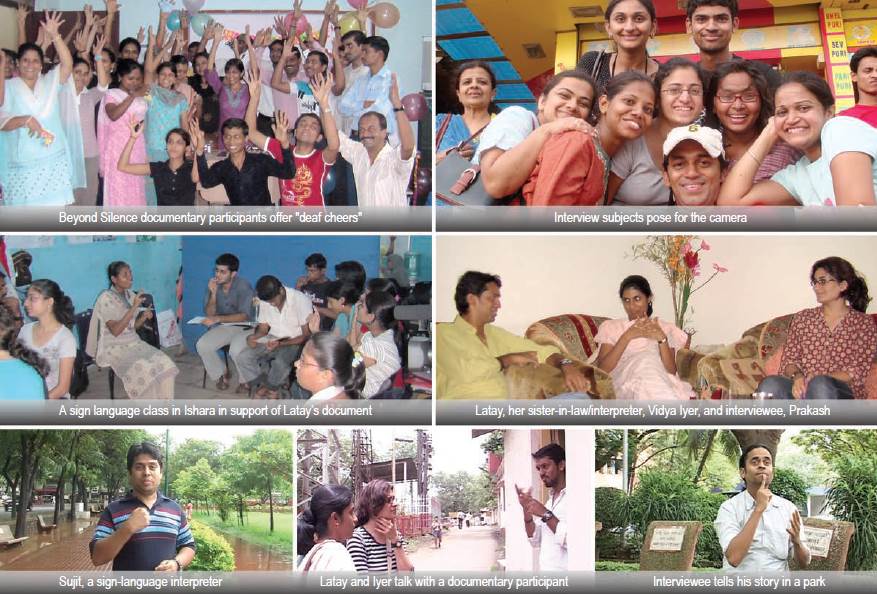 “The Sahasrabudhes are very happy to be deaf,” the filmmaker says, “and felt that it was not an impediment to living their life. Their first child, who was born hearing, is already bilingual; she speaks and also signs.”

Latay’s growing awareness of deaf culture made her decide against a conventional soundtrack for her film. Instead, it relies on such ambient noises as bustling traffic, honking horns and the cacophony of everyday conversations overheard in a crowded city.

The only music is a bit of humming performed during the end credits by the filmmaker’s brother, Salil Latay, PhD, a musician who closes out the film.

Latay also discovered herself in the middle of a running conversation that was more intuited than spoken:

“It struck me that the deaf community in Mumbai is ery confident; it did not exhibit any kind of helplessness or vulnerability, no ‘please sympathize.’ They were willing to fight for their rights,” she explains. Though she finds it frustrating that “in India, socially and politically [there seems to be] no intention to do anything for people who are deaf.”

Latay hopes her film will be a part of the solution. Beyond Silence has screened at film festivals around the world, from Cannes, to Greece, to Los Angeles and recently in India at Mumbai’s National Digital Film Festival, where it drew a positive response.

The filmmaker asserts that her project has the power to bring about change and admits that it changed her,