The Brotherhood of MS 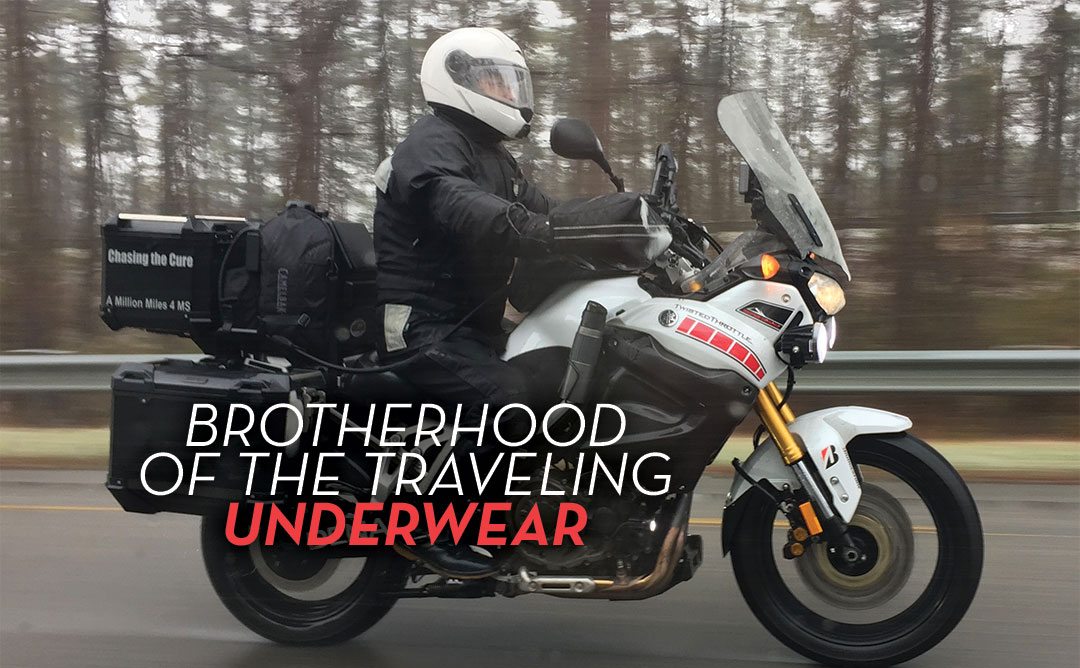 For the past 75 years, while most of the country transitions into spring by swapping out snow shovels for garden hoes, a bazillion bikers from all over the country migrate to Daytona Beach for Bike Week. For most, it’s a ritual that starts by giving up shaving for a week or two, dusting off the leather patched vests and polishing up the bikes before loading them onto trailers for the pilgrimage, even if it’s just an hour away.

I understand not everyone rides their motorcycle like I do, I honestly do, but there was a time when out of state folks would at least pretend to ride to Daytona by parking their trailers in an empty lot a couple hundred miles north and trying to hit every puddle on the ride into town to at least appear like they were riders. As I sit here in the hotel lobby typing this column, I count 40 trailers in the lot, twice the number of bikes! While wondering if the 18” of snow that fell at my house in New Hampshire yesterday would be cleared by the time I roll back into my driveway, I get to listen to three men discuss the tricks and techniques for backing up a trailer.

For the past six years, I have made the trip from New Hampshire to Daytona oddly on two wheels and planned to do so again this year, leaving directly following a patient speaker conference I was attending in Boston. My good friend Scott was driving down to Daytona Beach and had agreed to take some of my stuff down in his car. I now sell T-shirts to help pay my travel expenses, and I wanted to have a few dozen available in Daytona so I dropped them and some extra clothes off at his house a few days before I left.

The conference was put on by a pharmaceutical company, and although it involved compliance and skills training, it was an opportunity for the company to acknowledge and celebrate the important part patient speakers play in helping others cope with their multiple sclerosis (MS) diagnosis and symptoms. For us, it’s a chance to visit and hear each other’s stories.

Between training and eating fabulous meals, I watched with increased intensity the snow and frigid temperatures that crept over New England. The conference ended at noon on Saturday, and as I was preparing my winter gear for the ride to Daytona, I realized my special and very favorite extreme cold weather long johns were missing from my luggage. Clearly a brilliant move of mine to pack my thermal underwear in with clothes I’d left at my friend’s house, now in the trunk of his car and eight hours into his trip to Florida.

As I emerged from the $50 per night underground parking garage and crossed the cobblestone sidewalk onto the street, my bike’s thermometer read 11 degrees. I cranked up my heated jacket and gloves, pointed my head into the 40 mph wind and found my way to the highway.

Despite wearing all three pairs of dress pants I had packed for the conference, my legs were still cold. The thought of trailering my bike certainly danced in my head.

I rode for eight blistering hours, made it to my brother’s house just outside of Washington, D.C. and called it a day. When I left early the next morning, it was 24 degrees, but I expected by mid-morning I would be able to catch up with Scott, and more importantly my long underwear. When I found my friend and his Toyota in the middle of North Carolina, it was 32 degrees and snowing pretty hard. We had been communicating by phone, and he took some photos of me as I passed him on the highway. I took the next exit to get gas and somehow he missed the exit. Getting gas is when I realized how cold and windy it really was, and I struggled to get my wet gloves back on my cold, shaking hands. I returned to the highway and vowed I would catch up to him and get my special thermals once and for all. After about an hour I called him again, wondering why I had not spotted him yet and was informed he had gotten sidetracked in search of a Starbucks. Unfortunately his app routed him to a coffee kiosk in a hospital. He wasn’t happy, but I had no sympathy, for I was now almost 30 miles ahead of my underwear and was not about to stop or slow down for him to catch up. Besides, as I was almost into South Carolina by midday, I figured it would start to warm up soon.

I was wrong again! Passing through the famous South of the Border tourist trap, I could not help myself but to grab a couple of photos of the sign because it was plastered with snow!

I longed for my warm and cozy underwear for the next hundred miles, envying the growing number of bike-hauling trailers I passed as miles to my destination clicked down. It wasn’t until Georgia that the snow had transitioned into a beautiful freezing rain. My electric heated jacket was on high, and the slush that had built up on my windshield began to slide off and plop me in the face shield. It was now 36 degrees, the wind had died down, and I was relieved. Half way through Georgia the sun came out and the temperature reached 50. I got gas, changed to my warm weather gloves and got a coffee, without using an app.

I wasted an hour before heading out once again, letting Scott get within a few miles of me.

For the first time since leaving Boston, I began to enjoy the trip. It didn’t last long. About 30 miles from Daytona the sky turned gunmetal gray and the loud ticks of raindrops began pelting my helmet shell. By the time I was corralled into the bike week traffic, it was a full-fledged typhoon.

Soaked to the bone, I dismounted the bike and tried to shake off the excess water before entering the hotel lobby. As I let out a long sigh of relief, a group of leathered bikers who were intensely watching the weather channel took notice. When the guy with snakeskin boots asked me where I was coming from, I cracked a water wrinkled grin: “New Hampshire.”
“No,” he said, adding, “I mean where did you leave your trailer?”

I instantly became damn proud of my puddle and my 1300-mile adventure getting to Daytona Bike Week.

My biker badge of badass was quickly revoked when my friend burst through the front door loudly proclaiming, “Excuse me, sir, are these your undies?”