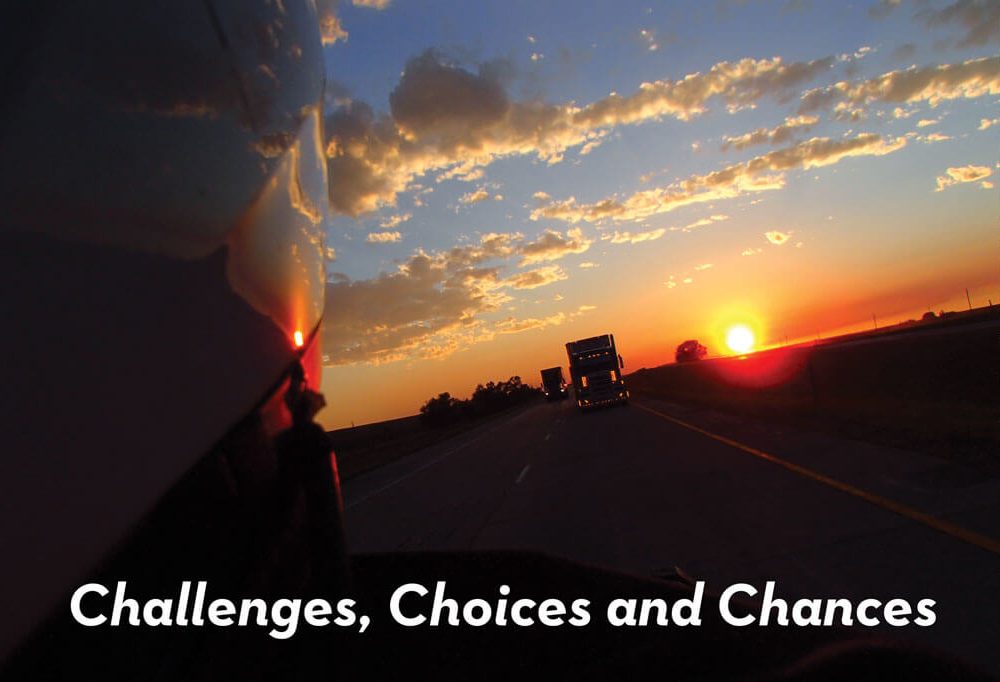 As I sit here in the Salt Lake City airport waiting for an impromptu flight home, I cannot scrape together a single bad thought about the motorcycle I am leaving behind; possibly for good. Well, OK, maybe just one bad thought; I still have 18 payments to make on it!

The bike and I met three and a half years ago, and we soon became fast friends. Over this time, we rode 173,000 miles together through sun, wind, fog, rain, snow, sleet and hail. We have ridden from sunrise, through day and night, to see the sun rise again. We have ridden through every month of the year, in temperatures from -10 to 120 degrees. We rode through all the lower 48 states, across all of Canada and even Alaska. We rode every single mile as a team on a mission to raise money and awareness for multiple sclerosis (MS).

Although I always ride alone, our adventure would have gone nowhere without the support of my sponsors. Twisted Throttle, Aerostich, Yamaha, Bridgestone, BMS Saddles, Spectro Oil and EAZCycle all contributed gear and accessories to help make my journey a success.

As I sit here in the terminal, with a 4-year old having a tantrum behind me and his older sister looking over my shoulder as I type every word, “yes, I’m writing about you”, I can’t help but grin, feeling thankful and proud. How could I feel anything else?
Yesterday was November 6th, and my trusty two-wheeled companion and I set a world record while raising $6,000 for the National MS Society. The Yamaha never complained as I pushed it way beyond any sense of normalcy, logging 2,000 miles in a single calendar day. Incredibly, that wasn’t the world record! The record I set was for riding the most hours in one day. I am the first person to document riding a motorcycle 28 hours in a single calendar day.

By riding from Indiana to Nevada, across 4 time zones on the day we set our clocks back, I was able to gain 4 extra hours before midnight which allowed me to ride the 2,000 mile route all on the same day. I called this extreme and original challenge the “Big Time” ride, and by all accounts it was a success.

I did have serious hesitations heading out on such a difficult ride attempt on my old friend. The bike had been showing signs of wear and developing some odd behaviors and deficiencies over the past year. Fourth gear had worn away some time ago; accidentally engaging it would bring quite a loud clacking complaint. The piston rings had long stopped being efficient; I was adding a quart of oil every 1,000 miles. Sometimes the bike would be hard to start, and the corrosion in the wiring harness would often leave me with a weak or dead battery. The forks were leaking oil intermittently, and the epoxy repair I made to the side of the engine 80,000 miles ago was seeping quite a bit of oil as well. Seals were eroding, and the timing chain had long since stretched past its ability to self-adjust. Of course I never followed the service schedule!

On paper, my bike was not worth a dime, even as parts, as almost every bit of it was worn out. The high mileage and excessive wear and tear equal to 35 years of normal riding had reached every nook and cranny of the machine. To anyone else, taking this bike on such an extreme ride brought a high risk of failure. Looking past the wear and tear, leaking oil, rough running and barely starting issues, I believed my trusty companion had just enough life for one more big trip. Because of its devoted service to the cause, I also felt #1 had earned the chance to share in my historic world record ride. 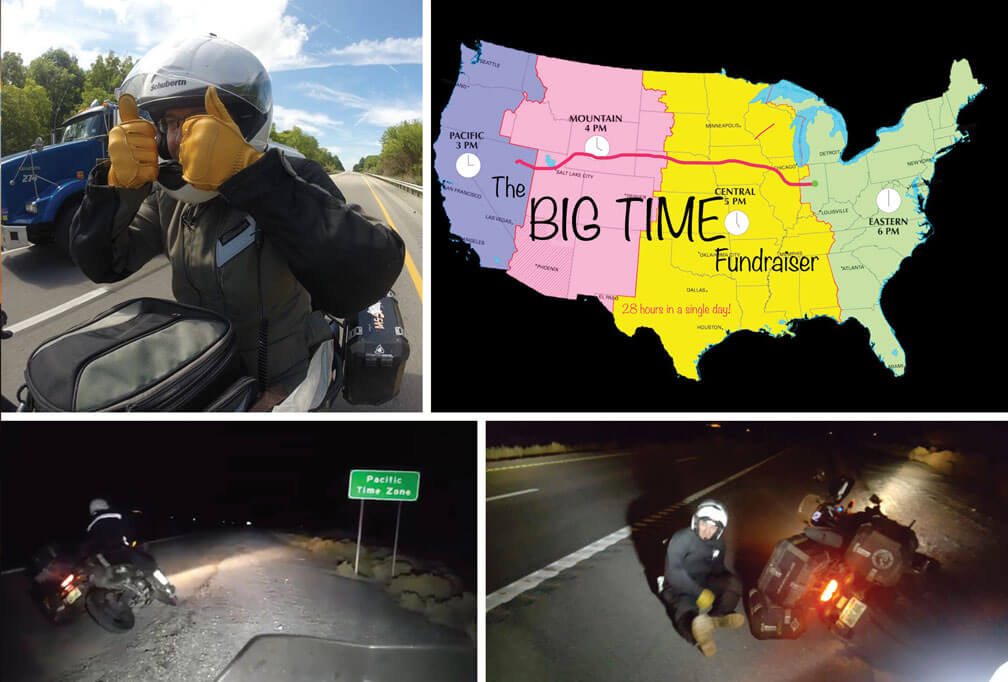 I had a lot in common with this bike. Just because I have some symptoms and problems caused by MS doesn’t mean I should stay home, take the easy road or stop taking risks. My disease and its effects on my brain and body will never define who I am. Some people tried to talk me out of this extreme attempt for fear it may exacerbate my MS, but having a progressive disease only made me more determined to attempt this ride. I never doubted my ability, so why would I doubt the bike’s?

I do have a second Super Tenere donated by Yamaha that is completely set up with all the accessories and luggage,

and this #2 bike would have been a safer choice for this record attempt. After all, if I were to encounter a problem with the bike for even a half hour, I would have risked losing the challenge. Finishing meant a lot. I had a few hundred people who had donated money in my name who believed I could make it. I had some press following my adventure as well as the folks at the National MS Society counting on my making it a successful fundraiser. A few thousand people would be following me live on my SPOT tracking page. A failed attempt might make it hard to raise money the next time. A lot was at stake, and I seriously considered taking the safer bet, the brand new bike.

My followers weighed in on Facebook about which bike to ride, most not knowing the extent of wear on the first bike, yet still urging me to be safe and ride the newer bike. It was my decision, so I put all my money on horse #1. After all we had been through together, I surely owed it a shot at completing this ride. We were a team, and I was not going to make my friend sit this one out. Just because a machine may not be as perfect or powerful as a new one, doesn’t mean it shouldn’t be given a chance.

The morning of the attempt and a thousand miles from home, the bike failed to start on its own and needed to be jumped. Three more times during the event, I had to jump it. I had to add three quarts of oil. By the time I reached 1,500 miles for the day, the bike would barely idle and had lost power. Fuel mileage was way down, and the motor was getting louder. I knew I was pushing it way beyond anything this machine had been built to do, but I never doubted we would finish.

The last few hours were the hardest. My body began to show signs of fatigue; but I pressed on.

To document the ride’s finish, I needed a witness. My friend Kerri Brooks had agreed to meet me at the Pacific Time Zone sign on the highway near Wells, Nevada. As I spotted her and pulled off the road, the extreme toll on my body became apparent. Reaching the fourth and final time zone and the finish of my world record attempt was proudly celebrated and documented live on social media by promptly dropping my motorcycle on its side!

It was only after the finish, when the witness form had been signed and I was safely asleep in a motel room did my trusty horse finally cry “uncle”. Despite repeated attempts to revive it the next morning, the machine has begun a well-deserved retirement, in a lovely garage in Salt Lake City. With all its wear and tear and extreme mileage, the bike was still able to do its job and deliver me over the finish line. What an amazing way to end its career! I will never regret giving it the chance to be part of this historic fundraiser. Well done my friend, well done.

As I bid farewell to the nameless black bike, I smile at its accomplishments and the memories of adventures we shared together. I smile proudly because I know this machine will some day be displayed in a museum as a motorcycle that helped cure multiple sclerosis!

I also smile with excitement because I know bike #2, my white Yamaha Super Tenere is ready for it’s tour of duty, equipped and eager to begin it’s part of my million mile journey, Chasing the Cure.