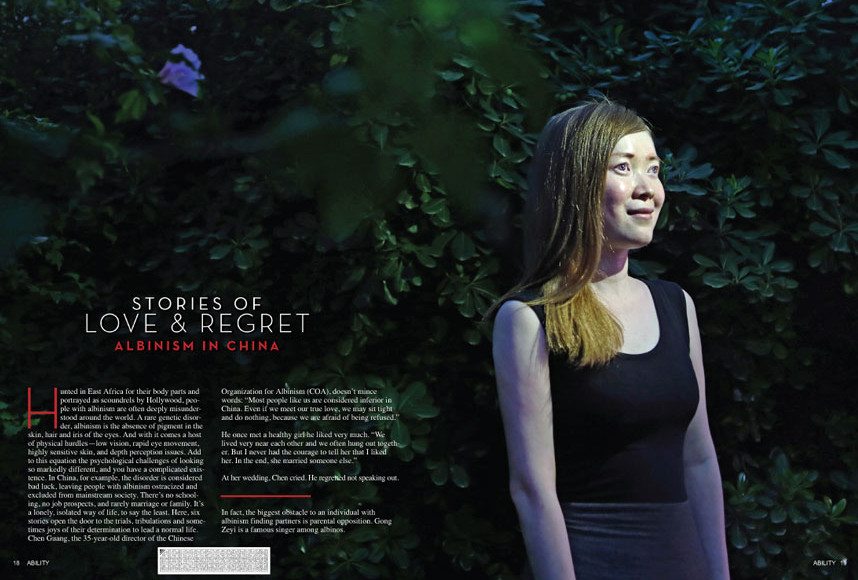 Hunted in East Africa for their body parts and portrayed as scoundrels by Hollywood, people with albinism are often deeply misunderstood around the world. A rare genetic disorder, albinism is the absence of pigment in the skin, hair and iris of the eyes. And with it comes a host of physical hurdles—low vision, rapid eye movement, highly sensitive skin, and depth perception issues. Add to this equation the psychological challenges of looking so markedly different, and you have a complicated existence. In China, for example, the disorder is considered bad luck, leaving people with albinism ostracized and excluded from mainstream society. There’s no schooling, no job prospects, and rarely marriage or family. It’s a lonely, isolated way of life, to say the least. Here, six stories open the door to the trials, tribulations and sometimes joys of their determination to lead a normal life.

Chen Guang, the 35-year-old director of the Chinese Organization for Albinism (COA), doesn’t mince words: “Most people like us are considered inferior in China. Even if we meet our true love, we may sit tight and do nothing, because we are afraid of being refused.”

He once met a healthy girl he liked very much. “We lived very near each other and we often hung out together. But I never had the courage to tell her that I liked her. In the end, she married someone else.”

At her wedding, Chen cried. He regretted not speaking out.

In fact, the biggest obstacle to an individual with albinism finding partners is parental opposition. Gong Zeyi is a famous singer among albinos.

He met Huang Jin, a non-albino, when he competed in the finals of a talent show in 2010. They fell instantly in love. Huang Jin sacrificed a lot to be with Gong Zeyi. She gave up her dream to sing with the Peking Opera in order to help him. “Gong Zeyi is not sociable,” she says. “He does not have a family to support him, so I need to accompany him and give him a hand when needed.”

However, their relationship did not receive the blessings of Huang Jin’s family. Her father did not approve of her marrying Gong because albinism is a genetic disorder, which he felt would harm any children they might have. Although the couple tried all sorts of ways to persuade her father, their efforts were in vain. They began to fight and quarrel over the issue.

Months later, they broke up.

Wen Jinsheng is also a singer from Guang Xi Province. Unlike other albinos, he firmly believes he will marry a girl one day. “I am not any different from others except for my hair and complexion. That’s all.”

Wen Jinsheng moved to Beijing because he could not find a job in Shenzhen, where he met his girlfriend Shen Wenjing, who had met the special looking stranger three times. The first time was outside of Beijing’s National Stadium. The second time was at a crossroads when Wen Jinsheng was lost in his singing and she gave him 20 yuan. The third time was in a subway food court. After a few words, Wenjing asked him: “Do you have a girlfriend?”

Wen Jinsheng rose to his feet and looked the girl up and down, then said: “Okay.”

They began to date and gradually fell in love.

But Shen Wenjing’s friends and parents didn’t care for Wen Jinsheng. Her parents especially didn’t like him and often turn their back on him. But Wen Jinsheng refused to give up. He did a lot to make her parents happy. As he told them: “I will marry no one but your daughter!”

Eventually, his efforts paid off. Her family accepted him and they married. Their first child is due soon.

There is another story of a man with albinism who loved a healthy girl and wanted to marry her. But the girl’s parents didn’t agree, so they decided to have a baby first and force her parents to accept their relationship. The couple eloped, but later the girl’s parents found her and coaxed her to have an abortion. Since then, the couple parted ways.

What a tragedy. “In the Korean TV series, parents don’t listen to their children. Even they don’t agree, as long as the lovers are determined to stay together, no one can tear them apart. It is the business of the children, not the parents,” says Guan Lu, a founder of COA.

Guan Lu’s wife is a former colleague whom he worked with when he was employed by a public service organization. “She was pretty and kind to albinos when I met her.” After several months of dating, they married. “Since a long delay may cause trouble… I never went to her home before we got married.”

His wife comes from a small village. Her father is a doctor who happens to be very open-minded. He did not oppose them, and he was the only man in his wife’s family who attended their wedding.

When it came to societal pressures, Guan Lu said: “At that time, people were very scared of the disorder. When people saw us, they tended to scream and run away. Nobody wanted to sit with us on the bus.”

His wife, however, was quite determined to have a baby. “No matter whether the baby is typical or not, I will love the child.” A doctor told him that albinos could have healthy babies. Soon after, they had their first child, a healthy baby. 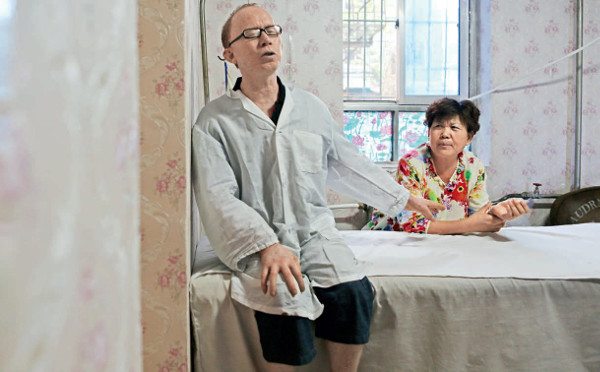 Bo Nailun, 58 years old, runs a clinic in Xi’an city. He lives with his wife in a small house.

Although he’d always been a good student, he was not permitted to take the school entrance exams because of his albinism. So he had to drop out and join the work force when he was still young. He worked as a buyer, a salesman, as well as did hard manual labor. But now he is too old for such work, so he opened a small clinic.

His father once told him to marry a tan girl from a remote place. His home was in a small village where many people, including his parents, intermarried. Thus, he was born with the disorder.

His wife came from Henan, a province next to Shanxi. Her brother was in the army and had a car accident, so the family was in need of money. Her parents arranged a blind date for her with Bo Nailun, because as long as she married, tradition dictated that her husband’s family would give her family money.

Soon they married. But several days later, his wife asked for a divorce. After all kinds of persuasion, his wife finally came back. A year later, they had a baby.

Now they live a happy life in this small place with two lovely children. His wife is also his assistant in the clinic. Mr. Bo looked at his wife and smiled, “Now she is too old to run away from me.”

Some with albinism find their soul mates within the albino family. As Chen Guang says, “Maybe because they have the same genetic condition they therefore have less pressure. “

In 2014, a number of albinos found love at an albinism forum in Xi’an. “It seemed that they came to have a blind date with one another. The forum became a group blind date,” explained Cici, a participant in the forum.

“In fact, we don’t encourage albinos to marry albinos,” explained Guan Lu. “On one hand, they both have the problem of poor eyesight, and they cannot help

each other in life. On the other hand, their babies are very likely to be albinos. So we usually advise them not to have children.”

Sometimes this kind of combination produces more problems. A 24-year-old girl from Inner Mongolia loved a boy who was also an albino. “In the beginning, I was very excited,” she said, “We had so much to talk about, and he was very considerate.” But her mother did not allow them to marry, so they eloped in Beijing.

They tried to find a job, but no one wanted to hire people like them. They had no choice but to open an e-shop on the Internet. Their life was hard. They began to fight over trivial things. Finally, they tired of each other and ended their five-year relationship.

Eventually, the girl began to understand her mother’s point of view, saying, “She didn’t discriminate against albinos. She just wanted a healthy man to take good care of me. She didn’t want me to have such a hard life.”

She is hopeful for her future, however. “I believe I will find my Mr. Right someday,” she said. “But one thing is important. I will never marry a man whose family wouldn’t allow us to stay together. Otherwise, life will be very hard.”