Wang Kun is a renowned oil painter born in western China’s Jilin province in 1970, he contracted polio at a young age resulting in mobilty issues due to weakness in his legs. In recent years, his work has been exhibited internationally and he’s won numerous awards.

For the artist, time is like a paint brush and life itself places layers of color on the canvas, concealing some of our memories.

One area of the painting would be of Wang as a toddler who contracted polio, turning a mischievous boy into a listless one who lay in bed all day. He read picture books like The Red Lantern and Romance of the Three Kingdoms to pass the time, savoring their vivid characters, animals and flowers.

One day, he used his grandfather’s thin cigarette paper to cover a page and trace a character. The more he drew, the better he became. During Chinese New Year, he would draw all the lucky symbols, from lotus flowers to a chubby boy holding a red carp.

When Wang was old enough for formal education, many schools wouldn’t accept him because of his disability. It wasn’t until he was eight that he was finally enrolled, but only after his father brought his paintings to the headmaster to convince him of his son’s talent.

In his spare time, Wang continued to draw. One of his father’s associates who studied drawing at a community art center began to teach the young man how to draw and how to use color. Since they didn’t have plaster models to use, the teacher carved models out of mud. Then they brushed it with a white substance to make it resemble plaster.

Whenever his parents saved up some money, they took Wang to see doctors to determine if anything could be done to help their child become ambulatory. After numerous appointments and various medications, the young man was finally able to use crutches to walk. After he finished studying drawing with his first teacher, he attended Jilin College of the Arts in Changchun in 1986. With room and board, tuition was roughly $325 for a one-month crash course, about 10 months’ worth of his parents’ salaries.

Wang spent three years learning Chinese painting and calligraphy. He expected to be accepted into the Central Academy of Fine Arts in Beijing and major in interior design. Although his scores were high enough, he was rejected because of his disability by several schools.

Since no school would take him, he remained at home in Jilin, drawing. There were many, lonely days. His tape recorder played only two songs. When he was feeling helpless and depressed, he would listen to A Bing’s recording of “The Moon Mirrored in Erquan.” When he felt calm and happy, he listened to Richard Kerry Friedman’s song, “Destiny.” In these moments, he felt like an eagle ready to soar.

He was also determined to move beyond traditional Chinese painting, which focuses on nature or the mood, and is not used to express deep feelings. “Since I felt helpless with my body, I wanted to find something to help release my frustrations,” said Wang. So he switched to the colorful and expressive medium of oil paint.

Since his home in Jilin was too small for Wang to paint on large canvases, his dad asked a friend to help build a small studio next to the family’s home. They also made a portable lamp out of an old recycled steel pipe so Wang could sketch at night. It was in his studio that the artist would paint until two in the morning, which has since become his routine.

He was grateful to have a place to work, yet these were still difficult times. Harsh words about him filtered through his studio walls. Not only would he be unable to take care of his parents, some people gossiped loudly, he had spent all of his parent’s hard earned money on art supplies.

Some suggested that a simple table would have been good enough for him to do traditional Chinese painting and that the Western style oil painting, which required hours of standing in front of a large canvas, was too challenging for someone with polio. Wang’s muscles had atrophied, so it was hard for him to keep his center of gravity. Every three or four days, his armpits would swell and bleed from leaning against his crutches while drawing. When his weakened body could no longer stand, he would fall to the ground.

He spent his savings of roughly $163 on a new set of plaster models. To keep up with the art world, he subscribed to leading national art magazines. He also ordered supplies from fine art publishing houses in China.

His first oil painting was from his heart: There was not one intact object in the painting; the legs of the plaster model were broken, the ears were incomplete and the cup was cracked. During this period, Wang had nothing but a dream, a pile of paintings and yet he refused to give up. To remind him of his vision, he deliberately added sheet music from one of his favorite songs, “Destiny,” in the lower left corner of the painting.

In 1990 his work, “Harvest from the Black Soil,” was featured in the Chinese magazine Art Grand. With just over $5 as his royalty, the boy who had never cried over his illness was finally moved to tears over his modest success. His work began to appear in a variety of publications. Although he was a fledging artist, the feeling he conveyed through his brush strokes was beginning to reflect a growing maturity. 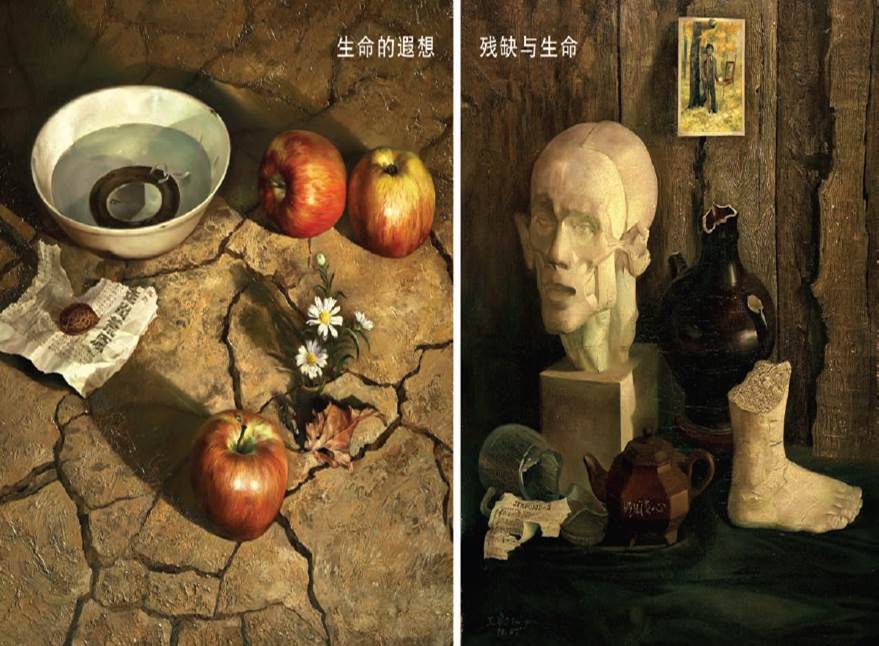 One day, a friend who was a professional painter visited him and made a powerful suggestion: “You have to leave, otherwise you’ll bury your talent here.” His friend spoke of Yuanmingyuan Art Village, a place where artists in Beijing were free to explore their creative expression. The idea excited Wang. However, he didn’t follow the advice at that time. It was a completely different impetus that would eventually inspire him to leave home:

In the winter of 1993, Wang saw an advertisement for painters in Beijing. He mailed a photograph of one of his pieces and a cover letter of introduction. Two weeks later, he received a reply. The company informed him that his talent was exceptional, and that they would give him a place to make and sell art reproductions, and also find him a place to live.

Wang remembers the first time he came to town. “I am finally here in Beijing,” he thought. This was back in 1994 when he was just 24 and eager to make his mark on the world.

At the Beijing Railway Station, waves of weary people exited its doors moving hastily like worker bees, their eyes filled with the hope of finding opportunity in China’s capital city.

None of the people rushing past him knew how far he had come, nor how much he had struggled to get to where he was. Using crutches to hold up his thin frame, he appeared lost amid the steady tide of commuters. He wore a military overcoat and carried a drawing board and box. His hand clutched a piece of paper with the address of his new job at a reproduction house.

During the first two months, his paintings sold slowly. He had to pay rent and money was tight. Most of the time, his meals consisted of instant noodles. For a change, he would eat cucumber spread with soybean paste. With a heavy workload and substandard nutrition, he was depleted and could not stand for long. He once experienced cold sweats and collapsed.

Still Wang worked every day. His pieces became among the best and his pay rose considerably. But he was painting reproductions of others’ work, and Wang felt his dream was wilting from this tiresome job. Overall, it was a frustrating period for the young artist from Jilin.

Outside the confines of his restricted world, however, local art communities, various salons and art exhibitions were booming in Beijing. Artists shared new art styles, fashionable theories and technology. Encouraged, Wang knew it was time for a change.

By early autumn, as the amber leaves of the Gingko trees blanketed Beijing, the artist resolved to leave his job. He needed a new beginning in order to follow his passion, so he moved to the Yuanmingyuan Artist Village. Despite the high rent and cost of art supplies, he painted day and night, whenever inspiration struck.

At that time, there was a growing gap between rich and poor village artists. Wang disdained commercial art and it took a long time for his remarkable anti-commercial works to be fully appreciated. The most expensive of his paintings was of a Qing Dynasty princess, which sold for about $250. But he was still often short of money to pay for his living expenses, so he sometimes sold his paintings for as low as $7 to dealers. Yet he remained singularly driven and utterly devoted to his work. His physical challenges continued to plague him. Life was not easy, especially during the winter months when he struggled to walk on crutches along the snowy, slippery roads. 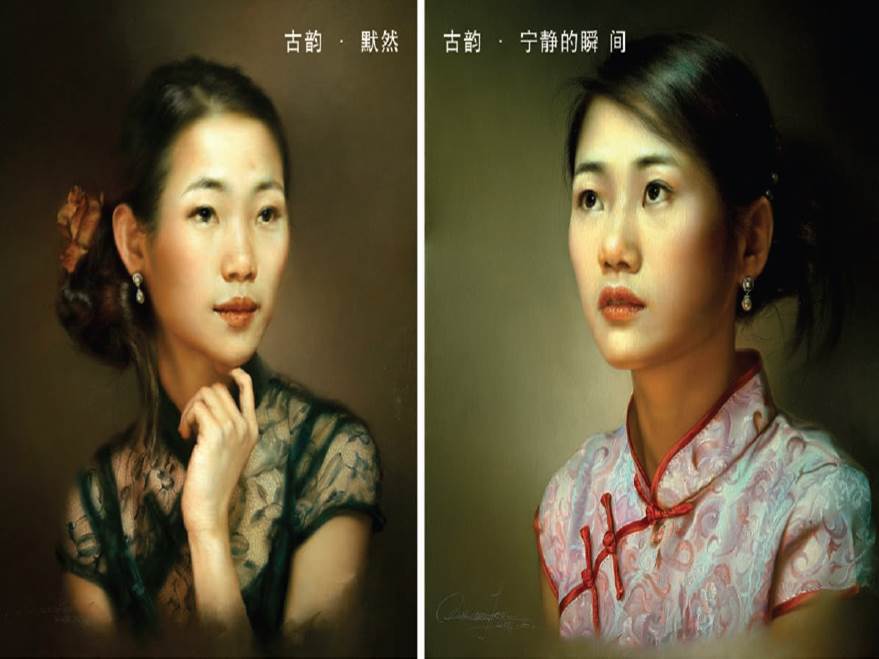 Within the village, a small group of classical realism artists from all over the country had come together, sharing emotions and ideas about art, just as ordinary people talk about daily necessities. They would gather to drink wine and eat, paint autumn leaves or pick peaches in Pinggu. They would pick Wang up at his home, carry him out and put him on the back seat of a bike and head out together.

In those days, time was like fire and Wang was lit. His painting techniques and mode of thinking evolved. Gazing at his work, he reflected, “I see myself, my crutches aside, jumping in a sunny field…”

By 1995, the artist’s oil paintings were finally hanging in a professional art gallery.