Music lovers close their eyes to savor a performance, which seems to make the melody and charm linger. But if all the actors on stage had their eyes closed during a performance how would that affect the audience? In fact, there is a troupe in Tianjin, China, where most of the actors perform with their eyes closed. The majority of them are blind, but their staged “crosstalk” is meticulously choreographed and provokes as much laughter as a comedic performance by a troupe anywhere.

“What will we talk about next time?” an actor teased before one show even ended, trying to get a feel for a subject matter that might interest the audience. “I won’t tell you!” his fellow actor teased, causing the audience to roar with laughter. This comedian, flute player and singer is the celebrity, Mao Di, who established the A Place of Hearing and Smiling Crosstalk, the first of its kind in China to be organized by actors who are blind.

When that night’s performance started, the sounds of Mao Di’s melodious and joyful flute quieted the rowdy crowd. Like a forest of singing birds, the sounds emanating from the instrument were at times gentle and at times sonorous. As each song ended, the whole theater burst into applause.

Before the hostess could even get on stage, Mao, wearing a long silver Chinese gown, had already revealed the theme of the crosstalk.

An Early Start
“I was born in 1981. When I was two years old, I held a bamboo skewer in my hand while roaming the streets. Walking carelessly, I fell and the bamboo skewer went into my eye. Later, due to cross infection, I lost the ability to see through my other eye.” Mao habitually explains this childhood incident as if putting on a crosstalk performance. It already seems like a very distant event to him. Even though he cannot physically see, the audience takes in his handsome face.

A few years after he lost his sight, Mao enrolled in Tianjin’s School for the Blind. At the age where everyone was out playing games, he was interested in playing the flute, which, you might say, became his favorite toy.

At 10 years old, he was putting on performances that were quite popular. The Chinese Blind Persons Association tried its best to make sure this talented young man received a formal college education, writing numerous recommendation letters on his behalf to China’s Music Conservatory. But the school had never educated a student who is blind, and felt that it did not have the facilities to fulfill his academic and personal needs, while guaranteeing his safety.

Mao felt so passionate about attending the conservatory that he went to the school’s administrators and shared with them his desire to study there. “Blind people do not have a set of good, bright eyes, but they have a good heart,” he reminded them. “I hope that society can identify with individuals with this type of disability.” The school was moved by his sincerity, made an exception and let him enroll. Even then they only let him audit classes.

Mao was satisfied with the opportunity, and was their most diligent student. When he couldn’t read music scores, he recorded them and listened to them over and over again. During his four years there, he “translated” two large boxes of music materials for himself, which gained him the admiration of every teacher at the conservatory.

“The teachers could not understand Braille, so they had to use the question-and-answer method to test me on the materials,” he recalls. “According to my teachers, my answers were as good as any other student’s if not better.” It was not until Mao’s senior year that he was accorded formal student status.

In 2004, he took part in the closing ceremony of the Paralympic Games in Athens, Greece. In 2008, through the recommendation of the China Disabled Art Troupe, he was fortunate enough to attend the Beijing Paralympics’ closing ceremony. There he played a song called “Gain,” which was well received by more than 100,000 spectators. The media gave it a positive review, as well, saying that it deserved a gold medal for best art performance outside the formal Olympic events.

He also recorded a number of songs, including The Sound of Bamboo, Ink Style Love and Flute Language and Love. The public enjoyed the music, and some even said that when they heard it, they felt closer to the sun.

Village Folk Artist’s Crosstalk Dream
After he graduated college, Mao became a member of China’s Disabled People’s Art Troupe, which allowed him to focus on folk music. But he also had a dream to perform at crosstalks. 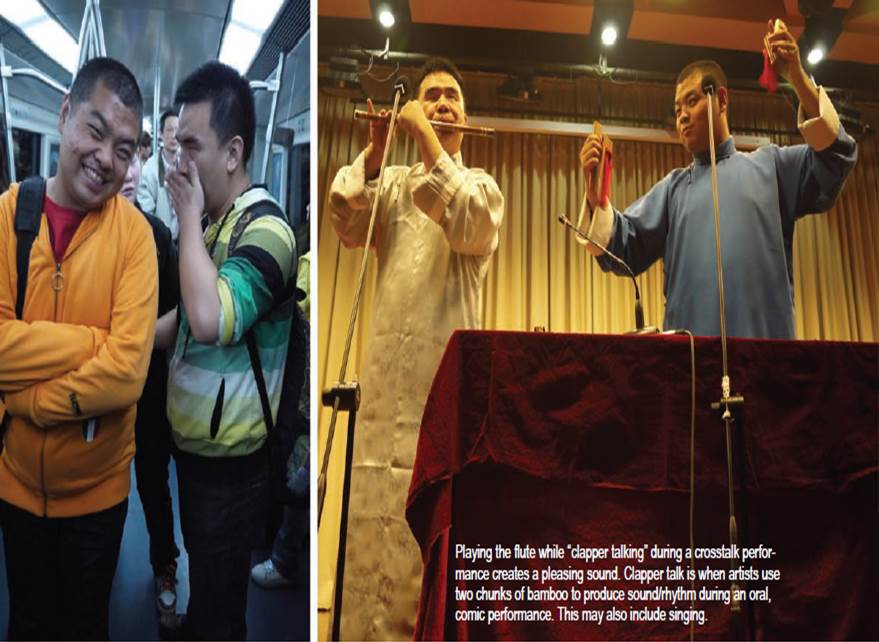 “A classmate of mine, Mu Chengpeng once said to me, ‘Since you like crosstalks so much, why don’t we create a group?’ Mu Chengpeng is a good clapper talk performer, says Mao. He and his family opened a massage parlor. When they have down time, Mu likes to clapper talk. His 4-year-old daughter, Mu Dejia, also enjoys it, and started to perform it at the age of three. She has already written some of her own clapper talk scripts. On stage, she is calm and composed with the poise of a grown up.”

Mu liked Mao’s idea for a crosstalking heart, which encouraged Mao. At the time, they had just coincided with another wave of demand for teahouse crosstalk performers. Yet another of them, lead by Guo Degang, had already succeeded. Mao really wanted to use this opportunity to make his dream career come true. But, the obstacles he could face made him think twice about his decision. A blind crosstalker, was that possible? Would anybody come to his performances?

Yet his dream was slowly coming true, despite all the obstacles. Mao put his heart into creating a blind crosstalk society. He had a few goals he wanted to achieve, and he spread the word: “We are disabled artists who want more people to see our artistic talents. We want to change how able-bodied people view us, and also to earn a living so we can support ourselves. Performing crosstalks is something we can do!”

It took over a year before the blind people’s crosstalk society was launched. A Place of Hearing and Smiling Crosstalk was finally established in 2010. “Wen, means hearing, xiao means smiling. We hope that our audiences will smile when hearing our crosstalk,” Mao says. “This is what Wen Xiaoxuan is meant to be.”

Music and Crosstalk Remix
After a great deal of preparation, Mao’s first crosstalk performance at a teahouse in Beijing made a deep impression on his audience. “The actors worked extremely hard and the results were very good!” said the Teahouse manager who, after seeing that the group consisted of individuals with a disability, generously offered them the space to perform. That venue was only available to them for two months, and then the troupe faced the obstacle of not having a place to perform.

Go back home to Tianjin? This question popped into Mao’s head. Almost everyone in the group was from there. Every time they had a performance, members of the group had to make the trek to Beijing, even though travel was especially difficult for a person who’s blind. The cost was also a burden. Mao finally made a decision: Go back to Tianjin!

After he found the Tianjin Peace District Cultural Palace, things went exceptionally smoothly. The Cultural Palace provided a free space for Mao’s group to perform long term. Says Mao: “At first, we engaged in some profit-making by doing group purchases for our performances, but then we decided to stop. Since we are trying to promote disabled individual’s art talents, why do we need money?” All the actors in Crosstalk Society agreed to perform for free.

Whenever people who were blind came to Mao wanting to participate, he told them, “We don’t have much money here!” But they were still eager to join the troupe. A lot of them worked at massage parlors or for lawyers during the day, and performed during the evening after they’d left their day-jobs for the evening. Mao was touched. He knew that his troupe must be really dedicated, since they were willing to work just for the love of it. 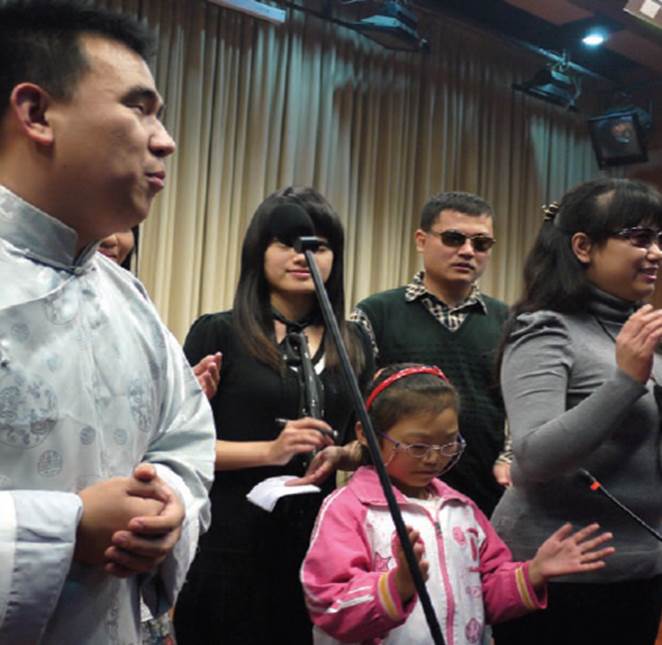 The young actor and the Tianjin Crosstalk Radio host, Qiu Yingjun, have become artistic advisers to the group. Mao has paid visits to people like Guo Degang, hoping the latter would also help teach his young actors. The Crosstalk Society has continually become stronger. Students from Tianjin College of Traditional Chinese Medicine and Tianjin University have participated in their group, too, as have students from Yaohua Middle School and Nankai Xiangyu Middle School. Mao says: “Having able-bodied people included in our performances provides diversity, a stronger network of support, and deeper relationships.” Thus far, there have been 15 to 16 professional actors who have performed in the Place of Hearing and Smiling Blind Crosstalk Society.

Before each performance, the actors would gather early at the theater to take turns rehearsing. Mao would be busy ordering meals, hanging posters, and greeting friends who came to listen to their crosstalk performance. The actors who were not performing at that time would be mixed into the audience, helping to applaud and cheer their fellow actors on the stage. Mao was the best at rousing the crowd, joining in with the audience and laughing the loudest. Whenever there was just a small crowd in the audience, he would direct his actors to fill in. “The most important thing in a crosstalk performance is the interaction; cheers from the crowd stimulate the actors.”

Mao knows that his troupe has room for improvement. For instance, their costumes have been called too casual. Sometimes the actors get distracted and forget the words, and noisy sounds effects don’t help. Mao says he has even earned low marks from a former classmate who suggests Mao’s disorganized: “He thinks I don’t know how to manage, which I’ll admit. But we’re all working for free, and as long as everyone is happy doing this, then I’m satisfied.” This kind of carefree thinking is characteristic of Tianjin and of Mao.

He and his group want to develop Wen Xiaoxuan’s Musical Crosstalks, where he’ll integrate the tune of flutes, piano repertoires and written music. This way, audiences will have the combined pleasure of “laughter and music” in one performance. This would also offset some disadvantages of being a crosstalk group that’s blind. A Place of Hearing and Smiling Crosstalk Society performances also open with the tune of Mao’s flute, then some singing, and then some clapper talk performances. In the course of the evening, a lot of musical effects are used to boost the performance.

“We are still testing new ways of performing because the art of language is crucial in crosstalk performances. If there are too many sounds, it will negatively affect the performance.” He is still trying to find good ways to balance the components, making them become one.

This story is part of a series of articles that will be published as an exclusive editorial exchange between China Press for People with Disabilities /Spring Breeze and ABILITY Magazine.