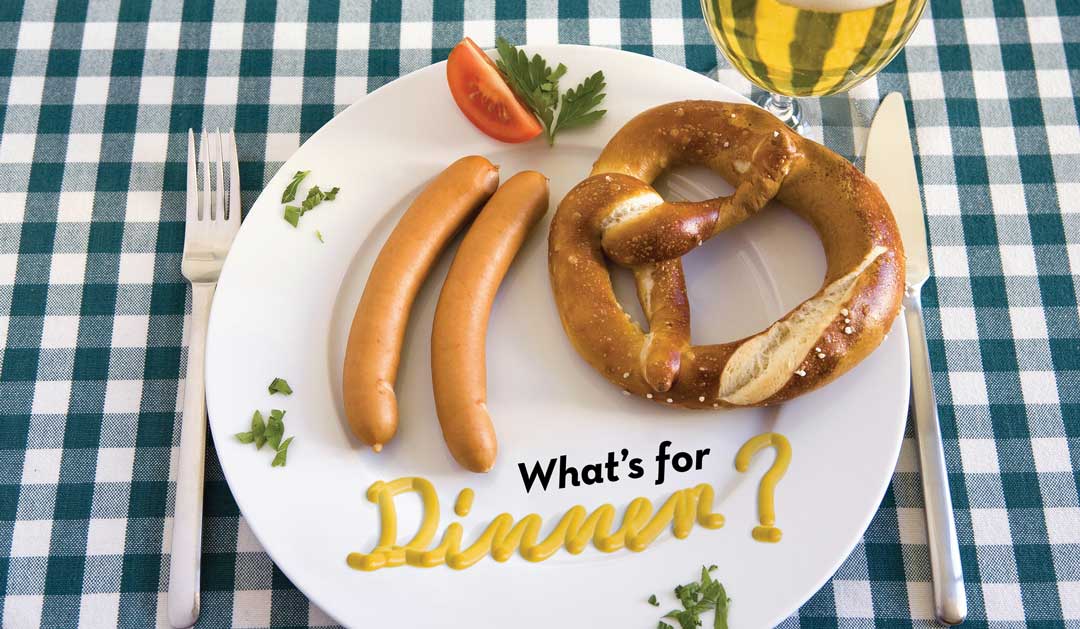 Every night, I’m plagued by the same question, what am I going to make for dinner? When you live alone, cooking for one is not so enticing. If someone makes you a meal, you can taste the love in the preparation. When I’m just cooking for myself, I know there’s no love in it. Sometimes, I don’t even know what’s in it. I just slop things together and hope for a winner.

It’s the same routine every night. Around six o’clock I meander in the kitchen and look in the cabinets, and then the refrigerator for something to whip up. I realize the ordeal is going to take close to an hour, even if I just stick a frozen dinner in the oven. I’m always slightly hungry, so I snack on something like cheese and crackers. It never fails, after that, I’m not hungry for any dinner. Then I go watch tv for an hour, hoping that my appetite will return and give me some time to think about what I want for dinner. Maybe I’ll see a soup commercial and be like, “Oh wow, I didn’t even think of that.” That’s easy. I won’t even have to chop anything. Hell, I don’t even have to open the fridge.

As I contemplate what’s for dinner, an hour morphs into two hours and my mind goes back-and-forth between, “Are you really hungry” and then “Yeah I’m kinda hungry.” But, I know if I don’t eat dinner I’ll be really hungry later and eventually I’ll still have to whip something up. I think deep down I’m hoping a friend will stop by with a pizza—which happened the other night. The problem was, he was one of those friends who’s boring and talks a lot and then doesn’t leave when they’re done eating. Six or seven times I said, “Well, this was fun. We gotta do this more often,” as I moved close the front door. He just sat at the table throwing out some future dates in the next week that would work for him. I told him, “We’ll see, I usually like to make a nice home cooked meal and enjoy that.” He fired back, “Ah dude, I love home cooked meals. Let’s do that tomorrow.” I acted like my shoulder hurt and told him, “We’ll see how my arm feels in the morning.” He finally left around midnight, after I came back into the room while brushing my teeth. I should’ve just whipped up something to eat and not answered the door. Oh well, at least he didn’t charge me for half the pizza. I would’ve had to fake another shoulder injury reaching for my wallet.

Some people like to cook. I don’t. If I spend time creating something, I want people to admire it for years to come, like a sculpture, or painting, or a fruitcake. But, I think even the people who like to cook don’t like to just cook for themselves. I’ll guarantee they’re cutting corners to speed up the process. That’s the good thing about eating alone, everything doesn’t have to be perfect. You don’t have to take time and cut up your meat, just pick it up by your hands and eat it. Nobody’s watching. You just need to make sure it doesn’t become a habit; the next thing you know, you’re out dining in a fine establishment and all eyes are on you, watching, while your mitts cling to a slab of corned beef as you gnaw on it. Then some stuffy lady huffs, “I do declare. Did the baboon escape from the zoo?” right before she faints.

I never plan out my meals, but I should. It would make life easier. But, there’s always been some demon inside

me that likes to do things the hard way. Even if I do decide to make something simple, like pull out a leftover meal from the freezer and toss it in the microwave, it’s still a pain-in-the-ass. I don’t know if I’m just not a dinner man or I’m lazy. I like going out to dinner or having someone cook for me, so I think the evidence is overwhelming that I must be lazy. Case and point, I even find it exhausting to look up a restaurant’s phone number and order take-out. Oh my God, and then I have to go all the way to the front door and open it.

A well-balanced meal is supposed to have a meat, a starch, and vegetables, but sometimes I cheat a little to speed things up. My “go to” meal is a hot dog on a roll and raw carrots on the side. I got the meat (hot dog), I got the starch (roll), and the vegetable (carrots). This takes about 3 minutes and twenty-six seconds from getting the stuff out of the refrigerator, to microwaving, to putting relish and ketchup on the dog. That’s not bad. I can live with that, maybe not long, but, at least it wasn’t time consuming or messy enough to clean up, which is always in the back of my mind.

Perhaps the biggest thing about cooking just for yourself is the clean-up. After putting the time into preparing some dish, and quickly gobbling it down, you’re now looking at all these dirty bowls and plates and asking yourself if the meal was worth it. A five-minute dinner is going to cost you an hour in clean up. I don’t need that. I’d much rather spend my time reading (by reading, I mean the TV Guide to see what’s on HBO that night). Besides, after you finally wash all the pots, pans, and dishes, then put everything away, guess what? You’re now hungry again. When does it end?

I didn’t get many trick-or-treaters this year, which means I have a bunch of leftover candy. I see it sitting on the counter and I think… now there’s an easy dinner I can sink my teeth into. The Kit Kat bar could be the meat, the Reece’s Cup will be the starch, and the M & M’s could be the vegetables. Plus, the only clean up would be throwing away the wrappers. Also, it beats scouring.

I dread having to deal with this dinner dilemma every night. What to make? How hungry am I? How messy is it going to be? I could see me getting married for the sole purpose of having someone to make me dinners. Even if I didn’t like talking to the girl or kissing her, if she told me she makes dinners I’d say, “Here’s your ring.” And when the priest asks the gibberish about loving in sickness and health, yada, yada, yada, I’d lean over and whisper, “Hey Father, can you put something in there about making dinners?”

Well, now it’s about dinner time. Any ideas? I feel like making something nice. I’m going to make a nice call to Dominos.