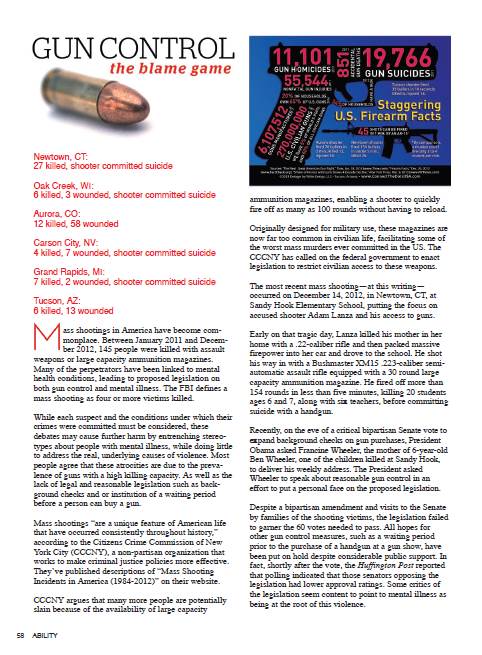 Mass shootings in America have become commonplace. Between January 2011 and December 2012, 145 people were killed with assault weapons or large capacity ammunition magazines. Many of the perpetrators have been linked to mental health conditions, leading to proposed legislation on both gun control and mental illness. The FBI defines a mass shooting as four or more victims killed.

While each suspect and the conditions under which their crimes were committed must be considered, these debates may cause further harm by entrenching stereotypes about people with mental illness, while doing little to address the real, underlying causes of violence. Most people agree that these atrocities are due to the prevalence of guns with a high killing capacity. As well as the lack of legal and reasonable legislation such as background checks and or institution of a waiting period before a person can buy a gun.

Mass shootings “are a unique feature of American life that have occurred consistently throughout history,” according to the Citizens Crime Commission of New York City (CCCNY), a non-partisan organization that works to make criminal justice policies more effective. They’ve published descriptions of “Mass Shooting Incidents in America (1984-2012)” on their website.

CCCNY argues that many more people are potentially slain because of the availability of large capacity ammunition magazines, enabling a shooter to quickly fire off as many as 100 rounds without having to reload.

Originally designed for military use, these magazines are now far too common in civilian life, facilitating some of the worst mass murders ever committed in the US. The CCCNY has called on the federal government to enact legislation to restrict civilian access to these weapons.

The most recent mass shooting—at this writing occurred on December 14, 2012, in Newtown, CT, at Sandy Hook Elementary School, putting the focus on accused shooter Adam Lanza and his access to guns.

Early on that tragic day, Lanza killed his mother in her home with a .22-caliber rifle and then packed massive firepower into her car and drove to the school. He shot his way in with a Bushmaster XM15.223-caliber semiautomatic assault rifle equipped with a 30 round large capacity ammunition magazine. He fired off more than 154 rounds in less than five minutes, killing 20 students ages 6 and 7, along with six teachers, before committing suicide with a handgun.

Recently, on the eve of a critical bipartisan Senate vote to expand background checks on gun purchases, President Obama asked Francine Wheeler, the mother of 6-year-old Ben Wheeler, one of the children killed at Sandy Hook, to deliver his weekly address. The President asked Wheeler to speak about reasonable gun control in an effort to put a personal face on the proposed legislation.

Despite a bipartisan amendment and visits to the Senate by families of the shooting victims, the legislation failed to garner the 60 votes needed to pass. All hopes for other gun control measures, such as a waiting period prior to the purchase of a handgun at a gun show, have been put on hold despite considerable public support. In fact, shortly after the vote, the Huffington Post reported that polling indicated that those senators opposing the legislation had lower approval ratings. Some critics of the legislation seem content to point to mental illness as being at the root of this violence.

The Los Angeles Times recently quoted Senator Mike Johanns (R-NE) as saying that the proposed gun control law would have done nothing to prevent Sandy Hook. “This is really a story about an individual who was severely mentally ill who, for whatever reason, did not get the help that he needed,” Johanns asserted.

“The common ground rests on a simple proposition,” Senator Pat Toomey (R-PA) said a few days earlier, “and that is that criminals and the dangerously mentally ill shouldn’t have guns. I don’t know anyone who disagrees with that premise,” added Toomey, who backed the proposed amendment.

“Studies have shown, however, that mental illness by itself is not statistically related to violence and that people with serious mental illnesses are far more likely to be the victims of violent crimes than perpetrators,” said Jennifer Mathis, who reviewed the medical research on this topic in a series of policy briefs published by the Judge David L. Bazelon Center for Mental Health Law in Washington, DC.

“Despite the facts, many lawmakers and journalists continue to stigmatize people with psychiatric disabilities as the primary concern related to gun violence,” according to Mathis, the deputy legal director and director of programs at the center. But linking this public health crisis to those with a history of mental illness is a distraction from the real problem. There are insidious proposals to limit patient privacy rights of people with mental health conditions based on the notion that parents of adult children with mental disabilities should be able to speak with their adult child’s doctor. This is already possible, but the doctor is not required to violate the doctor/patient privilege by speaking with the parents.

California, for instance, has legal regulations that

Paula Pearlman is the ED of the Disability Rights Legal Center and a visiting associate professor of law at Loyola Law School in LA.

Seizure Dog — She Nose When

Derek Paravicini — He’s Got the Keys to the World