Ever since the late Steve Jobs mentioned he was dyslexic some years back, this developmental reading disorder has acquired a certain caché. As if having dyslexia made you a genius. Nowadays, it seems that one in every four entrepreneurs claims they grew up dyslexic.

Hold on, please. Dyslexia is serious. Rates of school failure are around 15 percent in the European Union and 25 percent in Spain, where I was born. In the US, high school students drop out at a rate of about 6 percent to 7 percent a year, according to the National Center for Education Statistics. Sometimes it is not the child’s fault.

Maybe the kids are doing their all, but nobody notices that they’re struggling and on the verge of giving up. Around 10 percent of the population around the world has dyslexia. One of the earliest ways to detect it is to pay attention to poor school performance. I don’t know exactly how many children drop out owing to dyslexia, but I do know that I want to help with research and applications to decrease that rate.

CAPABLE, BUT UNDER PERFORMING

Having dyslexia as a child is to feel that you’re capable of performing at the same level as other kids, and yet not understanding why you’re having difficulty. You don’t get why people are telling you that you’re doing it all wrong, even though you’re working hard. You believe that the way that you read and write is fine. But your perceptions are clouded by your experience, which only makes sense to you. You need people to show you a better way. In my, case it was a teacher.

Dyslexia has a neurological basis that is unrelated to intelligence. It’s also not related to work capacity or imagination. Still, even if science says so, it’s difficult to stop believing that you were not born with a defect.

For instance, some time ago my boyfriend asked me to marry him. Then, recently, I was awakened by a nightmare in which there was a law that did not allow someone with dyslexia to marry someone without it.

My challenges with dyslexia go way back: I remember having my table against the blackboard at school while the rest of the children were seated behind me. They all thought that I could not succeed, that I was not intelligent enough. I remember inventing games in the corridor because the teacher used to throw me out me of class. I knew by heart the number of tiles in the corridors of my school. I even invented a song that helped me count them, which is what I was doing while the other students sat in class learning.

I believe dyslexia can be overcome and technology can help. This belief helped me move up the educational ladder, finally arriving at a PhD program at Spain’s Universitat Pompeu Fabra, where I studied how to support people with dyslexia using human-computer interaction, natural-language processing and linguistics.

And that’s what we did. In several experiments using the eye-tracking techniques of 150 people with dyslexia, we found that the text presentation and text-content parameters can make a person read significantly faster without losing comprehension. These ideas are already integrated in applications for Android and Web with more than 35,000 downloads, such as the IDEAL eBook Reader.

Given that we dyslexics are not aware of the mistakes we make when we write, we thought: What if we learned how to write from our mistakes? So we designed a new exercise method based on linguistic analysis of dyslexics’ errors. This new method is integrated into a game, Piruletras (Dyseggxia). We tested it in a school with 48 dyslexic children, and after four weeks of using the app, children significantly improved their spelling. The app’s been downloaded over 20,000 times in more than 70 countries.

With the game, we organizad the first contest for children with dyslexia in Barcelona. In teams, they helped each other sovle language problems, sharing their own learning strategies. While schools typically isolate students who have dislexia, in this situation they meet new friends while working to overcome the learning disorder. These are some of their happiest days.

This is what we have accomplished so far, but it’s neither sufficient nor sustainable. We cannot respond to the flood of email from parents and teachers asking for information and technical support. The same with all the necessary software updates. But we continue to seek lasting solutions.

WORKING TOWARDS A SOLUTION 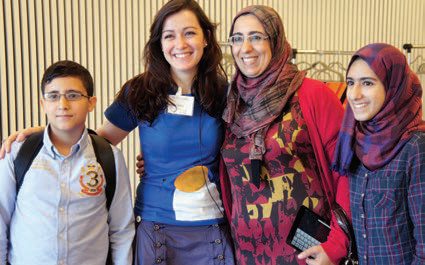 These days, I’m a postdoctoral fellow at Carnegie Mellon University, where we’re researching two main challenges: How to detect dyslexia using human/computer interaction indicators—a crucial problem because children with dyslexia are too often diagnosed after they are already failing. Second, we want to develop a spell checker for people with dyslexia, because current ones do not detect a good percentage of the errors written by people with dyslexia. But even if our research is successful, the next step must be to empower people with knowledge and technology, so that every individual with dyslexia gets the support they need.

I would like to create a “do it yourself” package made up of knowledge and tools. Each person who would like to reduce school failure owing to dyslexia can go to that package and get what they need. Parents could use the tools to help their children. Teachers could take the knowledge and tools to detect dyslexia and assist students. They would be the heroes, as the teacher who helped me was my hero. Teachers could take the guidelines to replicate and adapt the methods to other languages.

Recently, two German researchers adapted the Piruletras (Dyseggxia) method. We’re creating the foundation, Change Dyslexia, to support even wider spread adoption of the method. The largest network of social entrepreneurs worldwide, Ashoka, is now supporting this foundation. My wish is that Change Dyslexia will be a social enterprise serving a movement that includes those who want to complete their education after encountering failure caused by dyslexia.

Can you imagine a school that is proud of having all its children with dyslexia detected and given the needed resources to learn, grow and thrive? Maybe then school will become a place where they get what they need to graduate and live happily.

by Luz Rello
Luz Rello’s PhD thesis, DysWebxia: A Text Accessibility Model for People with Dyslexia was published in 2014 by the Department of Information and Communication Technologies at the Universitat Pompeu Fabra in Spain. In this article, she also referenced two other works: IDEAL: a Dyslexic-Friendly eBook Reader, a paper that she co-wrote with Guarang Kanvinde and Ricardo Baeza-Yates; and A Computer-Based Method to Improve the Spelling of Children with Dyslexia, which she coauthored with Clara Bayarri, Yolanda Otal de la Torri and Martin Pielot.