An Excerpt From Islands and Insulin 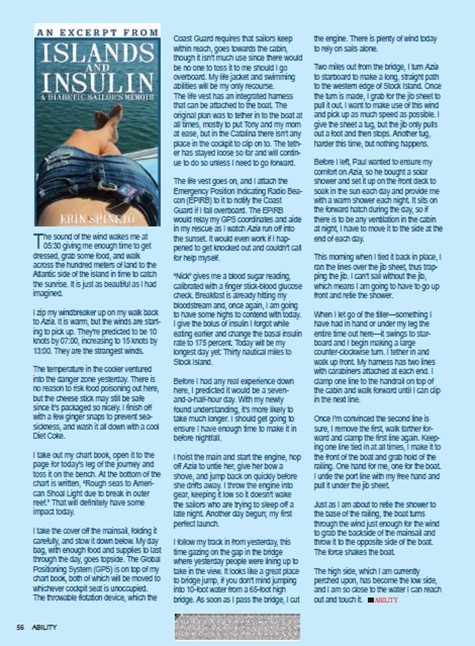 The sound of the wind wakes me at 05:30 giving me enough time to get dressed, grab some food, and walk across the hundred meters of land to the Atlantic side of the island in time to catch the sunrise. It is just as beautiful as I had imagined.

I zip my windbreaker up on my walk back to Azia. It is warm, but the winds are starting to pick up. They’re predicted to be 10 knots by 07:00, increasing to 15 knots by 13:00. They are the strangest winds.

The temperature in the cooler ventured into the danger zone yesterday. There is no reason to risk food poisoning out here, but the cheese stick may still be safe since it’s packaged so nicely. I finish off with a few ginger snaps to prevent seasickness, and wash it all down with a cool Diet Coke.

I take out my chart book, open it to the page for today’s leg of the journey and toss it on the bench. At the bottom of the chart is written, “Rough seas to American Shoal Light due to break in outer reef.” That will definitely have some impact today.

I take the cover off the mainsail, folding it carefully, and stow it down below. My day bag, with enough food and supplies to last through the day, goes topside. The Global Positioning System (GPS) is on top of my chart book, both of which will be moved to whichever cockpit seat is unoccupied. The throwable flotation device, which the Coast Guard requires that sailors keep within reach, goes towards the cabin, though it isn’t much use since there would be no one to toss it to me should I go overboard. My life jacket and swimming abilities will be my only recourse. The life vest has an integrated harness that can be attached to the boat. The original plan was to tether in to the boat at all times, mostly to put Tony and my mom at ease, but in the Catalina there isn’t any place in the cockpit to clip on to. The tether has stayed loose so far and will continue to do so unless I need to go forward.

The life vest goes on, and I attach the Emergency Position Indicating Radio Beacon (EPIRB) to it to notify the Coast Guard if I fall overboard. The EPIRB would relay my GPS coordinates and aide in my rescue as I watch Azia run off into the sunset. It would even work if I happened to get knocked out and couldn’t call for help myself.

“Nick” gives me a blood sugar reading, calibrated with a finger stick-blood glucose check. Breakfast is already hitting my bloodstream and, once again, I am going to have some highs to contend with today. I give the bolus of insulin I forgot while eating earlier and change the basal insulin rate to 175 percent. Today will be my longest day yet: Thirty nautical miles to Stock Island.

Before I had any real experience down here, I predicted it would be a seven-and-a-half-hour day. With my newly found understanding, it’s more likely to take much longer. I should get going to ensure I have enough time to make it in before nightfall.

I hoist the main and start the engine, hop off Azia to untie her, give her bow a shove, and jump back on quickly before she drifts away. I throw the engine into gear, keeping it low so it doesn’t wake the sailors who are trying to sleep off a late night. Another day begun; my first perfect launch.

I follow my track in from yesterday, this time gazing on the gap in the bridge where yesterday people were lining up to take in the view. It looks like a great place to bridge jump, if you don’t mind jumping into 10-foot water from a 65-foot high bridge. As soon as I pass the bridge, I cut the engine. There is plenty of wind today to rely on sails alone.

Two miles out from the bridge, I turn Azia to starboard to make a long, straight path to the western edge of Stock Island. Once the turn is made, I grab for the jib sheet to pull it out. I want to make use of this wind and pick up as much speed as possible. I give the sheet a tug, but the jib only pulls out a foot and then stops. Another tug, harder this time, but nothing happens.

Before I left, Paul wanted to ensure my comfort on Azia, so he bought a solar shower and set it up on the front deck to soak in the sun each day and provide me with a warm shower each night. It sits on the forward hatch during the day, so if there is to be any ventilation in the cabin at night, I have to move it to the side at the end of each day.

This morning when I tied it back in place, I ran the lines over the jib sheet, thus trapping the jib. I can’t sail without the jib, which means I am going to have to go up front and retie the shower.

When I let go of the tiller—something I have had in hand or under my leg the entire time out here—it swings to starboard and I begin making a large counter-clockwise turn. I tether in and walk up front. My harness has two lines with carabiners attached at each end. I clamp one line to the handrail on top of the cabin and walk forward until I can clip in the next line.

Once I’m convinced the second line is sure, I remove the first, walk farther forward and clamp the first line again. Keeping one line tied in at all times, I make it to the front of the boat and grab hold of the railing. One hand for me, one for the boat. I untie the port line with my free hand and pull it under the jib sheet.

Just as I am about to retie the shower to the base of the railing, the boat turns through the wind just enough for the wind
to grab the backside of the mainsail and throw it to the opposite side of the boat. The force shakes the boat.

The high side, which I am currently perched upon, has become the low side, and I am so close to the water I can reach out and touch it.