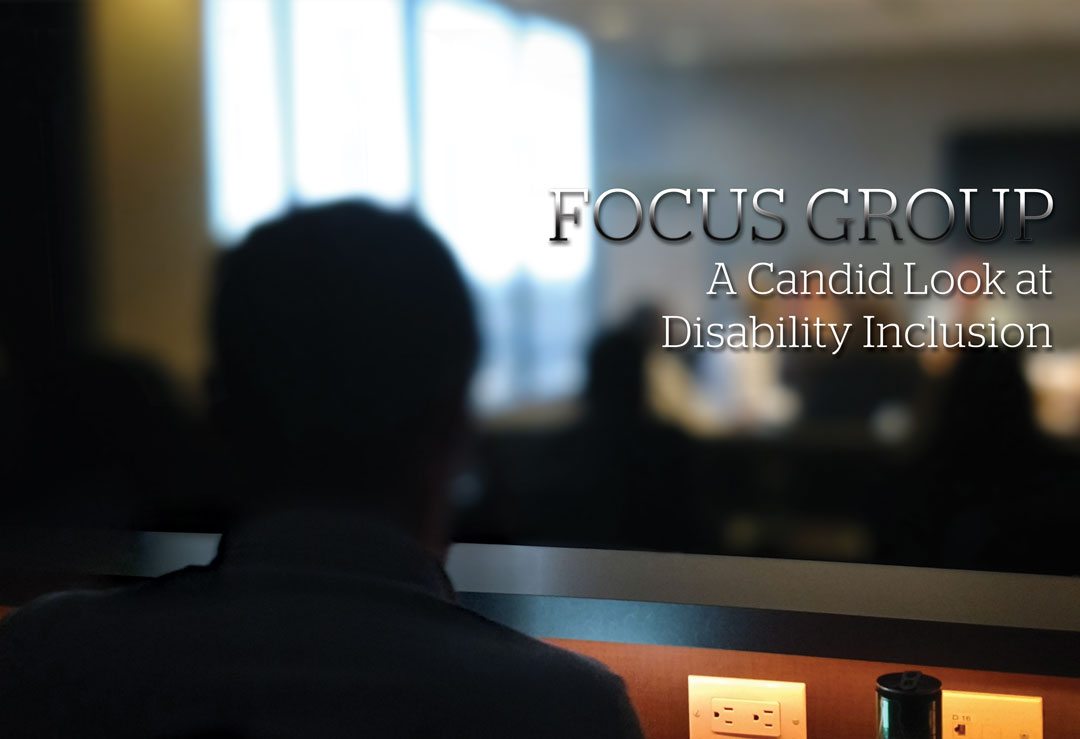 “There are no right or wrong answers. You’re here to represent all of the people who may think like you.” A focus group facilitator reassured a group of Hollywood insiders who are casting agents, writers and film-festival programmers. The nonprofit organization, RespectAbility, formed the focus group to try to better understand why people with disabilities make up nearly 20% of the population, yet account for fewer than 2 percent of characters on scripted TV in 2016*. Participants’ names were changed to encourage more candid responses.

Going deeper into diversity, Meagan asked, “Is anyone getting it right?”

Marty: You see a lot of diversity in advertising.

Nate: I think everyone’s trying; people don’t want their kids to be bigots.

Zoe: And there are organizations out there like the Anti-Defamation League. They’re trying very hard to fight all discrimination, and other organizations, too.

Choir: GLAAD (the Gay and Lesbian Alliance Against Defamation). The NAACP (National Association for the Advancement of Colored People). The ACLU (Americans Civil Liberties Union).

Tony: We did just have our first black president. Our first female major party nominee, so that’s progress since 1776.

Meagan: Do you look to Washington to lead on these issues?

Chorus: No. Not anymore.

Tony: A handful of members in the Senate and House are voices of reason and seemingly some have influence.

Marty: It depends on what I’m working on. In general, the show you’re working on really dictates your audience. I think a lot of networks don’t want to polarize their audience by going a certain way because they don’t want to lose viewership. Ratings count. I know networks want to diversify, but at the end of the day, it’s all about eyeballs on the screen.

Lindi: I don’t know. I feel if you look at some of the late night hosts, like Jimmy Fallon. He plays it very neutral, and that backfired on him. He lost a lot of viewers. And now he’s not nominated for an Emmy, which The Tonight Show has been every year. You look at Stephen Colbert, and he’s calling out Trump every night. And he’s not waiting until it airs. He’s putting it up online because it’s so important. And you see Colbert not being a character [as he used to], getting all these big guys like Scaramucci, calling them out, and not playing it safe. And he’s getting more viewers.

Sandy: I also think he has a different level of popularity coming into his show, which maybe has impacted his ability to maintain numbers. And I don’t necessarily think playing it safe means whitewashing something, but there are some tried and true things that seem to play well in front of audiences and things that don’t. I work in casting, and I have to [determine] if we’re hiring the best person for the best job. And we’re not supposed to discriminate because we’re hiring someone for a job. So, anti-discrimination, the law itself, ends up feeding into the choices we make. And we’re also making a creative choice at the same time.

Meagan: Let’s build on that for a second. So, what, if any role, does the entertainment industry have to play in discrimination, diversity, inclusion?

Marty: Not being afraid to cast people in certain roles. I just traveled down south to the Bible belt during election season with a black guy and an Asian guy; it was for a fishing show. But the network really wanted to reach out to Millennials, and I think it’s really paying off.

Zoe: The television networks and studios are trying. Every single show they cast they are trying to add some diversity, but sometimes a casting director will want someone who’s Latino [and settle for] ‘a third or fourth generation Latino.’ That may be so far from being Hispanic–

Meagan: Is that their way of ‘checking a box’?

Zoe: Yes. They openly admit that. Although in a theater piece recently, Snow White was played by an Asian person. It’s interesting.

Kendra: In theater you have more flexibility. You can have Shakespeare played by a bunch of difference races. In a film, it’s harder to get away with that.

Kendra: If people are supposed to be brothers [in film or on TV], they’re supposed to look like each other. But if you go to the theater, Denzel Washington and Keanu Reeves could be playing brothers…

Meagan: So people are trying, is that what I’m hearing?

Tara: I find a lot of networks are asking us to bring them shows about some cultures and things we haven’t seen yet. They’re looking for the next Insecure or the next Atlanta, whatever that looks like. Beginning to expose these stories and bring them to light.

Tara: And exposure of issues. What’s the next exposé? Where’s that article coming from, where can you option it, buy it, and adapt it.

Zoe: The O.J. [mini series] was so successful.

Meagan: So, with all of that happening, it might surprise you that there’s a new study from Dr. Stacy Smith at USC Annenberg School of Communication and Journalism, showing that after measuring a decade of diversity in Hollywood, there’s only been a tiny bit of improvement for women, people of color, and the LGBTQ community, in terms of actual numbers.

Lindi: Are you talking about people being hired?

Sandy: I’ve seen a real change in the last two years, specifically. I feel there’s been an immense push for casting diversity, and movement towards it. So I have a feeling in the next two years, five years, or 10, we’re gonna be doing better. [For instance] Breakdown Services, which is the premier place for casting, have categories now for male, female, identifies as male, identifies as female, transgender—the latter only came about in the last few months.

Marty: Denzel Washington, Jamie Foxx, and a few black actors have been able to break through on the film side of it, but with the TV stuff, and stuff that’s on Netflix, and Hulu, and Amazon is opening doors. I do think film is not fully representative of the diverse–

Sandy: That’s only if you count films coming out in major theaters, because I cast numerous films that are all African-American. I’ve done films in Chinese. If you go watch the film festivals, there’s been a real shift in what’s playing. At South-by-Southwest [in Austin, TX], the Best Actor in a film last year was African-American. There’s been a shift, but it’s recent.

Zoe: I think if you are a Caucasian actor that’s the hardest area to be in right now, because there’s huge competition.

Meagan: I hear race and gender, but I don’t think anyone’s mentioned disability.  ...
Login to read the full article. SIGN UP HERE FOR YOUR FREE MEMBERSHIP
If you are already a member, welcome back! LOGIN HERE

RespectAbility is a nonprofit, nonpartisan organization that understands we are a stronger community when we live up to our values – when we are welcoming, diverse, moral and respect one another.

We do not lobby; we educate. Our free tools and factual resources inform so people with disabilities can achieve the education, training, jobs, security and good health that everyone needs and deserves.