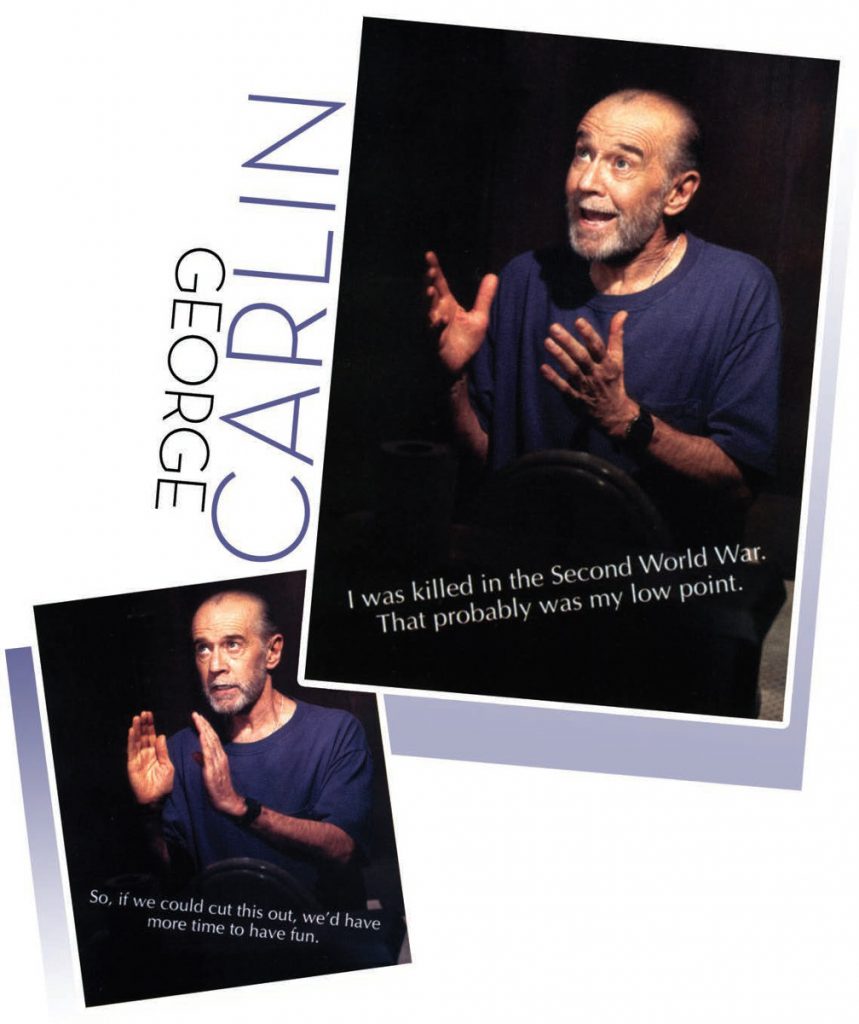 Jane Wollman Rusoff: Tell me, what has psychotherapy done for you?

George Carlin: It’s actually decreased my fortune by half. No, I think I learned quicker, with a little guidance, things I might have learned anyway. Unfortunately, I had to shoot my first two therapists because I thought they knew too much.

JR: What do you do for relaxation?

GC: Sometimes I walk like a horse. Ever do that? It’s not easy. I’m sort of on all fours. Sometimes I rear up, settle down again into a nice lope, then segue into a full canter out on the Avenue. And when I come to a red light, I’ll often throw my rider.

JR: How do you stay so slim?

GC: I have large sections of flesh cut off by a man with a knife twice a week. I find that losing 30 or 40 pounds worth of flesh twice a week keeps me trim, as long as I have enough clothing, and time to heal. Something that began as a funny thought has really deteriorated into a big ball of crap.

JR: Anything you eat that’s unusual?

GC: String. If you get a ball of twine, I don’t mean cheap twine. I mean good twine. A little salsa, a little hot sauce can make it quite delectable. This one is deteriorating, too. I would just cut it right off at the string part.

JR: What’s that chain around your neck?

GC: I bought this in, of all places, the Vatican. In the Sistine Chapel gift shop. I never looked at the ceiling. Let them keep their lousy paintings; I’m looking for nice gifts. It’s a little bull or sheep with ruby eyes, holding a ring in its mouth. And it’s the only thing I wear outside of my wedding ring, because I don’t like jewelry. I don’t like something that is gonna grab on a branch. That’s why I stopped wearing my earring. I had a diamond earring before box boys and bankers wore them. I had one 15 or 20 years ago, when it meant you were really stupid. I stopped wearing it because I realized if I were fleeing the police through the woods, it might catch on a branch, and I’d rather go to jail than have a hole in my ear.

JR: But you do have other nice stuff don’t you?

GC: First of all, this is the whole problem with the world today: private property. If no one owned anything, it would be a lot better. There’s even an entire industry devoted to keeping an eye on other people’s stuff. This is how stupid it’s got. If you decide to get rid of a lot of your stuff, you can give it to a thrift shop or to Goodwill. Then on the way home, you pass a yard sale and what do you do, you look and say, “gee that’s an interesting piece of stuff,” and you buy someone else’s stuff that they wanted so little that they were willing to sell for a dime. And you take it home and begin a new pile of stuff. So, if we could cut this out, we’d have more time to have fun.

JR: What else is wrong with contemporary society?

GC: Religion, corporate life and the permanent government. I think everybody should be able to do anything they want and let roving bands of people punish each other for things they don’t agree with. People with no underwear doing anything they want. Wouldn’t that be fun? You wouldn’t need television.

JR: Do you have a comic answer for this next…

GC: Weren’t any of those other answers comic?

GC: Oh, colon. I think a colon is another thing you shouldn’t fool around about. A man’s colon is his castle, although it may be time-shared, depending on your point of view.

JR: Do you ever go back to the Upper West Side of New York, where you were actually brought up?

GC: I often go back to New York. I usually have myself dropped out of a blimp directly into the old neighborhood to save the trouble of going uptown on the subway. But sometimes I like to lie in the path of an oncoming subway train and say six Our Fathers and six Hail Mary’s. Actually, I usually go to New York to see somebody. That’s a big thing in my life: going to see somebody or going to see somebody else. Other times I just go up to the neighborhood and stand there and cry deeply about my past.

JR: Is it also true that you stopped performing for a while in the 70’s?

GC: No, I never stopped. I always did about 150 shows a year. I wasn’t always present for them, but, I did them…I left a lot of brain cells on the roadside.

JR: You have an odd little sign on your desk: “Mixed Nuts.”

GC: Yeah, I stole that. It was one of the toppings in a frozen yogurt store. I could have taken the “M&M’s” or the “Sprinkles” sign. But I took the “Mixed Nuts” because it applies to my life.

JR: What was the worst time in your life?

GC: When I found myself walking alone in the forest and animals were after me. No, I never had a worst time. Each moment has been better than the last. And if this in any way conflicts with an earlier answer about the ups and downs of life, disregard one of the two answers. I was killed in the Second World War. That probably was my low point.