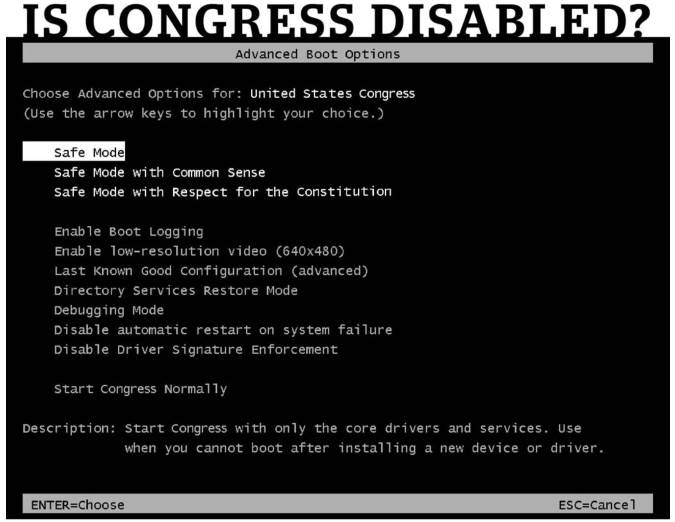 While I was born with cerebral palsy, which is considered a disability under the Americans with Disabilities Act (ADA), I feel blessed that I do not have a more tragic disability-like members of the United States Congress, who recently had trouble finding a way to keep the government running. When I was in the womb, my brain was deprived of oxygen, but the Congressional brain seems to be deprived of common sense and is amped up on a false sense of power, which led to a dysfunctional, 16-day government shutdown, and caused an estimated $24 billion in pain and suffering for hundreds of millions of people.

Is being a member of Congress recognized as a disability under the ADA? Unfortunately no, and the congresspersons themselves don’t even realize how disabling their condition can be. They’re all gainfully employed, own homes, and have far better health insurance than most of us could afford, even with a government subsidy. Unfortunately, this bubble can insulate them from how their conduct impacts those who do not enjoy these securities.

That being said, are there members of Congress who are “less disabled” than others? Of course, but those who continued to perpetuate this ridiculous shutdown definitely have a more severe case of it and should be covered under the ADA. They need to experience unemployment, go without health insurance, have their homes foreclosed upon, and be forced to apply for Social Security Disability Insurance at least three times, so they can see how the other half (three quarters? 99 percent?) lives. If they were forced to squeak by, as millions of people with disabilities do, they might be cured of their arrogance, indifference and unwillingness to acknowledge the consequences of their inaction.

If Congress were a PC computer that shut down, it would have flashed the message:

The US Government was shutdown improperly. Would you like to start again in safe mode (recommended)?

And what would be the ideal “safe mode”? I think it would be that we, the people, need to recognize that it is our country and demand that our elected representatives show respect for the Constitution of the United States. We also need to keep the damn national monuments open. I finally made it down to Little Rock, AR, and couldn’t go in the Clinton Library because those bozos in Congress were asleep at the wheel.