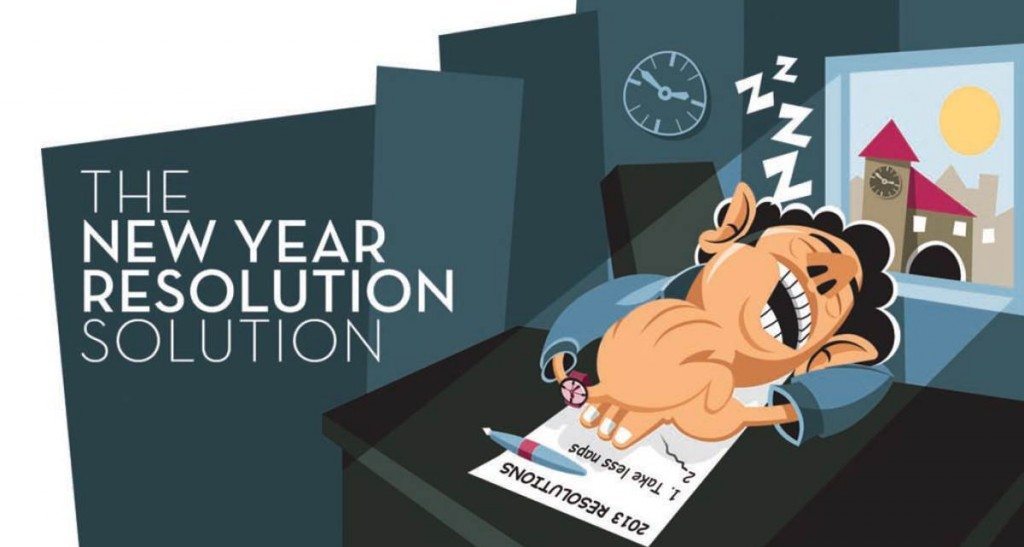 If the world had ended in 2012 as scheduled, we’d all be off the hook from making New Year’s resolutions. But as I’m sure you’ve heard by now, the world kept on turning, and here we are in 2013. If you’re like me, you rang in the year with at least one resolution, possibly more.

Now, we all know this is a mind game: Thinking that by striking a conscious deal with ourselves, we’ll honor it. Unfortunately, there’s usually a flaw in this type of “deal,” mainly because of whom we made the deal with—and because our resolutions are unrealistic and therefore hard to keep.

Bottom line, we want to feel better about ourselves by honoring our commitments—even if they are left over from 2012. So if the goal is to feel better, and have greater self-esteem, then why do we repeatedly make resolutions that, two months later, fall off our radar?

Okay, I imagine there’s a small percentage of people who do follow through on their resolutions, but the rest of us 95 percenters are skofflaws. Remember the definition of insanity: Doing the same thing over and over again, but expecting different results. That makes the vast majority of us as nutty as peanut butter.

So what’s the solution to this annual resolution wipeout? First, we cannot make formal resolutions at all, because that leads to failure. We can only make “fun” resolutions with ourselves, guaranteeing greater successes, creating better self-esteem and enabling us to accomplish bigger things all year long. Fun resolutions act as a bridge between where we are now and where we want to be.

As of this writing, I’ve kept the resolutions I made on New Year’s Eve, and there’s no sign that I’m going to go back on them. One was to be so sweet to an annoying telemarketer that he’d never want to call me again. My opportunity came up a few days ago. I told the guy that I was not interested in his product, but that it was so kind of him to call me. I asked if he’d seen any good movies lately. He was silent. Then I asked him if he had seen Argo. He said no, so I told him what a wonderful film it was-in intimate detail. When he said he had to go, I asked him if he’d seen Lincoln… He said he had, but had to get back to work. I told him how awful it was that he just couldn’t call up and have a nice chat with all the strangers on his list, and by the way did he have any pets. That’s when he hung up. Resolution kept!

Another handy resolution is to give yourself permission to make up a new resolution on the spot—any day, any time—just so long as it’s this year. That way, if you wish to give yourself a new one to try, there’s no guilt residue for not having made it on New Year’s Eve. If you are on Facebook, for instance, you could agree to place a heart on the timeline of at least five of your friends, letting them know that they’re thought of and loved. To create a heart, press < and 3, putting them together will create a heart.

You could offer to volunteer at a senior citizen’s home once a month. Seniors love company, and often have a wealth of wisdom to share. One resolution many of us make is to save money, but a fun one is to give away pennies. Leave a handful in waiting rooms, on sidewalks or park benches. Why? Because then you co-created “pennies from Heaven” for someone.

And last, but not least-read at least one new book a month, and then go online and write a review for the author. To start, consider reading my autobiography, I’m Walking as Straight as I Can—and then writing a review on Amazon and Barnes and Noble.com. Now, don’t you feel better about yourself already?