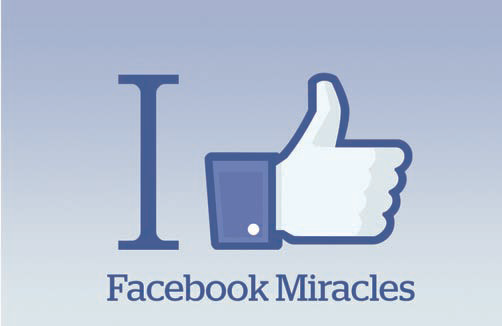 As most of us have learned, there are pros and cons to Facebook (FB). But then again, there are pros and cons to everything under the sun. There are even plusses and minuses to the sun itself. Sure, it gives us warmth, light and Vitamin D, but if we don’t make wise choices that heavenly star can also burn us by causing skin cancer, cataracts and wrinkles. But I’m not writing about the sun today; I’m writing about FB, and a miracle that happened because of it.

Actually, FB has been responsible for several miracles in my life. When I first signed on to the social networking site in 1999, I connected with Ted Nichelson, whom I previously did not know. We became FB friends and, as a result, got together and wrote a book proposal. That in turn launched the publication of my autobiography, I’m Walking as Straight as I Can.

Another FB miracle occurred when I connected with my first cousin, Kelly Jewell-Basile. She and I had never met before, nor did I remember her mother, Phyllis, whom I last saw when I was 6 years old in Buffalo, NY. So when I accepted Kelly’s friend request, I was blessed with a “new” cousin and aunt, and recently drove to Las Vegas to meet them. It was also a great opportunity to surprise my Aunt Phyllis on her 71st birthday. I cannot tell you how much joy and fun I had being a part of her special day!

Las Vegas is a city I know pretty well, as I lived there for six years. It’s also a place with great pros and cons. Nevada has no state income tax; the buffets offer delicious and inexpensive meals; and the entertainment is magnificent. Yet there’s the constant temptation of gambling, scorching heat in summer, and enough desperate energy to drag anyone down.

At the same time, it was from dazzling Las Vegas that my next miraculous FB event occurred. Jay Schwartz—again someone whom I did not know—sent me a private message, telling me that he had a scrapbook of mine, and would like to return it. I told him that I had no recollection of ever owning a scrapbook, but he said that he was sure it belonged to me, and uploaded photos of it as proof. When I saw the images, they jogged my memory.

I was so blown away and overwhelmed when I perused the photos of this long forgotten scrapbook that was stolen from me more than 30 years ago! Tears trickled down my cheeks as I looked at telegrams from Carol Burnett, Dick Clark, Brandon Tartikoff (then-president of NBC) and Johnny Grant (then-honorary mayor of Hollywood).

There was also my first contract from The Facts of Life, and sweet notes, cards and letters from my co-stars on the show: Charlotte Rae and Lisa Whelchel. There was even a letter from Barry Goldwater, several handwritten letters from comedian Bob Nelson; my contract from the film I did with Cheech and Chong (Nice Dreams); and so many other keepsakes from 1979 to 1984.

It was such a miracle to have a treasured scrapbook make its way back to me after 30 some-odd years, especially when you consider that it came from a gentleman who sold celebrity memorabilia to raise money for charity. There are not many people who would have taken the time to locate the rightful owner of such an item.

Jay mentioned that someone had brought the book to his store about 20 years ago, but after he had the opportunity to look through it more carefully, he realized that it was much too personal and decided not to resell it, and instead to return it to me. When he couldn’t find me for several years, he put the book away in a filing cabinet. Recently, he rediscovered it, and decided to search for me on Facebook.

To his surprise, I called him almost immediately and gave him my address so that he could mail my keepsake back to me in Southern California. I told him how moved and grateful I was for his honesty, and how much it means to me to get this treasured item back. Through FB, Jay and I became friends, and the next time I’m in Vegas I look forward to meeting him personally.

There’s no money that can put a value on something as personal as a private scrapbook, which is even sweeter coming back to me at this point in my life. There were many things in that book that completely validated what I had written in my autobiography. There was even a bankbook register from 1981 that shows the most amount of money that I deposited that year was a little over $600.

For Jay, it also validated that by listening to his gut, he did the right thing. When I called him, he admitted to always being a huge fan and said that he never dreamed that he’d be talking to me personally. My call, which cheered him, couldn’t have been timelier, as he just lost his mother the week before, on July 4, and felt devastated.

I responded that I had lost my own mom on July 3 back in 1993, and suggested that perhaps our mothers had connected on the other side, and conspired to connect Jay and me. I think that gave him much-needed comfort that everything happens for a reason, and affirms the fact that we cannot ever lose our faith that miracles do happen—even through the sometimes controversial tool of social media.