On this year’s recent International Day of Disability, there was an extra effort to get out the vote to ratify the Convention on the Rights of Persons with Disabilities in the US Senate to protect the 160 million young people around the world who live with disabilities.  It brought attention to the fact that, both at home and abroad, youths with disabilities are denied liberties, bullied and too often abused, said Victor Pineda, PhD, a Senior Research Fellow at the World Institute on Disability.

He noted that he himself was one of those treated as an outsider after muscle loss caused him to begin using a wheelchair and relying on a breathing apparatus around 5 years old.

“Throughout my childhood, I had to change people’s ideas of what I could do and how I could do it.  Eventually, I found out that there are laws that protect me,” he said, and then added:   “I grew up wondering what my life would have been like had I lived in some place that did not protect the rights of children like me.  I discovered that people like me from all over the world were meeting at the United Nations to work on these issues, and I worked hard to join them.”

Recently, as the vote to ratify the treaty approached, he invited everyone to contact key Republican senators via twitter and phone to get the votes still needed to help “America, the strongest country in the world, do more to eliminate unnecessary barriers to individual freedoms,” he said.

Unfortunately it was not enough to get the job done, which disappointed tens of millions of people, including Senator Tom Harkin (D-IA), chairman of the Senate Committee on Health, Education, Labor and Pensions, and co-author of the Americans with Disabilities Act.

The recent vote against ratifying the United Nations Convention on the Rights of Persons with Disabilities “is terribly disappointing to me, and to disability advocates around the country,” Harkin noted, adding: “The arguments made against ratifying the CRPD were misinformed and damaging, and a minority of Senators blocked important progress on human rights based on fictitious rationale. This treaty would not have undermined America’s sovereignty or turned over too much power to the United Nations; it would have reaffirmed America’s rightful place as the world leader in rights for people with disabilities.”

Harkin asserted that since the passage of the ADA in 1990, the US has led the way in integrating people with disabilities into every aspect of American society, and “this failure to live up to that mantle marks a shameful day in our history. Disability advocates will not give up this fight, and neither will I.”

The veteran congressman suggested that the Senate missed an opportunity to “enshrine American standards that have been developed through decades of bipartisan cooperation. Ratification would require no changes to US law, as the United States already leads the world in promoting and protecting the rights of persons with disabilities. However, it would position the United States to support extending across the globe the rights that Americans already enjoy at home.”

The treaty would have improved the lives of Americans with disabilities, Harkin said, including wounded service members, who want to live, work and travel abroad. It would also have allowed our businesses to operate on a more level playing field and reaffirm American leadership on disability rights.

“For these reasons, and others, Democrats and Republicans in the Senate and across the country—as well as disability advocacy groups, wounded warriors, veterans groups and business groups—have supported this treaty,” Harkin continued, and adding, “We commend former Senator Dole and the bipartisan coalition of Senators who worked to secure the treaty resolution’s passage. As President Obama declared in a written statement read in tribute to Senator Dole just before the vote, “disability rights should not stop at our nation’s shores.” 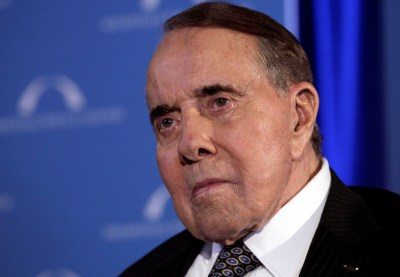 Following the failed voted for US ratification of the Convention on the Rights of Persons with Disabilities (CRPD), the United States International Council on Disabilities (USICD) and the Disability Rights Education and Defense Fund (DREDF) are using adjectives like “appalled, disgusted, disappointed and embarrassing” in denouncing the result of this vote.  The USICD said that messages are pouring into their office from “disability leaders and advocates around the world in disbelief that the United States, the leader on disability rights, would reject the CRPD.”

USICD, DREDF and the campaign for ratification of the CRPD are asking Americans to thank the eight Republican senators and Sen. Bob Dole who stood up for disability rights.

Ratification failed by only five votes.  These five Republican senators, longtime friends and colleagues of Sen. Bob Dole who himself was on the Senate floor urging them to do the right thing, voted no.

These seven Republican senators should have supported CRPD, according to the USICD, including Sen. Moran who was a lead sponsor for the treaty.

Senators Enzi, Blunt, Portman and others claim to be strong on disability issues.  They all voted no.

The USICD asks that the public contact these eight Republican senators: Ayotte, Barrasso, Brown, Collins, Lugar, McCain, Murkowski, Snowe, at Senate.gov They also ask that the public send thank you letters to Sen. Bob Dole for his tireless advocacy: egrant@usicd.org