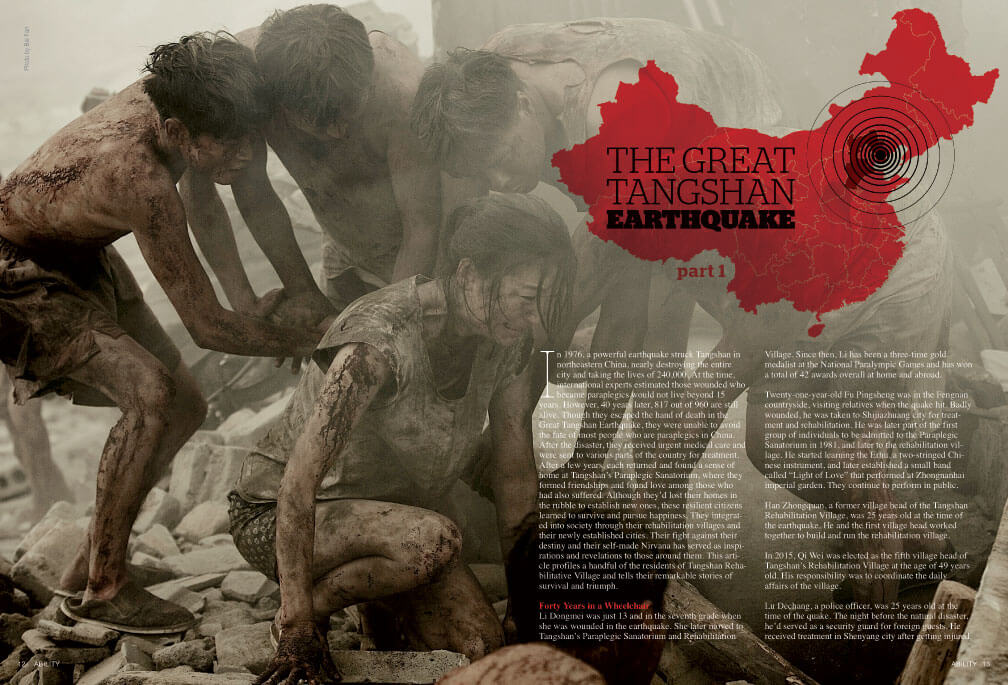 In 1976, a powerful earthquake struck Tangshan in northeastern China, nearly destroying the entire city and taking the lives of 240,000. At the time, international experts estimated those wounded who became paraplegics would not live beyond 15 years. However, 40 years later, 817 out of 960 are still alive. Though they escaped the hand of death in the Great Tangshan Earthquake, they were unable to avoid the fate of most people who are paraplegics in China. After the disaster, they received urgent medical care and were sent to various parts of the country for treatment. After a few years, each returned and found a sense of home at Tangshan’s Paraplegic Sanatorium, where they formed friendships and found love among those who had also suffered. Although they’d lost their homes in the rubble to establish new ones, these resilient citizens learned to survive and pursue happiness. They integrated into society through their rehabilitation villages and their newly established cities. Their fight against their destiny and their self-made Nirvana has served as inspirations and revelations to those around them. This article profiles a handful of the residents of Tangshan Rehabilitative Village and tells their remarkable stories of survival and triumph.

Forty Years in a Wheelchair

Li Dongmei was just 13 and in the seventh grade when she was wounded in the earthquake. She later moved to Tangshan’s Paraplegic Sanatorium and Rehabilitation

Village. Since then, Li has been a three-time gold medalist at the National Paralympic Games and has won a total of 42 awards overall at home and abroad.

Twenty-one-year-old Fu Pingsheng was in the Fengnan countryside, visiting relatives when the quake hit. Badly wounded, he was taken to Shijiazhuang city for treatment and rehabilitation. He was later part of the first group of individuals to be admitted to the Paraplegic Sanatorium in 1981, and later to the rehabilitation village. He started learning the Erhu, a two-stringed Chinese instrument, and later established a small band called “Light of Love” that performed at Zhongnanhai imperial garden. They continue to perform in public.

Han Zhongquan, a former village head of the Tangshan Rehabilitation Village, was 25 years old at the time of the earthquake. He and the first village head worked together to build and run the rehabilitation village.

In 2015, Qi Wei was elected as the fifth village head of Tangshan’s Rehabilitation Village at the age of 49 years old. His responsibility was to coordinate the daily affairs of the village.

Lu Dechang, a police officer, was 25 years old at the time of the quake. The night before the natural disaster, he’d served as a security guard for foreign guests. He received treatment in Shenyang city after getting injured.

Artist Yao Cuiqin was 22 years old at the time of the earthquake. The army’s arts soldiers transferred careers, so she switched to banking. In the 1980s, she returned to the arts and performed on stage while also launching literary works such as “Focus on the Bamboo, Listen to the Rain” and “Plum Blossom Snow Shower.” She has been known as the Zhang Haidi of Tangshan, a Chinese writer and motivational speaker.

The Night He Escaped Death

The humidity made it difficult to fall asleep. In the late hours of the night, I imagined the western sky was still burning crimson. This is the deepest collective memory of the survivors of the Tangshan earthquake on July 28, 1976. Some witnessed a dense swarm of dragonflies turn black, others noticed the unusual water level, but what Fu Pingsheng remembered was the extraordinary fog that day. It enveloped the entire city. Before going to sleep that night, he heard the sound of rolling thunder from far off.

For a long time, people had talked about possible earthquakes. A lot of ordinary Tangshan families used indigenous methods such as turning a liquor bottle upside down as an early warning mechanism. But as time passed, people became less vigilant.

At the time of the earthquake, 21-year-old Fu Pingsheng was a school graduate in the Fengnan group near Tangshan. He went home to visit relatives that day. He did not find out until after the disaster that the graduate house had collapsed during the quake. The earthquake hit at 3:42 am, while most of Tangshan’s residents slept. The vast majority of people were unprepared. The strength and power of the earthquake was equal to the size of 400 atomic bombs in Hiroshima; it tore apart the ground beneath Tangshan. The violent shaking caused houses to collapse in just moments. Heavy bricks from rooftops fell on Fu Pingsheng’s back. 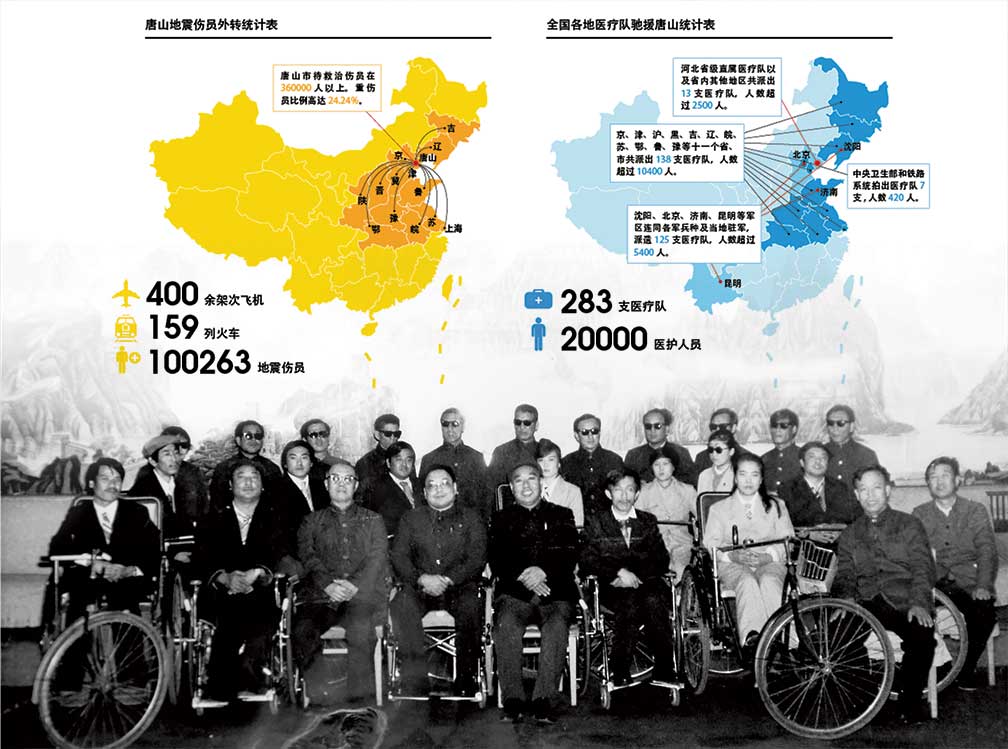 His older brother climbed out of the ruins and searched for him. Fu Pingsheng could hear his brother calling his name. He responded as best as he could, but found he could not respond any further because he could not find his legs. “In reality,” he says, “my legs were still attached to my body, but I couldn’t feel them.” After being pulled out, he was laid on a door plank. He lost control of all bodily functions. “I was not comatose, I was conscious, and I was not hit in the head. The injury was all in my waist, but nobody realized the nerves were damaged. I simply could not worry about it.” When recollecting this experience, he often repeated this sentence.

He lay in bed for four days, and his dad sat beside him. “I wanted to turn and look, but sadly, I couldn’t even move. I’m unable to even express the heartache of that period,” he explains.

Thirteen-year-old Li Dongmei lived in a one-story bungalow built by the department of public housing. That night, she stumbled into bed after completing her homework. After being shaken awake by the early morning quake, the former savvy gymnast jumped from the bed to the floor. “I would not exist today if I had not jumped down,” she says.

But the moment she ran to the door, the doorframe and four heavy, prefabricated slabs came crashing down. Everything in front of her went black, and she lost consciousness. It seemed that a voice told her to, “go to sleep, go to sleep,” but the sound of footsteps and shouting from the outside pulled her back to reality. She yelled for help. It was her father and her father’s colleague who pulled her out from under the rubble.

“If it were not for the support of the door frame, I would have been trapped inside,” she says. But she still suffered multiple thoracic and lumbar spine fractures. When she was carried out, the skin on her forehead had all peeled off and her eyes were droopy. These scars are still visible today.

She was placed in a tent and fell in and out of consciousness. When she awoke, she was so thirsty that her throat felt like it was burning up. Beside her she recalled hearing one nurse tell another nurse, “This kid will not survive much longer.” The other nurse said, “Give her some water. She will be able to survive,”

Before rescue crews arrived from other areas, people started digging through the rubble with their bare hands; death and hopelessness permeated the air. Heavy rain and aftershocks continued to pummel the devastated city. When there were not enough tents to go around, many of the wounded that were unable to move were placed under tables to be shielded from the rain.

According to reporter Chai Jing’s written records, the survivor Yao Cuiqin also became a paraplegic due to the earthquake. Her experiences were similar: She lay on the floor as it rained outside. She was extremely thirsty, so she opened her mouth to have the rainwater quench her thirst, and then her hand brushed across her numb legs. She thought she was dead and kept moving her hand up to feel her legs. What she felt, instead, was her body. Her legs were broken. To the people of Tangshan, this became known as a “1/3 dead, 1/3 injured, and 1/3 alive” catastrophe. It left 3,817 survivors paraplegics.

Rescue Efforts On The Way

The earthquake turned the railroad tracks into fried dough twists. On July 30th of that year, the new Chinese People’s Liberation Army soldiers finally pushed through the traffic and entered the city. The large number of medical personnel from the other areas also rushed in. Tens of thousands of injured individuals were waiting for treatment of paralysis, fractures and extrusion injuries. Due to the hot, damp weather, maggots started growing in the wounds of those who were unable to receive treatment. Shanghai’s medical rescue team delivered ten thousand pain relievers and a thousand catheters. Everything was used up in one night.

On the fifth day after the earthquake, Fu Pingsheng’s long awaited helicopter finally arrived. ...
Login to read the full article. SIGN UP HERE FOR YOUR FREE MEMBERSHIP
If you are already a member, welcome back! LOGIN HERE

by Qu Hui and Bai Fan