Grinding to the American Dream 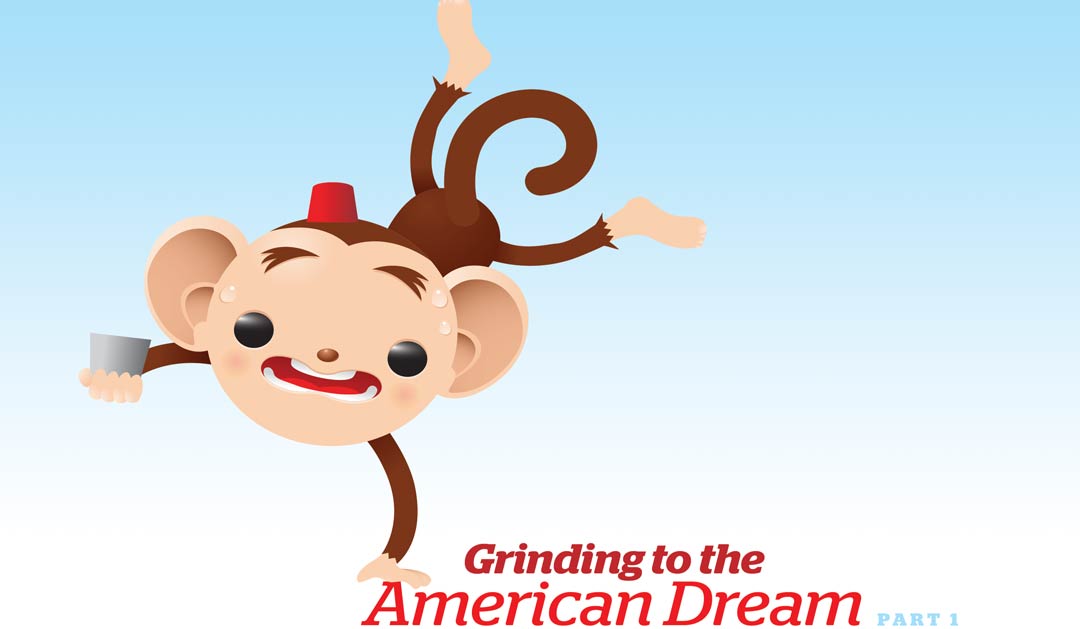 The passenger ship pulled into Ellis Island on a hot summer day. The newly arrived Italian immigrants poured off the ship with hopes of finding a better life. Among them was Ugolini, an older man in his sixties, who was short with well-toned, aged muscles that were covered by bushels of curly hair. He walked with a slight limp as a result of slipping on a banana peel on his kitchen floor. The hunched man carried a ragged leather suitcase in one hand and the paw of a chimpanzee, who wore a tiny red bell hop cap, in the other, as they strolled towards the check-in station to begin a new life.

For the last twelve years, Ugolini had scraped out a meager living by traveling the southern cities of Italy, churning a hand-cranked organ and singing operatic songs in a scratchy, off-key baritone voice. Eventually, he acquired a perky monkey to dart around with a tin cup and collect coins from amused on-lookers, while he concentrated on getting his song lyrics right. The monkey’s name was “Chimps,” and he was rescued from a traveling circus that mistreated their animals (Chimps was required to perform six shows a day as a trapeze act while dressed in a puffy tutu with a few drunk clowns). The name “Chimps” was a misnomer; Chimps was not a chimpanzee, but a larger than normal chubby spider monkey.

In the old country, times were lean. Ugolini would often grapple with his monkey sidekick over a stale roll that a deli owner would supply for free, if Ugolini promised to play his barrel organ on the next block down. Ugolini made the decision to try his luck in America, the land that promised wealth and riches to anyone willing to work hard.

Ugolini’s sister, Rosa, had moved to America seven years earlier and had found residence in Little Italy, on Mulberry Street, in Manhattan, New York. She bore a strong resemblance to her brother, except that his moustache was a tad more bushy. She was well known in the neighborhood for her uncanny ability to give spot-on fortunes by reading the lumps off various vegetables that her clients would set in front of her. Zucchini readings were her bread and butter, and her predictions were spot on. She once warned a woman of an impending horse cart accident just by feeling the bumps on the elongated, tubular green plant. Sadly, the client was a skeptic, refusing to believe anything about the black arts. Coincidentally, the following day said client was trampled by a team of spooked horses pulling a vegetable cart. After that, the lady went on a strict meat diet.

Rosa was excited to see her brother and get the news from the old country. The two united with hugs and kisses outside of Ellis Island, while the monkey scampered in circles, stretching his legs out from the long cruise.

“He’s a noa good. Whena you gonna getta a reala joba likea streeta cleaner, huh?” the sister clamored. “You’ra back is stronga enougha to a lifta the horsea pooh piles.”

Ugolini settled into his sister’s small, two room, apartment and quickly learned his way around. It was a bustling neighborhood – a prime area to make some money. A man-monkey musical team usually operated on downtown streets. The organ grinder would set up on a street corner, wearing his instrument on a strap over his shoulder, and then support its weight with a stick while he played. Meanwhile, the monkey, tethered to a leash, would scamper around with a tin cup, collecting change. Audiences were dependable, and enjoyed the herdy gerdy songs like: “Dixie and “Funiculi, Funicula.” Sometimes the monkey would tumble, flip, or do a playful jig to the amused people. Then, he’d stick his tin cup in front of their faces, coaxing the dupes out of spare change. Chimps had the routine down pat. After ten to twelve hours on the street, the pair would arrive back home and dump the loot on the bed to count their day’s wages. On a good day, they could make up to three dollars, but that was a rarity.

The old street performer would pour the coins into a cigar box that he had found in a back alley outside a seedy brothel. Deep down, it bothered him that the prostitutes could smoke better cigars than he could afford, but he was at least grateful that he didn’t have syphilis. Chimps watched Ugolini stuff the box under the cheap bed mattress. It would be nice to have some of that loot to make him feel important, he thought.

“Nowa youa getta to beda, sleepy head,” Ugolini said as he shoved the monkey under the covers. Then he took off the little pet’s hat and patted him on the head, “I don’ta wanta youa alla grouchy tomorrow ina fronta alla the paying customers.”

Ugolini began to walk out of the room then spun around to catch the monkey flipping him off with his stubby middle finger. “A littlea wisea guy, huh?” he huffed. The old man flew off the handle and grabbed the little runt from under the covers and put him over his knee and began swatting its behind, hoping to teach him some respect. Ugolini was never proud after he whacked the monkey’s bum, but it had to be done to ensure discipline and it happened all too often. The neighbors knew it too. Every night, they could hear old Ugolini spanking the monkey.

Ugolini sat at the kitchen table staring at an almost empty bottle of wine. “Whatta are youa looking at?” he slurred at the red vino. Since he arrived, he had put in long days on the street and money was barely trickling in. He was disillusioned that he hadn’t yet achieved the American dream. They were just scraping by. Every day was the same, grinding his organ while the monkey got all the attention. Sometimes, the little beast would scamper off for hours leaving Ugolini to track him down, only to find him flirting with giddy dames enamored with his monkey tricks. Time was money and he wasn’t making any when his furry partner wasn’t waving that tin cup.

One day, while out pedaling, Ugolini’s eyes fell upon a shy apple peddler. Her name was Becky and she was beautiful in her own homely way. It was love at first sight. Ugolini stood there frozen, contemplating how to approach the vision of beauty. Suddenly, she looked up and with a big smile she beamed, “You are soooo cute.”

Ugolini, playing coy, bashfully bowed his head as he nervously circled his foot in the dirt. The excited girl raced towards him. He perked up and smiled. She ran up to him, then right past him, and picked up the monkey who was standing behind him. As she twirled the furry mammal around, the monkey stared at the old man while sporting a devious smirk. To add some fuel to the fire, the monkey winked as he snickered. Ugolini’s face turned as red as Roma tomato, as he boiled in anger. ...
Login to read the full article. SIGN UP HERE FOR YOUR FREE MEMBERSHIP
If you are already a member, welcome back! LOGIN HERE