Grinding to the American Dream Part 2 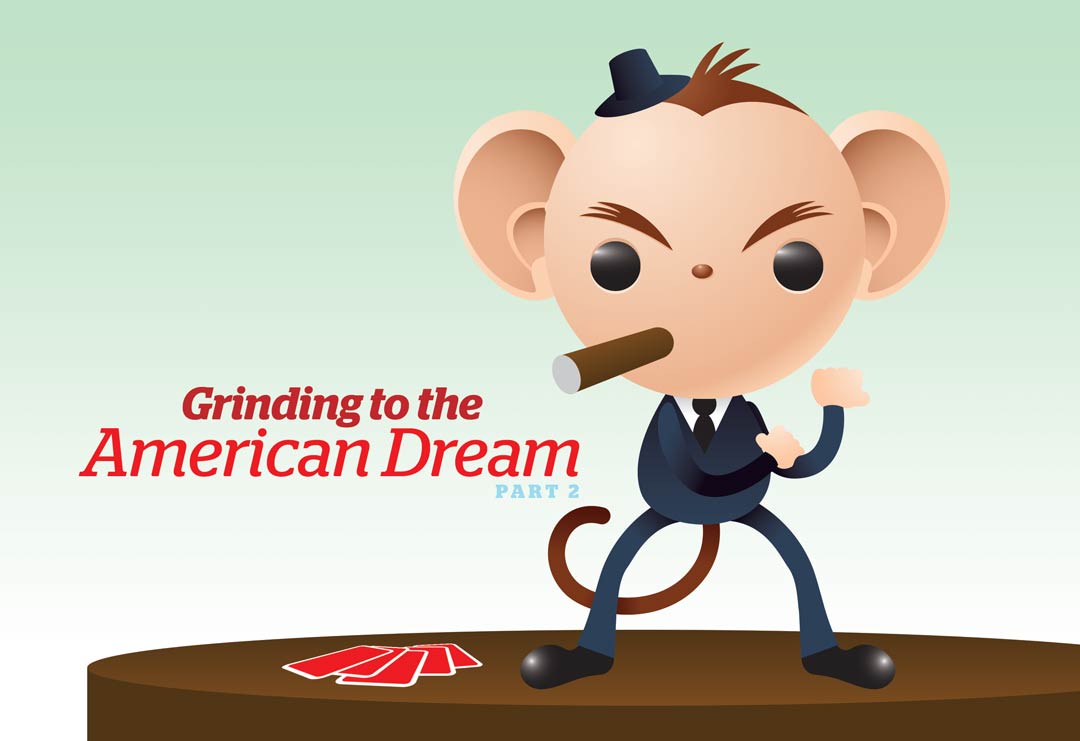 Ugolini had used his savings to buy a shoe shinning kit. He set up his station on the corner of Seventh and Main. People would recognize him and ask where his cute little monkey was. He would always respond, “Whatta monkey? I never knowa a monkey.”

One day, Becky stopped by to check on Ugolini. She was concerned about his mental health now that he was on his own. She handed him an apple. His heart rang with joy as he gently fondled it for a long, awkward, minute as salvia gathered on the corner of his mouth. He was just happy to have something that she had touched. He smiled and then took several bites of the apple, as if it were a piece of her heart that she had given.

“Oh,” she surprisingly said. “I was just hoping you would polish my apple so I could put it on the shelf and eat it for breakfast.”

Ugolini slowly stopped chewing then handed the half-eaten fruit back to her. “I brung ya something else,” Becky shyly said. She pulled out a little doll she had made and handed it to Ugolini.

“I like to make dolls in my spare time,” she proudly stated. “Maybe it’ll bring ya luck.”

It looked so real. The man gently fondled it for a long awkward minute as salvia gathered on the corner of his mouth. Again, he was just happy to have something that she had touched. “Heys, yousa wanna takea a stroll?” he asked, hopefully. The shoe shiner shut down shop early that day so he could spend the afternoon in the park with Becky. They walked together while she talked and he laughed. After an hour or so, she finally asked him why he was laughing. He really had no answer so he began to converse with her.

While they were on the bench enjoying a hot dog, they looked up to find the monkey walking towards them. He was wearing tailored pin-striped suit and smoking a cigar fatter than the hot dogs that Becky and Ugolini were nibbling on. Two chubby thugs flanked the furry animal on both sides as they strutted in sync. Coincidentally, they were just as fury as the monkey. Soon, they hovered over the couple.

The monkey just smirked and blew several cigar smoke rings in the air. The cocky beast snapped his finger paw and one of the thugs handed him a hundred dollar bill. The monkey strolled over to Ugolini and tucked the C note into his front, wrinkled, shirt pocket and then tapped him on the cheek, as if to say, “Go get yourself something nice to wear.”

Ugolini jumped up and pulled out the hundred-dollar bill from his pocket, threw it down on the floor, and spit on it. The monkey went crazy, circling and shrieking, taking the disrespectful action as an affront to his “manhood”. He yanked off his suit coat and hunch over with his paws in front of him, ready to pounce.

“You wanna takea a shot at old Ugolini again?” he snarled as he stood up, snarling. “Come on, Mister Biga Shot. I’ma gonna takea you down oncea anda for alla.”

Ugolini wasn’t playing games. He swung his arm and knocked the cigar out of the monkey’s mouth. The angry animal screeched, and then charged at his former owner, knocking him over the bench. The old Italian threw the monkey off and then leaped to his feet like a spry Coon cat. He shuffled his feet and waved his fist cursing the short baboon.

He was just about to do the Linguini body slam on the little pest, a move he had learned on the streets of Genovese as a teenage boy during scraps after a neighborhood Bocce Ball loss, but before he could pounce, he was grabbed by primate’s thugs. ...
Login to read the full article. SIGN UP HERE FOR YOUR FREE MEMBERSHIP
If you are already a member, welcome back! LOGIN HERE