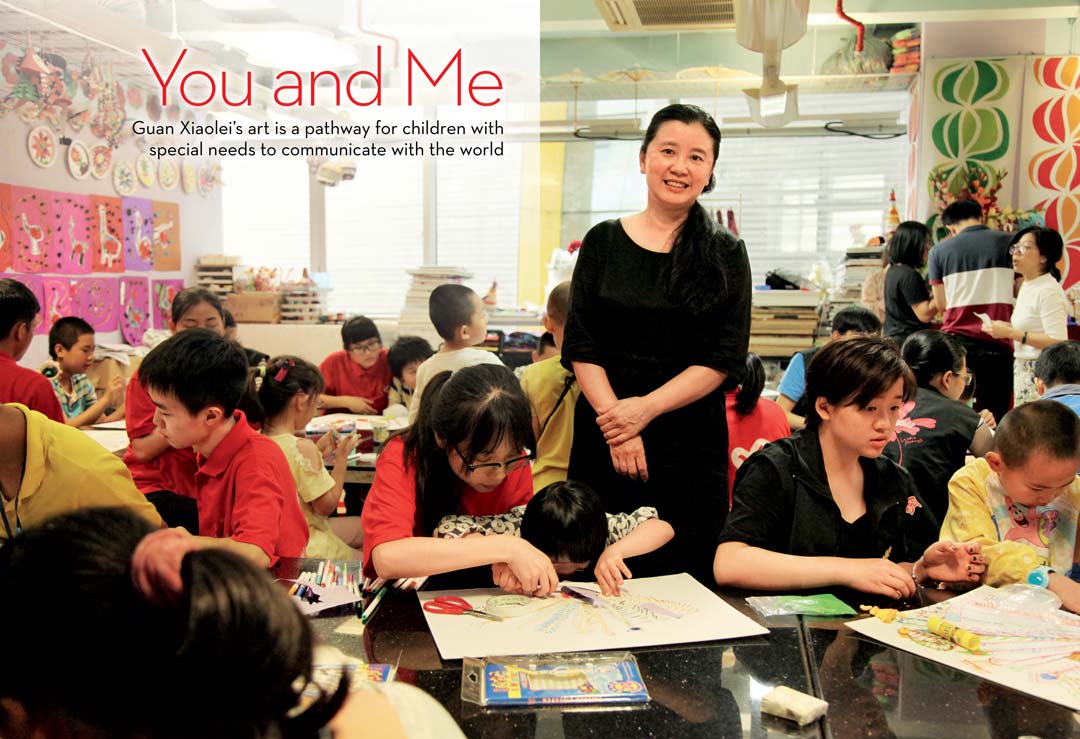 Although many people come and go from the Guangzhou Youth Club on weekends, there is something catching everyone’s attention: a very special exhibition. At the end of one its corridors, hangs a collection of vivid paintings showcased against a backdrop of Time magazine covers.

Each canvas exudes unfettered creativity. When sunlight lands on the paintings, various shades of red, orange, yellow, green, blue and indigo appear radiant. Called “You and Me: We are the Generation that Represents the Present,” the collection of paintings are by young artists who happen to be children with special needs. Visitors stop and stare, deeply moved by this quiet ensemble of work.

In the eyes of many, these youngsters may seem out of tune with the outside world, but in the eyes of their teacher and mentor Guan Xiaolei, they are true artists. Although they may not necessarily be good with words, their hearts are filled with color and a vibrancy that is seamlessly expressed in their brilliant paintings.

The Priceless Benefits of Art

Every Tuesday through Friday, dozens of art students stream into Guangzhou Youth Club’s large art studio. Classes are lively as students express themselves and their creativity in a straightforward fashion. They are expressive, for when they draw they smile; some even dance as they wield a pencil or brush. The teachers, all graduates from fine art universities, never teach techniques, but rather guide the children to do whatever they want with their canvases. They’re there for support only.

You won’t see parents waiting outside for their children either, for many of the students like their independence. They prefer to take the subway on their own to and from school. Although Guan Xiaolei admits not all children with intellectual disabilities are necessarily artists, she is grateful for the many benefits art brings into their lives. “Art is a language,” she says. “It communicates the artist’s unspeakable inner world and has an art therapy effect.”

In the beginning, the students wouldn’t always paint or even sit still. When Wei Yizhe, who has autism, first arrived a few years ago, he picked up the paint and squirted it into his mouth; he cried during every class. To help him adapt, his mother accompanied him the first year and insisted he continue painting. Today he no longer cries and loves art, especially painting. He thinks it’s fun and sometimes paints for hours. It is a miracle, considering he could barely stand still for two minutes when he first arrived. Previously, few people believed children with special needs could draw or paint.

An Art Teacher Finds Her Calling

In 1984, Guan Xiaolei graduated from Guangzhou Academy of Fine Arts and became an art teacher at the youth club. That year, an eight-year-old boy named Chen Yuan Pu also came to the youth club to study painting. The little boy was thin, naggy and silly, but also cute, and he left a deep impression on the young teacher. Later, she learned that Yuan Pu was a child with special needs.

At that time, the youth club didn’t have many spots open and students had to pass an entrance exam. Yuan Pu took the test multiple times, but always failed to pass—he tested a zero on math, and his paintings simply did not follow the given topic. But Guan Xiaolei found Yuan Pu to have a striking talent for painting. He is imaginative, with a strong spatial ability that enables him to draw three dimensional scenes. His artwork pulls the viewer into a fantasy world. In this way, when the youth club began implementing proper and elite education, Yuan Pu became one of Guan Xiaolei’s first “special” students, but also the first in the history of the youth club to be accepted as a child with special needs.

To allow Yuan Pu to develop his natural aptitudes and not be bound by traditional teaching methods, Guan Xiaolei never gave him too many restrictions, nor interfered much. In this way, the boy, who had one lesson per week, was happy to paint and always eager to do more.

At age 21, Yuan Pu, with the youth club and Guan Xiaolei’s help, published his own art album called No Sound But Happiness, a title borrowed from Liao Bingxiong, a famous painter. After that, Yuan Pu became the club’s first art teacher with special needs.

Yuan Pu’s experience inspired Guan Xiaolei, who thought, “If these children were given more space and encouragement, they would have a different life.” In 1998, along with the children’s juvenile art school vice president, the teacher set up China’s first experimental art class for children with special needs. That year, 20 children, ages five to 13, some with cerebral palsy, autism, Down syndrome and other conditions were recruited to participate. The popularity of the class surpassed everyone’s imagination, for parents would line up outside overnight to secure a spot for their child.

By 2006, the special education classes were upgraded and became known as the Special Children’s Education Center. In addition to the original art classes taught, they added courses in music, drama, dance, comprehensive art, art therapy and physical development. In 2010, the City Welfare Lottery Chest subsidy decided to give out more that 2000 free scholarships and spaces annually to children with special needs.

The Biggest Hurdle? No Examples.

The youth club currently offers more than 60 arts education courses for children with special needs as well as for children who are hospitalized, orphaned or economically disadvantaged. But there remains another difficult issue: the community tends not to understand people with disabilities, so they do not accept them as welcomed members of society.

So to promote greater social awareness, Guan Xiaolei and her partners focused increasingly on ...
Login to read the full article. SIGN UP HERE FOR YOUR FREE MEMBERSHIP
If you are already a member, welcome back! LOGIN HERE