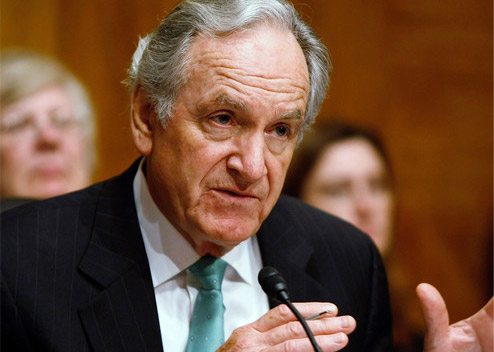 U.S. Senator Tom Harkin (D-IA), Chairman of the Senate Health, Education, Labor, and Pensions Committee, released the following statement on the 23rd anniversary of the signing of the Americans with Disabilities Act. Harkin was the Senate sponsor of the ADA and delivered the first-ever Senate floor speech in American Sign Language upon Senate passage of the law. Harkin recorded a video greeting to commemorate the anniversary of this landmark civil rights law.

“Working on the passage of the Americans with Disabilities Act, I heard stories of individuals who had to crawl on their hands and knees to go up a flight of stairs or to gain access to their local swimming pool. There were individuals who could not ride on a bus because there wasn’t a lift or attend concerts or ballgames because there was no accessible seating. Prior to the passage of the ADA, in many communities, people with disabilities could not even cross the street in their wheelchairs because there were no curb cuts. Millions of Americans were denied access to their own communities—and to the American dream. The enactment of the ADA sent a resounding message that our nation would no longer tolerate isolation, segregation, and second-class citizenship for people with disabilities.

We have made tremendous progress as a country since the passage of the ADA, but make no mistake—there remains more work to be done. We must honor the anniversary of the ADA by redoubling our efforts to give people with disabilities who remain in institutions a chance to experience the same dignity and freedom as every other citizen, by improving opportunities for people with disabilities to live in their homes and communities. The Senate should also ratify the Convention on the Rights of People with Disabilities—to solidify our status as a global leader on disabilities rights—and so that our country can have a seat at the table on disability rights issues around the world.”