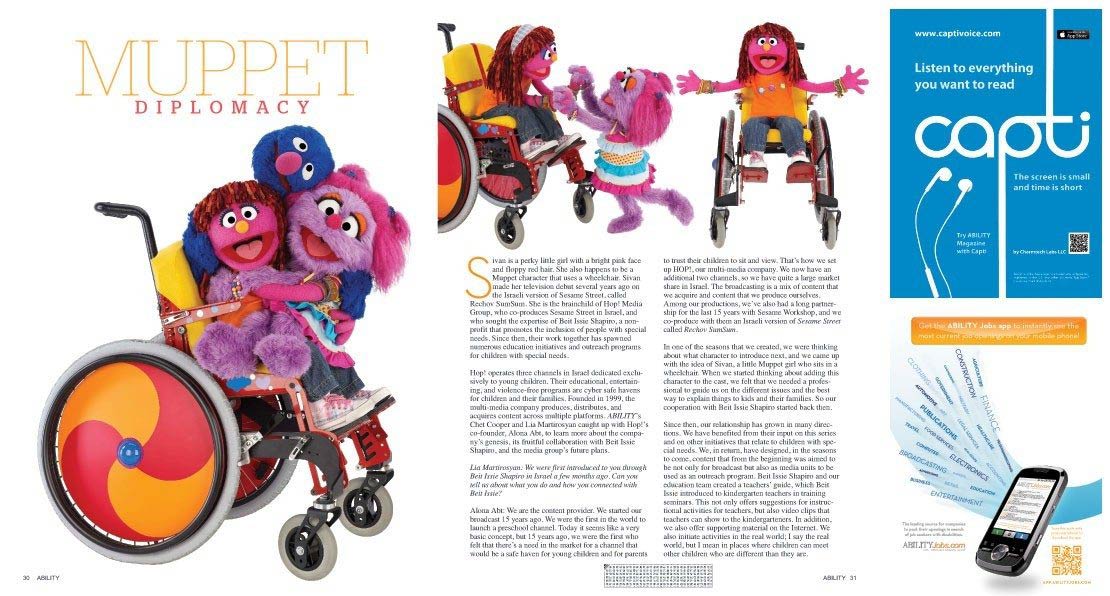 Sivan is a perky little girl with a bright pink face and floppy red hair. She also happens to be a Muppet character that uses a wheelchair. Sivan made her television debut several years ago on the Israeli version of Sesame Street, called Rechov SumSum. She is the brainchild of Hop! Media Group, who co-produces Sesame Street in Israel, and who sought the expertise of Beit Issie Shapiro, a non-profit that promotes the inclusion of people with special needs. Since then, their work together has spawned numerous education initiatives and outreach programs for children with special needs.

Hop! operates three channels in Israel dedicated exclusively to young children. Their educational, entertaining, and violence-free programs are cyber safe havens for children and their families. Founded in 1999, the multi-media company produces, distributes, and acquires content across multiple platforms. ABILITY’s Chet Cooper and Lia Martirosyan caught up with Hop!’s co-founder, Alona Abt, to learn more about the company’s genesis, its fruitful collaboration with Beit Issie Shapiro, and the media group’s future plans.

Lia Martirosyan: We were first introduced to you through Beit Issie Shapiro in Israel a few months ago. Can you tell us about what you do and how you connected with Beit Issie?

Alona Abt: We are the content provider. We started our broadcast 15 years ago. We were the first in the world to launch a preschool channel. Today it seems like a very basic concept, but 15 years ago, we were the first who felt that there’s a need in the market for a channel that would be a safe haven for young children and for parents to trust their children to sit and view. That’s how we set up HOP!, our multi-media company. We now have an additional two channels, so we have quite a large market share in Israel. The broadcasting is a mix of content that we acquire and content that we produce ourselves. Among our productions, we’ve also had a long partnership for the last 15 years with Sesame Workshop, and we co-produce with them an Israeli version of Sesame Street called Rechov SumSum.

In one of the seasons that we created, we were thinking about what character to introduce next, and we came up with the idea of Sivan, a little Muppet girl who sits in a wheelchair. When we started thinking about adding this character to the cast, we felt that we needed a professional to guide us on the different issues and the best way to explain things to kids and their families. So our cooperation with Beit Issie Shapiro started back then.

Since then, our relationship has grown in many directions. We have benefited from their input on this series and on other initiatives that relate to children with special needs. We, in return, have designed, in the seasons to come, content that from the beginning was aimed to be not only for broadcast but also as media units to be used as an outreach program. Beit Issie Shapiro and our education team created a teachers’ guide, which Beit Issie introduced to kindergarten teachers in training seminars. This not only offers suggestions for instructional activities for teachers, but also video clips that teachers can show to the kindergarteners. In addition, we also offer supporting material on the Internet. We also initiate activities in the real world; I say the real world, but I mean in places where children can meet other children who are different than they are.

Beit Issie has a wonderful initiative called the Friends Park in Ra’anana called Park Chaverim. It’s a park that has games for children with special needs. It’s built in such a way that a child who is blind or who doesn’t hear well or who needs to move around in a wheelchair can participate. The concept of the park is to bring together children with and without special needs so they can become friends.

We branded the park with our characters using the connection that we had already created in the public with Sivan. That’s just one of the highlights that we’ve done together. It’s been a very good partnership for us. We are media people. We’re not educators. But we do aspire to use media in a way that benefits children’s lives and their families. Whenever we meet a group of professionals with a big heart like the staff of Beit Issie Shapiro, we can benefit from their know-how, experience and continual interest in expanding their influence. It’s very stimulating for us.

Lia: That’s wonderful. ...
Login to read the full article. SIGN UP HERE FOR YOUR FREE MEMBERSHIP
If you are already a member, welcome back! LOGIN HERE