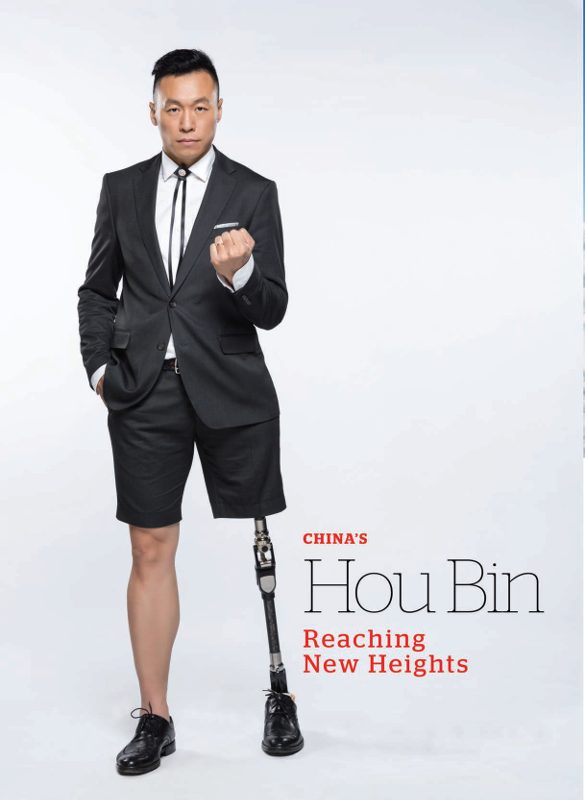 Born in 1975 in the city of Jiamusi in the province of Heilongjiang, China, Hou Bin lost his left leg in a devastating train accident when he was just nine years old. Today, at 40, he is a motivational speaker, a three-time Paralympic champion in the high jump, a former ambassador for Beijing’s bid for the Winter Olympics, and the last one to carry the Olympic torch in the 2008 Beijing Paralympic Games. Add to this impressive resume adventure seeker, for he’s also explored the Arctic, swam in the icy waters off Antarctica, and engaged in extreme endurance footraces across Mongolia’s Gobi Desert.

Hou Bin is undoubtedly China’s most dazzling and influential athlete with a disability. When he lit the cauldron during the opening ceremonies of the 2008 Beijing Paralympics, he was not, in that dramatic moment, just Hou Bin, but a powerful symbol of China’s social progress on behalf of people with disabilities and their quest for human dignity. He has since become a beloved role model for millions of Chinese with disabilities. Although Hou Bin has spent decades in the limelight, his successful transition from sports star to motivational speaker belies a painful inner struggle to overcome the stigmatization that Chinese society places on people with disabilities. His fear of being exiled by society due to his disability has haunted the athlete for the nearly 30 years.

“My Story may Change You”

On one of the hottest days since March in the city of Zhangzhou, a black business car drove slowly through the stadium entrance of Zhangzhou Yizhong High School. At 3:00 pm, as the warm-up music ended, the car door opened and Hou Bin carefully stepped out. Wearing a suit and tie, he eagerly entered the stage and waved to the throngs of excited students, saying, “Call me brother Hou, okay?” Three thousand students chanted jubilantly, “Brother Hou! Hou brother!”

After listening to the renowned track and field star talk for two-and-a-half hours, the students swarmed the athlete, asking, “Can we look at your prosthetic leg?” “Can we hug you?” Happy to meet them all, Hou Bin signed autographs, had his photo taken, and opened his arms wide to embrace them.

Speaking in front of 3,000 people is no big deal for Hou Bin. Over the past ten years he has visited 27 countries and made more than 1,500 inspirational speeches to tens of thousands of people, from the school children of migrant workers to the United Nations’ Doha Youth forum.

In 2009, Hou Bin became the first Chinese youth speaker at the United Nations’ Youth Assembly. This opportunity marked the first time a Chinese person with a disability had been invited as a special guest to participate, and the first time the US media dubbed him “China Bin.”

On the day before the speech, Hou Bin spent time with his sponsors, a famous businessman and former classmate of Hou Bin’s from Zhangzhou, and his wife. A variety of works of art—porcelain enamel, Shoushan stone carvings, and lacquer ware—were displayed in their elegant living room. Hou Bin was familiar with each piece and even knew the names of the artists.

Admiring the collection, he randomly picked up a pink puppet on display and said thoughtfully, “I was from the northeast of Xiamen in 1999, practicing the high jump for more than a year, without a friend. I had a doll just like this one, and I talked to it daily.” The couple was touched by the athlete’s openness and tenderness. By nature, Hou Bin is a highly-sensitive listener who responds thoughtfully to questions. When a friend talked about his own uncertain future, Hou Bin quoted one of Buddhist Master Cheng Yen’s aphorisms: “Do not underestimate yourself; people have unlimited potential.” Hou Bin then drew an example from his own life: “If you set your target’s height, you will determine your future. When others’ goal was to make the 1.8- meter jump, I set my goal for two meters. Then I made a 1.94 meter jump and broke the world record.”

Many of his friends, whom themselves are successful and dedicated businessmen, love chatting with Hou Bin and find his speeches very inspirational. As one friend explains, “It’s difficult to describe my feelings about his speeches, but the closest description would be that they’re a positive force.”

From Second Place to First

Hou Bin infuses his speeches with positive messages and topics, such as, “Let the children become champions in life”, “Do not let anyone steal your dreams”, and “How to become a world champion.” The word “dream” remains a constant, one that he uses in every speech because he believes that if there is a dream, there is a future.

Perhaps nowhere was his dream more readily realized than during his awe-inspiring performance in the opening ceremonies at the 2008 Beijing Paralympic Games. With the Olympic torch attached to his wheelchair, Hou Bin used his hands and a rope to lift himself and his wheelchair up by the strength of his own arms to the top of Beijing National Stadium, where he lit the cauld ron to mark the beginning of the games. He accomplished this feat in just 3 minutes, covering 100 feet of an arduous climb. The 90,000 attendees were moved by his incredible performance.

Ironically, Hou Bin was not the first but the second choice to carry the Olympic torch. The first choice was a champion athlete in shot put. Competing for the honor required climbing three-quarters of a mile on the first day of training, but the shot-put athlete had sprung ahead of Hou Bin. However, over the course of just a few days, Hou Bin improved. He explains: “After the 2004 Paralympic Games in Athens, we canceled all of our competitions. The shot-put athlete stopped practicing, but I continued.” Eventually, Hou Bin grew stronger than his shot-put rival by working out on iron bars to build his upper-body strength.

The actual training sessions, however, were risky. “A pull rope could be very easily twisted,” he says. “Sometimes my wheelchair became stuck at the top, and I would have to wait to be rescued.” But Hou Bin always chose to be the first one to ascend.

The training camp, located outside of Beijing, was plagued by locusts and made living conditions harsh. Once, the training director, Zhang Yimou, called during practice to check on the athletes’ progress, and Hou Bin was left stranded in midair. Volunteers told the director that the athlete who was in second place, Hou Bin, was stuck and waiting to be saved. A risk taker during the 15-days of training, he eventually became the number one athlete chosen to light the cauldron. When asked from where he derives his perseverance, Hou Bin re flects: “Maybe I got used to facing challenges. When able-bodied people use their backs to jump, for example, I prefer to jump in a diving style. I have to face my challenges and move forward, no matter what.”

Sharing His Own Story

Without question, carrying the torch for the 2008 Paralympic Games has been the highlight of Hou Bin’s life, thus far. After the games, the media interviewed him nonstop for a month. But then, he hit his lowest point, when his fear returned of being just another person with a disability in a society that undervalues such people.

Upon retirement from track and field, he was at a loss for a while. He knew that he needed to find a purpose beyond his disability and yearned to do something more meaningful. That opportunity arrived a few months later, when he received a phone call from a school inviting him to speak as an Olympic champion, but without compensation. Other Olympians had refused the deal, but as a Paralympian, Hou Bin welcomed the invitation. “I wanted to tell them my story, so I could have every opportunity to affect their lives,” he says. The audience’s applause also uplifted him. “I’d been depressed for three decades, and suddenly there was a stage that gave me the chance to speak from my heart. When I laugh, my audience laughs with me. When I cry, they cry too,” he says. In 1996, when he won his first Paralympic gold medal in the high jump, he had to make a speech, but others had written a formal speech. At just 21 years old at the time, he was too nervous to read it and even mispronounced a line.

He has deliberately chosen not to speak about his personal suffering in his speeches. When he lost his left leg in 1984, his mother’s hair turned white overnight, and his Dad had to borrow money to treat his son’s leg. Hou Bin even entertained suicidal thoughts when he stood at the Jiamusi riverbank. But since his experience lighting the Olympic cauldron, he says he never gives up on anything and likes to share his successes in the hopes that he inspires others to dream big.

Born with a Restless Nature

Behind this seemingly unintentional, ...
Login to read the full article. SIGN UP HERE FOR YOUR FREE MEMBERSHIP
If you are already a member, welcome back! LOGIN HERE

This story is part of a series of articles published as an exclusive editorial exchange between China Press For People with Disabilities & Spring Breeze and ABILITY Magazine. Photography by Lulu Liao. Knowing the importance of a good prosthetic, Hou Bin launched his “Stand Up Again” project