In the Business of Spreading Happiness: John’s Crazy Socks

Donuts, sushi, cute kittens or funny quotes: If you need a creative and fun pair of socks, John’s Crazy Socks will likely have what you are looking for. John Cronin is the co-founder and face of the most diversely stocked sock company in the world. Together with his dad Mark, John is on a mission to spread happiness and raise awareness of what people with disabilities can do. Now, his company is a multi-million-dollar social enterprise that supports charities, changes disability policies, and, of course, sells “Socks, socks and more socks.”

“Let’s open a fun store!” John tells his dad. “A business that makes people happy.” And that’s exactly what he did. John is the face of Crazy Socks, a multi-million-dollar sock empire. Together with his dad Mark, John created the world’s largest variety of colorful socks, with 2300 different designs–a sock lover’s dream. They aren’t just any socks though, they are fun socks! So fun, these socks have been adorned by high profile sock wearers like the late President George H. W. Bush and Prime Minister Justin Trudeau.

John and Mark Cronin opened the store’s virtual doors on December 9, 2016, in New York and shipped 452 orders in the first month alone. Their quick business success proved a good choice over John’s original idea to open a food truck. When they figured out that neither father nor son can cook, “John had his Eureka moment,” Mark emphasizes. “Socks are fun! Colorful! I wore crazy socks my entire life,” John added. And the idea for the store was born.

The reason behind Crazy Socks’ existence, however, is based on a challenge many people with developmental disabilities face. “Throughout the state, when you have a disability, you can stay in the public school system until you either graduate or turn 21,” Mark said. “This is sometimes called the 21-year-old cliff.” He explained that for as long as the children are in school, all the services they need are available, but once they leave the system, they are on their own.

“I have been looking at jobs, but I didn’t find an option I liked,” John said. “The reality is there aren’t a lot of good choices for people with different abilities,” Mark added. But John showed he was a natural entrepreneur.

Instead of seeing his situation as a problem, John saw it as an opportunity to create his own store. “I wanted to work with dad, so I  said, ‘Let’s have a nice father-son-business together,’” John said. John and Mark were convinced, if John loved his crazy socks so much, others might too, and they went into business together. “I love working with my dad because he is really fun, and I love when he tells a joke. He is just my favorite,” John explained. John continued by turning to Mark, “I love you, dad.” 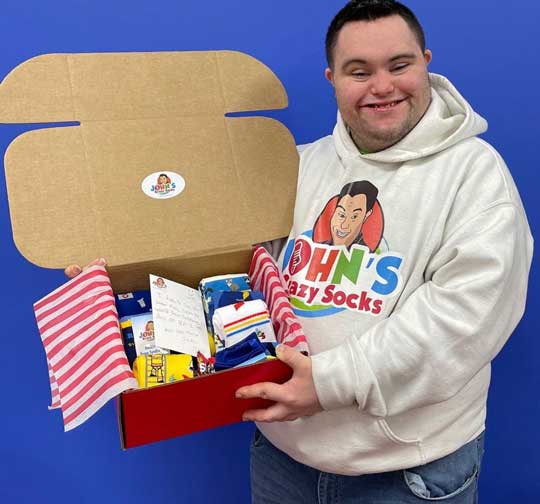 John and Mark set up a website, created some Facebook videos of John talking about socks, and John came up with the company’s new slogan, “Socks, socks and more socks.” John delivered their first orders himself to his local community. Mark explained John’s dedication, “Sometimes, we would be there at 10 PM at night, and John was knocking on doors to deliver socks.” John added, “Customers looooooved our socks!” Four years later, John’s Crazy Socks is a thriving company selling crazy socks… and spreading joy.

Every sock is packed with love. Each box includes a piece of candy and a personal note from John. They also put in a sticker with the names and photos of the people who packed the order. By the way, pickers are called sock wranglers, and the packers are happiness packers. All of the employees put a lot of thought into the packages. “One of our packers comes to me and says, ‘Listen, we are sending candy to every customer, but we also sell socks to diabetics. What are we doing? We are sending candies to diabetics!’” They solved the issue by having a supply of sugar-free candy to satisfy the different customer’s needs.

“Do something for others because we, here, have a mission to spread happiness.” John’s Crazy Socks has both a social mission and a business mission, and those are inseparable. “If all we did was sell socks, nobody would hear of us,” Mark explains. John and Mark always look for a personal connection with their customers, which distinguishes John’s Crazy Socks from other businesses.

Giving back is one of the pillars the company is built on.

John doesn’t only sell socks; he also wears a specific pair each day. Saturday, for example, is poop emoji sock day. John’s favorite design is the Down syndrome awareness sock that has a little cape attached to it, a design he created himself. “It just comes out of my head,” John said describing how he gets the ideas for the socks. Mark added, “We have a diverse organization, and that’s important. We want different tastes, different opinions.”

John’s Crazy Socks is a social enterprise. “We are not really a sock store. We are more in the business of telling a story, and the socks become the physical manifestation,” Mark explained. Giving back is one of the pillars the company is built on. In addition to their awareness socks, they also donate five percent of all earnings to the Special Olympics. Overall, they have donated $400,000 to various charities.

“Showing what people with different abilities can do.”

Today, John’s Crazy Socks has 30 employees, of which 21 have a disability. By hiring people with disabilities, the company wants to inspire and create hope. “People have an emotional connection right away. It meant so much to see someone with Down syndrome starting and leading a business,” Mark says. “The most important thing we do is showing what people with different abilities can do.”

Besides their work with the business, John and Mark give five to six school tours per week–virtually at the moment and in person before the pandemic. They speak at events all around the world. “This week alone, we spoke to a group in Wisconsin, Israel, Ghana, the Ozarks, Maryland. It’s wonderful!” Mark says. They both work from 9AM to 6PM in the business, then they personally deliver socks to customers or have other events online at home after hours. They attend events over the weekends as well.

Almost two years ago, John and Mark had a fundraising event in New York City and didn’t make it back home until 2 in the morning. Mark told John to sleep in the next day and just rest and recover. Mark explained, “So I go to the office about 10 o’clock in the morning. Who is walking in? John! And he says, ‘I took an Uber here; I got things to do!’”

“We have a responsibility.”

Mark and John use every chance to be politically active. When they went to an event at Capitol Hill, a customer called and to Mark that her mother works there and is a big fan of John’s Crazy Socks. The customer asked if it was possible for them to stop by and see her mother. “Sure,” they said.

The customer’s mom happened to be Speaker of the House Nancy Pelosi. “We walk in, and what we often forget about our elected officials is that they are all just humans. She is a grandmother! So, we come in, and she immediately takes out pictures of socks that she gave to former President Bush,” Mark explained.

They all quickly bonded and had a great time. However, Mark and John also knew they had an obligation. “So, we say, ‘Ms. Pelosi, this is very nice, and thank you, but we really need to speak about eliminating the sub-minimum wage.’”

How to spread happiness during COVID?

2020 was a challenging year for John and Mark. COVID-19  impacted both business and personal lives. On a business level, they faced hurdles related to safety. They established a rigorous program to keep their employees as safe as possible with temperature screening, mask-wearing, constant cleaning and rearranging offices. They brought in the head of infectious disease from a local hospital to show the staff how to wash their hands. “Then we needed to figure out what new needs and opportunities were out there. We wanted to support the healthcare workers and created healthcare superhero socks,” Mark says. To keep spreading happiness, John organized an online dance party held every Tuesday. Twice a week, they did a Facebook live show, telling jokes.

“But then, as careful as we were, we still contracted the virus. My wife, John and I, got the virus right before Christmas,” Mark says. They all got sick the Monday before the Holidays. Since people with Down syndrome are more likely to develop severe life-threatening complications from COVID, Mark mainly focused his attention on John’s health.

“By Thursday night, John was really struggling to breathe. By Friday, we took him to the hospital,” Mark says. His oxygen levels had dropped, and John was immediately admitted. Right away, John received a cocktail including oxygen, steroids, Remdesivir, antibiotics, and blood thinners. Sunday morning, John was waking up, gasping for air. His oxygen levels had fallen further. “They discussed putting him on a ventilator,” Mark explains. He was moved to the critical care unit and allowed Mark to stay with him for the whole time. “But who knows why, all of a sudden, all the meds kicked in, and he turned a corner.” John came home on New Year’s Day.

To show appreciation for the dedication of the healthcare staff, John and Mark decided to give back and donate socks to the hospital. “We not only used that event to give back to the hospital workers but also to raise awareness for Down syndrome,” Mark said. People with Down syndrome are not more likely to get the virus, but they are five times more likely to end up in hospital and ten times more likely to die from it. “People with disabilities are undertreated, especially those with developmental disabilities. Some of this is lack of access, but much of it is they have trouble articulating what’s going on, some may be non-verbal. And medical professionals often don’t have the time to understand.” As general advice to people that work with persons with Down syndrome, Mark said, “Focus on what people can do. Don’t underestimate them. John is a capable person. He started a multi-million-dollar business.”

John made a full recovery and is already back in his business, spreading joy and happiness with his customers, hosting dance parties, and sending out socks.

“All of this adds up to happiness,” Mark says. “I am never happier than when I step outside my door and see this building filled with people working,” Mark adds.

Editorial Note: John is an actor and part of the abilityE platform. 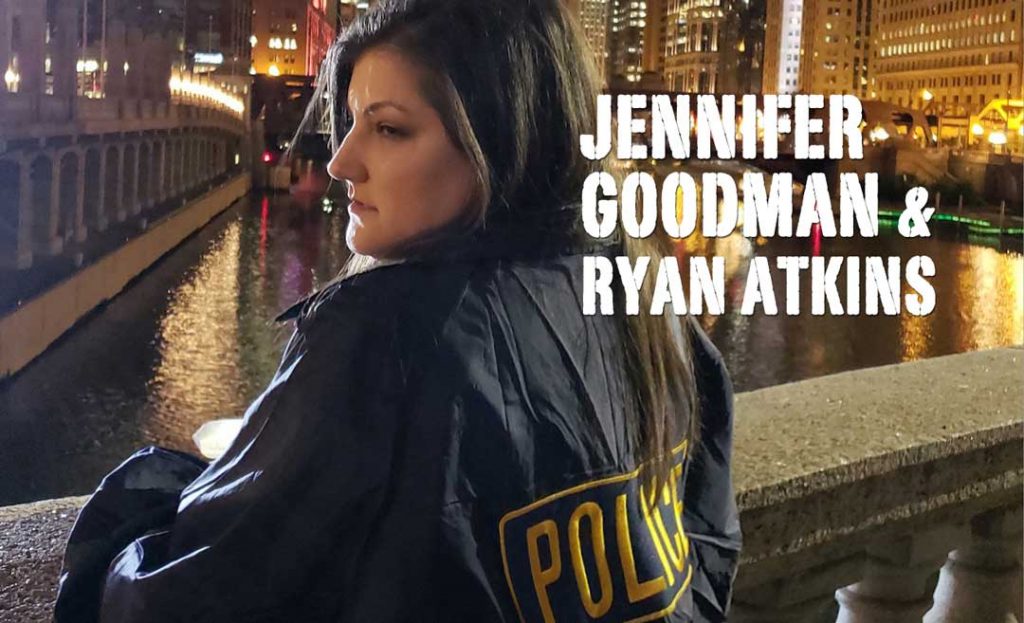 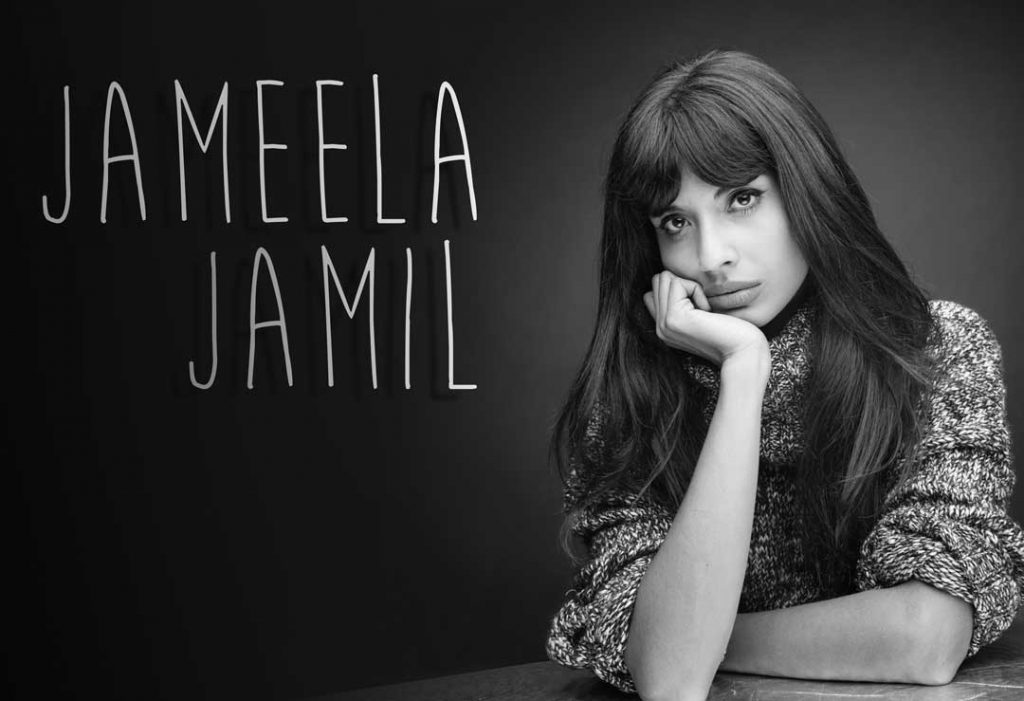