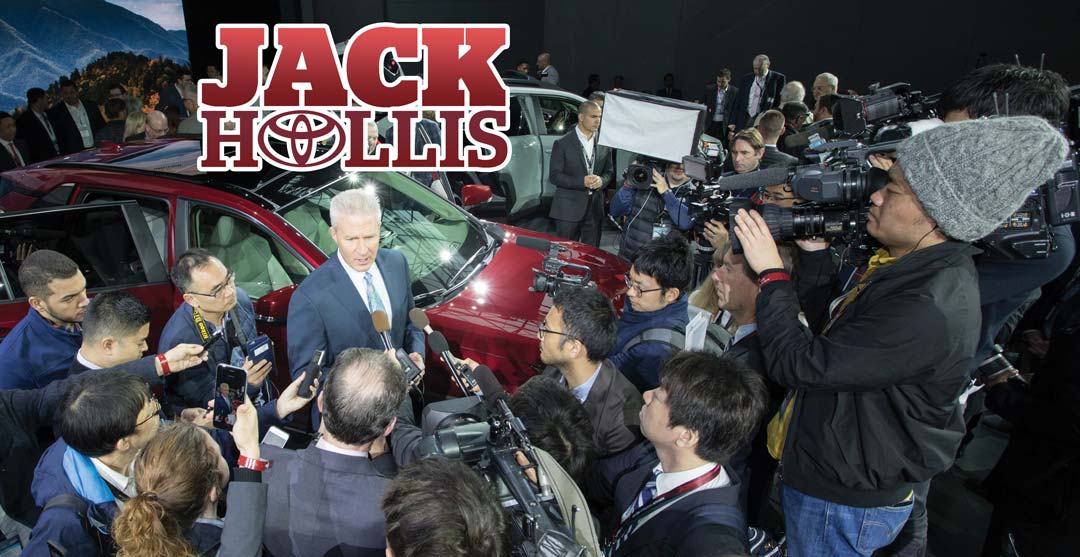 As the world’s largest automotive manufacturer, Toyota has long been hailed as an industry innovator. In 2015, the forward-thinking company announced it would commit a billion dollars over a five-year period to artificial intelligence and robotics research. They’ve also steered themselves smartly into the role of being a global mobility company. For eight years now, they’ve partnered with The International Olympic and the International Paralympic Committees, supporting and championing athletes of all mobilities, such as Amy Purdy, a world-renowned Paralympian snowboarder. To deepen their commitment, Toyota launched a global marketing campaign this year—called “Start Your Impossible”— with the aim of creating a more inclusive society for all.

Recently, at the Milken Institute’s Global Conference in Los Angeles, ABILITY’s Chet Cooper sat down with Jack Hollis, group vice president and general manager of the Toyota Division at Toyota Motor North America & marketing advisor for Toyota’s global Olympics and Paralympics sponsorship, along with Amy Purdy. They chatted about cutting-edge technology, the Olympics/Paralympics and Amy’s role in that process.

Chet Cooper: Is there a connection between your sports background and Toyota’s Olympics and Paralympics sponsorship?

Jack Hollis: It’s funny how the connection goes. I do have a background in professional sports with baseball, and my family’s been involved in professional sports. My father’s a professional golfer. My grandfather’s in the Hall of Fame for baseball, and my uncle is a baseball player. I’ve been passionate about sports but mostly about competition. I love the process. I love the discipline it takes to be an athlete. It’s an amazing focus. I tend to be more of a team sport person. I’ve learned about the idea of how to work as a team. It’s not too different. It’s still one athlete performing, and there are still teams of people that come together. I got involved when Toyota went forward and decided to sponsor the Olympics and the Paralympics.

Cooper: Was this before the Olympics and Paralympics joined forces?

Hollis: Yes. I don’t even know if Amy knows.

My background in sports helped me to be known a little bit within Toyota North America. When Mr. Toyoda made the commitment to the International Olympic Committee (IOC) and the International Paralympic Committee (IPC) under separate agreements, we were creating a new global marketing department. Now, we’ve never had a global marketing campaign, a global marketing effort, ever, in Toyota. So you need to understand we are always very regional-based. When the Olympics came on, there were questions regarding the contract; what we were going to do, how we were going to promote it.

At some meeting between our CEO, Jim Lentz, and Mr. Toyota, our global CEO, the question was brought up of: do we have anybody globally who would not only be interested, but has a passion for sports who we might be able to utilize in a role to benefit our partnership? And Mr. Lentz said, “Jack Hollis has a background,” and at that time I was the head of marketing for the US, so it worked perfectly. So that’s how I got involved. They brought me in right away. This was before the full contracts were signed.

And I have a passion! I truly love every Olympic sport, summer and winter, and continuously follow them. By learning every IOC element, by going through it all, our company started understanding my passion for the Olympics, but also an equal passion for the Paralympics. And what was interesting is, at the time, I had not spoken directly with Mr. Toyota but to other executives about our focus as a company. One thing we quickly realized was that we wanted to commit similar dollars to both the Olympic and Paralympic Games. Many people questioned that, because when you look at a return on investment, the return on the Paralympic Games is not nearly as high as the return on the Olympic Games.

Hollis: It’s true. And London was what helped so much on the Paralympic side. There’s a lot of other pieces to this story that are not necessarily pertinent to what we might want to talk about, but that’s the background on me.

Hollis: On a scale of zero to one hundred, I was probably in the twenty-fifth percentile. I was aware. I had watched para-athletic competitions. And like I said before, being a sports competitor, I liked watching amazing athletes compete.

I’m always trying to figure out what I can learn. My interest in the Paralympic Games went up immensely when I met the Paralympic International Committee (PIC) in Lausanne, Switzerland, when we brought the IPC and IOC together for a meeting. To follow up on what you mentioned a second ago, my most proud moment so far was in our marketing conversations regarding how we were going to talk about the logos. The use of the logos and the rings and the Agitos Foundation side by side was very important to us, and to me personally. I said, “If we’re going to do this, we’re not trying to discriminate or exclude, but include.” We said, “We feel like our sponsorship is for the entire entity of competitiveness, whether it be the Olympics or Paralympics.” It didn’t matter. Our big breakthrough was when we went to the IOC and looked at some of their rules. You have to get their permission, because it’s their brand; they have the rings, and that’s what they’re known for. So we said, “We would like to market parathletes in the Olympic Games and athletes in the Paralympic Games.” Again, we weren’t deciphering the exact sport they were in or whether they were able-bodied or super-able-bodied. We weren’t discriminating. We were just saying it was important to us, and we wanted to put them together. ...
Login to read the full article. SIGN UP HERE FOR YOUR FREE MEMBERSHIP
If you are already a member, welcome back! LOGIN HERE