JON CRYER — Two and a Half Miles for Shane’s Inspiration 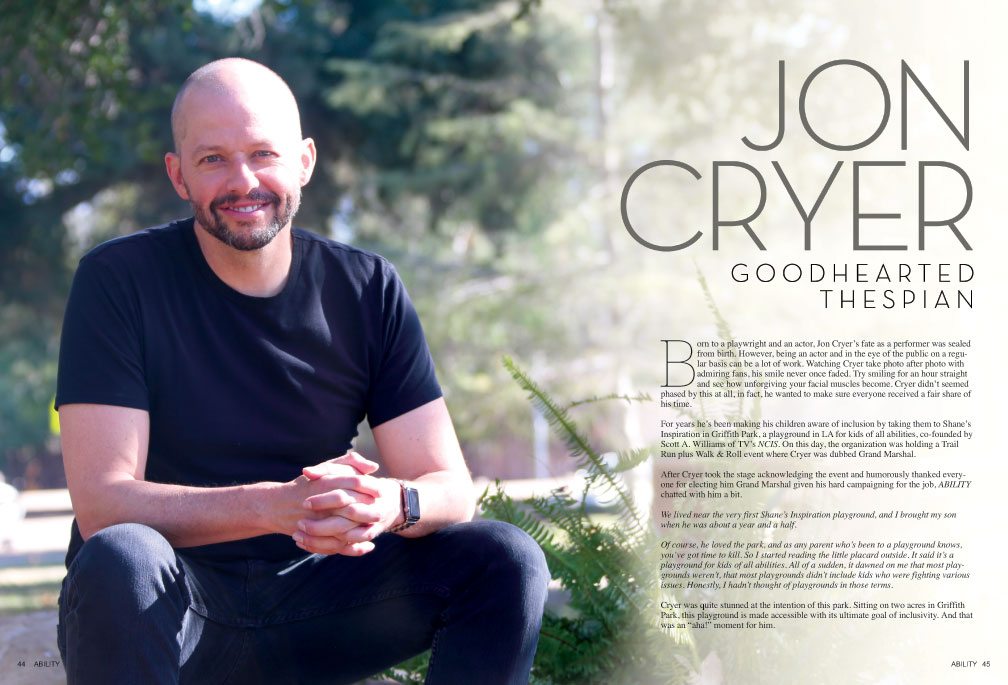 Born to a playwright and an actor, Jon Cryer’s fate as a performer was sealed from birth. However, being an actor and in the eye of the public on a regular basis can be a lot of work. Watching Cryer take photo after photo with admiring fans, his smile never once faded. Try smiling for an hour straight and see how unforgiving your facial muscles become. Cryer didn’t seemed phased by this at all, in fact, he wanted to make sure everyone received a fair share of his time.

For years he’s been making his children aware of inclusion by taking them to Shane’s Inspiration in Griffith Park, a playground in LA for kids of all abilities, co-founded by Scott A. Williams of TV’s NCIS. On this day, the organization was holding a Trail Run plus Walk & Roll event where Cryer was dubbed Grand Marshal.

After Cryer took the stage acknowledging the event and humorously thanked everyone for electing him Grand Marshal given his hard campaigning for the job, ABILITY chatted with him a bit.

We lived near the very first Shane’s Inspiration playground, and I brought my son when he was about a year and a half.

Cryer was quite stunned at the intention of this park. Sitting on two acres in Griffith Park, this playground is made accessible with its ultimate goal of inclusivity. And that was an “aha!” moment for him.

That touched me. Many years later, when I was working on NCIS, playing a character I really, really enjoyed, I got to meet Scott Williams, who wrote the episode. We got to talking about a million things, at one point he casually dropped the fact that he and his wife Catherine had founded Shane’s Inspiration, and I was gobsmacked. I was so grateful to them.

Having an enormous admiration for what had been built, Cryer remembered the name of the park and soon recommended it to all of his friends.

First and foremost, it’s a really fun park, and the influence of Shane’s Inspiration has been felt literally worldwide in terms of how playgrounds are made and whom they’re designed for.

It’s amazing how much it has grown since I first took my son. Originally there was just one playground here in Griffith Park, and now they have them all over the world.

Shane’s Inspiration parks have been built in many countries, and an announcement was just made regarding the construction of one in Moscow.

People the world over are realizing this is something that is needed, but people weren’t thinking about this when they were building places for children.

Whether you fell in love with his role as “Duckie” in Pretty in Pink or his award-wining character of “Alan Harper” on Two and a Half Men, he’s a dynamic performer with a career that began at a very young age. We were curious on how he felt about being asked questions he’s probably answered over and over again. And then Jon gave us a little history of how he got into acting.

You don’t become an actor hoping nobody will ever care about what you do.

You have to expect that to a certain extent people will be curious. That’s fine.

I grew up in New York City, and both my parents were actors, so I was always around it. I was backstage at theaters onand off-Broadway. My dad was in The Fantasticks, which is a show that ran for, like, 30 years offBroadway.

I was born on a Friday night at 8:15—15 minutes after show time. And my mom is a playwright, so I grew up in that world. I knew pretty much, from when I was eight or nine years old, that this is what I wanted to do, just because it’s so stupid, it’s such a silly job. I kind of can’t believe people get paid for it.

But of course, many people do it and don’t get paid. That was something I learned later. But at any rate, I went to a theater camp in upstate New York and was doing 18 musicals a summer.

It was one of those things where I never gave myself another option. I never really had anything to fall back on. It was this or nothing.

It’s rare to meet performers that this is all they’ve done. Usually they’ve had different careers and had steppingstones.

My first job was as an usher at a theater, and then I moved up to house manager, which meant I got to clean toilets.

And here’s when we inserted a comment we couldn’t pass up: If done well you can be flushed with success.

Exactly! That’s my special skill. But I didn’t give myself an alternative, and I also got incredibly lucky, because when I was about 17 or 18, there was a huge burst of teen movies, and lots of parts for people my age. You can’t bank on that. But I just got lucky. So I started working when I was 18, got my first couple of jobs. My first gig was as Matthew Broderick’s understudy in Brighton Beach Memoirs; I lasted six weeks before they fired me.

And then I did the Broadway show Torch Song Trilogy, which took me to the Los Angeles production of the show, and once I was in LA I got jobs in movies, and the rest just happened.

Cryer says he went to theater first, but always loved movies and feels he was a TV addict from the time I was seven years old. A New York native, he went back and forth to Los Angeles until a lovely addition was made to his life.

I’m a New Yorker, so you never stop being a New Yorker. But I was bicoastal until my son was born in 2000. I still had my apartment and still went back whenever I could. But interestingly, I never got as much work in New York as I did in LA. That’s just where it happened to be.

People with disabilities are amongst the largest minority groups in any country, and social media platforms are allowing a venue for voices to be heard. With such a large and growing pool of incredible actors with disabilities in the industry, producers, directors, casting agents no longer have the excuse of not being able to tap into it.

Unfortunately, Cryer’s response to seeing actors with disabilities in the industry, is not all that rare.

Interestingly, little people have always been a part of show business as performers, but I’ve started to see them as crew members as well, which, obviously, is a welcome change. But no, that has been an issue generally, even when they’re casting. They’ll often cast somebody who doesn’t have a disability to play somebody with a disability. And often it’s out of producers either not knowing there’s a community of performers with disabilities, or they assume there will be production issues that will make somebody who’s dealing with, say, a wheelchair, difficult to get in and out of a location. But usually it’s just ignorance. They’re not aware.

Also, we don’t have an infrastructure to create a community of performers with disabilities yet. It’s changing, though. Spring Awakening at the Wallis Annenberg Center for the Performing Arts with Deaf West Theater; they did a magnificent production and half the cast was deaf. It was an amazing piece of work. Deaf West is creating an infrastructure, but I think producers just aren’t aware of it.

KMR Talent Agency is currently the only agency with a diversity department that’s specifically for actors and models with disabilities; their dedication in submitting and making noise about their clients isn’t going unnoticed.

It’s really awareness at this point. There’s no lack of good will. People are, I’m sure, happy to do it. It was like the TV show Glee, where they had a wonderful character who was disabled but wasn’t played by an actor with a disability.

Successful actors such as Danny Woodburn have been very outspoken in the media in raising awareness for the lack of actors with disabilities in the forefront of the industry. ABILITY Corps is creating the Actors with Disabilities Audition Fund to help with auditions and headshots. Actors are spending a lot of money and half the day getting to an audition, where there’s about 20 more actors using wheelchairs showing up for the same small part—and then not getting it.

That happens sometimes. I’ve been to those auditions where you look around and say, “Oh, geez, there’s so many of us! This is brutal!” Like I said, producers need to understand there are performers who are out there who are capable and willing to do it. The casting people are getting better at it, but again, it’s a community that has to be built.

Seeing his passion towards what has and can be done, Cryer is ahead of the game than most when it comes to awareness and inclusivity. He and wife Lisa are active in other charitable efforts as well, such as the San Fernando Valley Rescue Mission.

It’s for homeless families. It’s a remarkable, remarkable place. Their old facility just burned down this year. Thankfully, they were in the midst of building a new facility, so they were able to ramp it up and get families in there. But they do amazing work. I used to do work with My Friend’s Place, which is for homeless teenagers in Hollywood. They’re remarkable.

“Good Morning! Welcome to another day of higher education!” (Pretty in Pink) 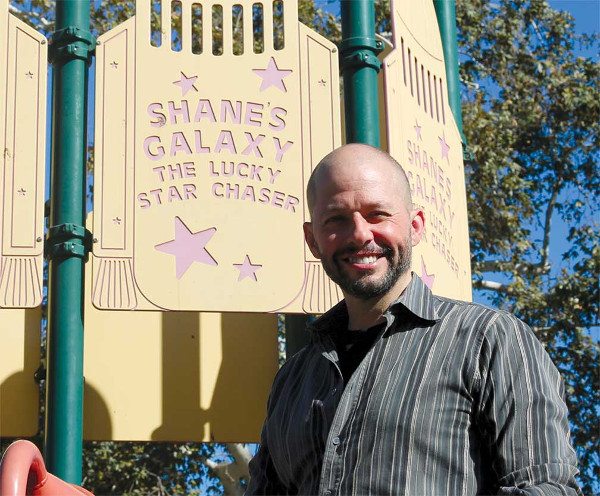 Shane’s Inspiration is a non-profit organization uniting children of all abilities through inclusive playgrounds.

In 1997, Shane Alexander Williams came into his parents’ lives for a beautiful but brief moment. Born with spinal muscular atrophy, Shane passed away two weeks after his birth. Through their profound grief, Catherine CurryWilliams and Scott Williams began searching for a way to honor their son’s life. They soon realized that Shane’s disability would have prevented him from playing on a playground with other children. At that time, there were no truly accessible playgrounds in the Western United States.

So a year later, Catherine, Scott, and close friend Tiffany Harris, were rallying friends, family, and community leaders to build the very first Universally Accessible Playground in California. In 2000, they cut the ribbon on “Shane’s Inspiration Playground” in LA’s Griffith Park, beginning a wave of inclusive play that would change our city forever.

There are 56 playgrounds around the world and many more in development. If you would like to build a universally accessible and inclusive playground, the organization offers to be there from project development to the grand opening.