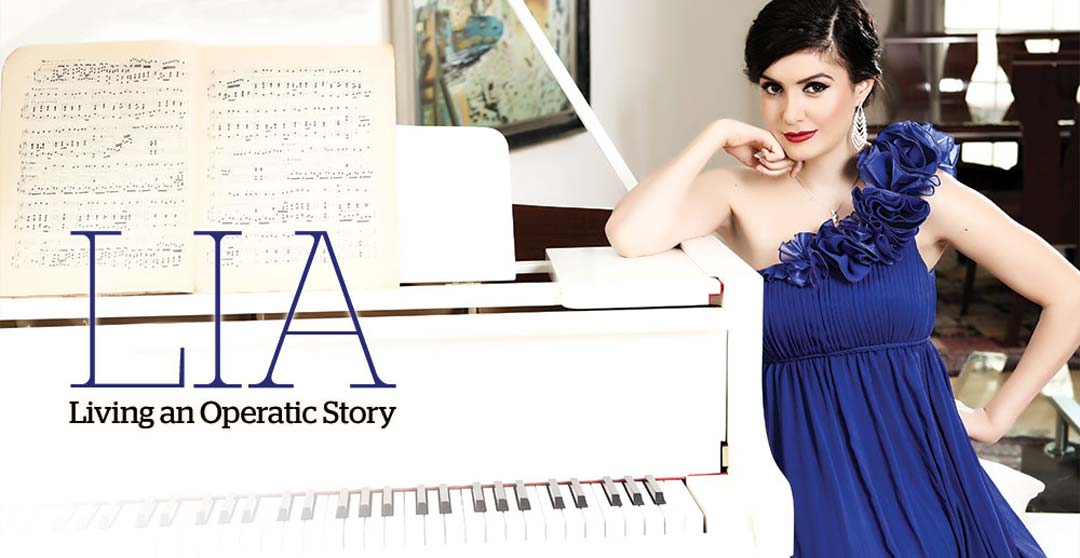 It’s true, in an instant, your life can change; an accident, a ruptured aneurysm, blunt trauma to the head, a cancer diagnosis. With Lia, it’s been slow, temperamental and undiagnosed. Her blasé attitude makes one wonder if she’s just used to her body’s deception. She isn’t, she just knows where her energy is best channeled— through music and laughter.

Talented actor, musician and good friend of ABILITY, Max Gail, turns the mic to become the interviewer and witness to Lia’s infectious spirit.

Max Gail: So what’s goin’ on with you?

Lia: Plenty. Music—I have a few dates set up for performances, and in the meantime I’m working on new pieces and potential recordings, mostly classical pieces and arias.

Max: When did you know that you had the facility, appetite and the calling to sing that kind of music?

Lia: My father did a lot of theater and singing, and he’s still quite the entertainer. My mom is a classical pianist, turned nursing professor, and now I’ve trapped her back into playing so she could accompany me, which is wonderful. And my grandmother was a theater and stage performer, grandfather writes poetry. A lot of it runs through my veins.

Lia: I was on stage quite a bit in my younger years, whether I was singing or theater. A lot of poetry writing. This classical chapter of my singing, began a few years ago, after I—I was on a hiatus from being happy. Then, I met Arman Nshanian, without whom my voice would have no armor. And his grandmother, my maestro, soprano Anna Nshanian, she is my portal to all things classical. I have been, and as long as I can, will be singing. When I’m singing, I don’t recognize what my mouth is producing, it’s euphoric.

Max: So it’s just part of life for you, all of those things that were around you. That’s wonderful.

Lia: I absolutely love and respect creativity, being able to explore various avenues.

Max: With this mysterious set of challenges you’ve been dealing with, have you found that you’ve had to reroute some things? Is the singing actually helpful with that? I sing kind of like a frog. I sing anyway. My twin sister studied voice for a long time, so I’m kind of in awe of what happens when people really create a song and people go, “Oh, wow!” But I am curious what that interaction is, if any. 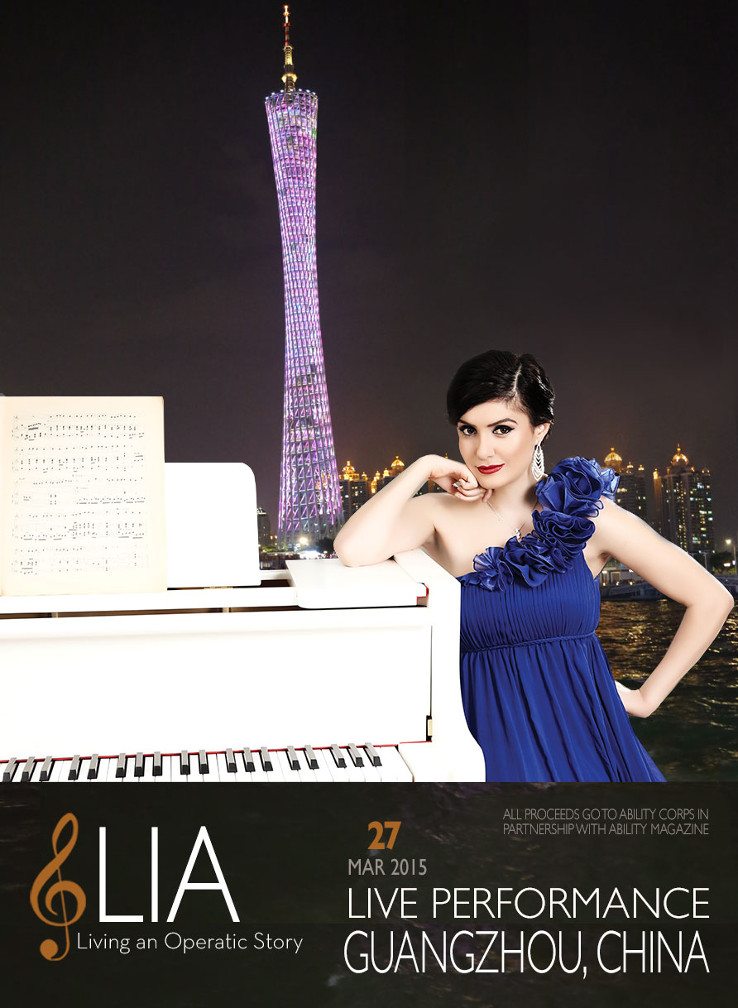 Lia: Well, I can’t run around the stage anymore. But, physically, what’s been happening hasn’t held me back from exploring music. I think it’s more of what I’ve personally been allowing myself to be exposed to. I would have had challenges period, just a different set of. I think my perfectionist attitude is more of a challenge than anything physically that comes my way.

Lia: The reality is when I’m singing, I can’t focus on anything but. It is unusually freeing.

Max: When I hear people sing in ways that if I try to do it when I’m sure nobody’s listening, I end up kind of hurting myself.

But the sense of it is of connecting with anyone who can hear it. It’s soaring in space, in a way.

Lia: That’s a good word to use. You’re definitely connecting and communicating on another level. And people feel it in different ways. If not audibly, through vibrations. My dear friend and comedic hoot, Kathy Buckley, was explaining to me the feeling of music through vibrations and frequencies. Music has a direct connection to your soul.

Max: It seems to me it’s essential. The birds sing, the whales sing. Humans, when someone makes a sound, whether you’re hearing Ray Charles or Liberace or whatever, it’s like you feel that vibration in your own body. I don’t know another word to use, but when I’m touched my music, it’s a healing.

Lia: There’s a lot of studies around music, healing and being able to communicate in ways you might not have the ability to at that moment but once there’s music, things change. We’ve been looking at music and memory. There have been studies with Alzheimer’s and dementia patients and the power of music, tapping into emotion and memory.

Lia: It is absolutely amazing.

Max: There are people who are totally withdrawn and someone starts singing to them, and they come alive and will remember lyrics to songs when they can’t remember their name. What I know so far, Lia, what I think so far is, there’s more mystery to what’s going on with you than answers.

Max: And maybe you could bring me up to speed with that, of what actually it is that you’re dealing with in some kind of way that the medical folks have been able to identify.

Lia: Sure. I’ll go back a few years. Growing up my health was smooth sailing. At about nine and a half years old, I began experiencing weakness in my legs. And unpleasant, excruciating pain in my legs. This was around the time when I was in acting classes preparing head shots, going on auditions and starting my career as becoming a young actress. My goal was to be on the Disney Channel. Oh, how I dreamt of being on Disney.

It was a blast adding this to my awkward teenage years. You never really get used to it, just deal with whatever comes, as it comes.

Lia: Perhaps, but I’ve faced my fair share of—doctors haven’t been shy with trying to diagnose me with whatever comes to mind.

Max: Aha! So you’ve had plenty of people come up with their idea of what’s going on?

Lia: I’ve had three or four buckets full of diagnoses. Can’t blame them for trying.

Lia: So, I’ve had some interesting experiences growing up and built quite a tough exterior for myself.

Max: Yeah, for some reason I thought this was all later onset. I didn’t realize that this had been going on for so long.

Lia: It’s dragged on. For now, based on my symptoms, the verbiage we use is motor sensory peripheral neuropathy, which basically means that I have trouble with the movement and feeling of my lower extremities.

Lia: We see pieces, but not enough to put the puzzle together.

Max: (laughs) Have you heard of anybody or met anybody who seems to be similar enough to feel like you know might be dealing with the same thing?

Lia: When we we went to the Middle East, a mutual friend introduced us to an aspiring Palestinian model. Prior to going into the restaurant where we were going to meet, I noticed this young lady walking in. Arm in arm, for support, with another person. She had an almost identical gait as me. My initial reaction was, “Oh, hell no!” (laughter) That was a fun memory.

Max: So now you’re getting ready to go to China and sing?

Max: That’s really exciting. Have you found an accompanist, got that part of it worked out?

Lia: I have a couple of pieces that I’ll be using recorded accompaniment, courtesy of my mother.

Max: That must have been neat with your mom.

Lia: She’s a woman of many talents.

Lia: It’s quite an experience!

Max: That must be very cool for her, too, for the two of you.

Lia: Sometimes she’ll get lost in my singing and stop playing. (laughter) It’s hilarious. She says, “I’m sorry, I just got so into what you were doing!” I told her she can’t be doing that when we’re onstage. It’s wonderful to be able to share this with her.

Max: I think that is all really nice. What about your poetry? What is your poetry to you?

Lia: I think poetry is a creative combination of words that have come together like never before. I use poetry as a way of getting things out of my mind and onto the piece of paper. Performing them is another exciting art form.

Max: When you say perform them, you mean you recite them? Does music come into that?

Lia: Yes, I do mean reciting. The combination of music and poetry is something I’m working on. My one-woman show will have plenty of this woven into it.

Max: Those two have a natural fit. Things want to come off the page once they’re on the page.

Max: Even when we speak, there’s music.

Max: Yeah (laughs). There’s melody and rhythm and all the things that make music, music. The best songs are where the melody helps to bring out what’s being expressed. That opens up a wonderful big open door.

Can you tell me more about your one-woman show?

Max: Where are you originally from, Lia?

Max: Do you still go back there?

Lia: I go back as frequently as I can, but I haven’t been able to for at least two summers. I have a sense of calmness when I’m there.

Max: I didn’t know you were born there. You came here at an early age?

Lia: Yes, I was about three. I sent for my family when I settled in.

Max: Where in the States did you arrive?

Lia: Exactly where I am now, California. It’s known to have the biggest population of Armenians outside of Armenia. That’s where I am. 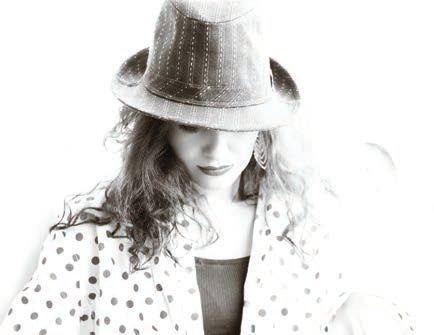 Max: I dated an Armenian girl back in Detroit, when I was in college, and I remember going to a family gathering. I’m a Midwestern guy, I kind of thought—it was the first time I ever experienced a whole bunch of people who were checking me out, and I was coming out sort of okay with them, but at the same time, I knew it would be a really big deal to go any further with that relationship. (laughs)

Max: I didn’t know how close everyone was. It opened me up to ways people can be connected as family. I just didn’t have that sensibility. Armenians have had a very particular journey in the last century or so.

Lia: Yes. This year will mark the 100th anniversary since the Armenian genocide that occurred in 1915.

Lia: Now we have George Clooney and his incredibly intelligent wife, Amal Clooney, who are fighting for human rights and recognition of the genocide. The goal is recognizing and preventing these atrocities from happening.

Max: We have to keep hoping for the best. Before we go, what’s your favorite color? 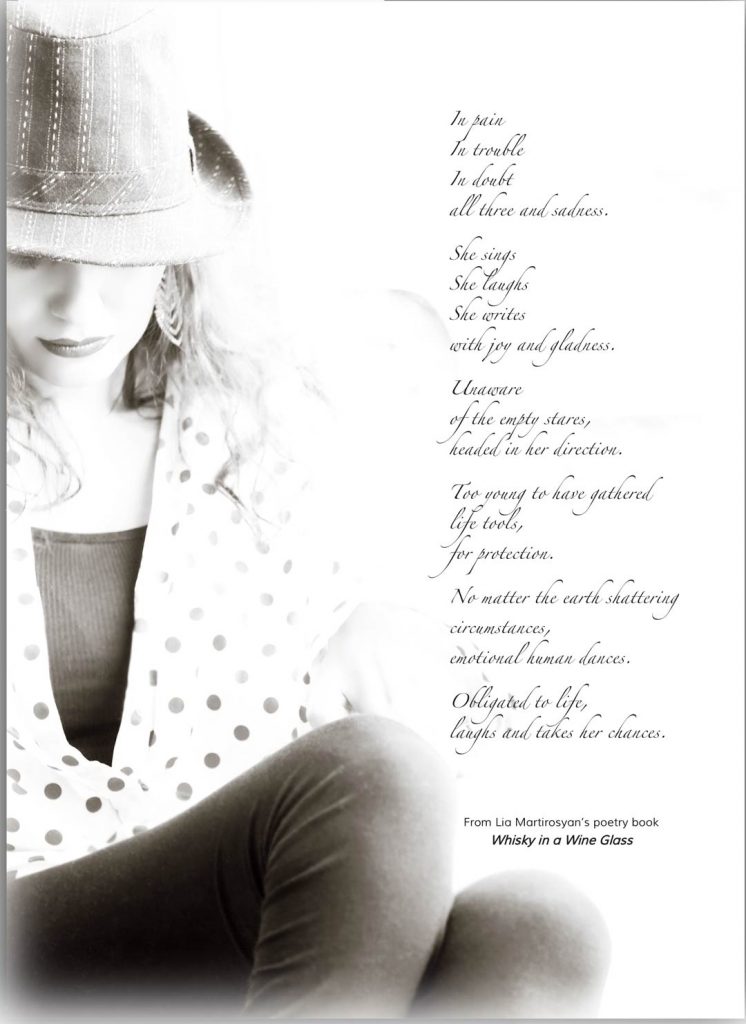