Libya – Cleaning Up the Explosive Remnants of War 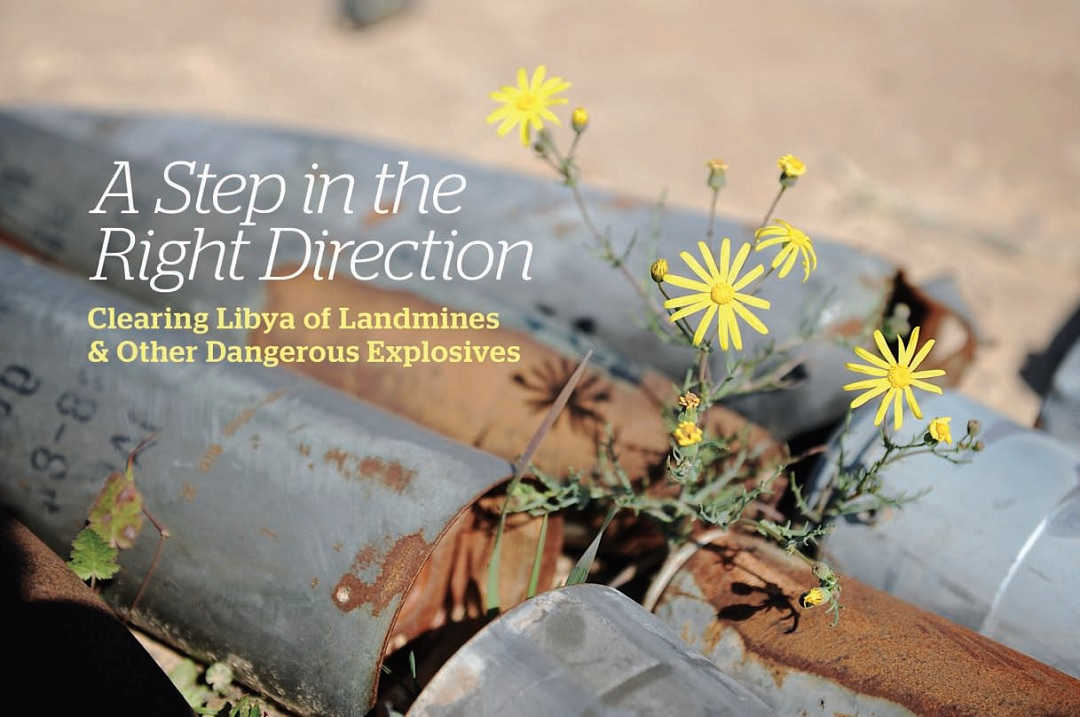 Younis Saleh Alzway and his family were among the majority of civilians who fled their homes in the northeastern city of Ajdabiya when the Libyan revolution began more than a year ago. They returned months later, after forces loyal to Libya’s longtime autocrat, Colonel Muammar Gaddafi, reclaimed the city.

Then, last June, Younis’ three children and two of their cousins were playing in a bedroom at Younis’ home when they found a strange object. The thing began to smoke and make an odd noise. They called to Younis who—realizing it was a grenade—grabbed it from them. He ordered everyone to leave the room, and held the explosive close to his chest to protect his family as best he could.

Seconds later, the grenade went off, killing him and two of his children instantly. His wife, who was standing at the entrance to the children’s room, sustained head injuries. The three children who survived were injured, as well. One incurred chest wounds and needs a retinal operation, while another lost her left eye and still has shrapnel in her legs. A cousin suffered wounds to her abdomen, back of her neck, stomach and right cheek.

Sadly, the family’s plight is not unusual in Libya. Although the major fighting seen during last year’s revolt ended when Gaddafi was killed last October, the threat to civilians remains. Countless anti-personnel landmines and explosive remnants of war (ERW)—unexploded devices and missiles—litter Libya’s former combat zones, homes, schools and public spaces. To prevent accidents from these weapons, which are scattered throughout the country, our nongovernmental organization, Handicap International, is raising awareness of the dangers posed by the country’s ERW.

Located in North Africa along the shores of the Mediterranean Sea, Libya shares borders with Egypt, Chad, Sudan, Niger, Algeria and Tunisia. The majority of its 6.4 million people speak Arabic and practice Islam. The main exports of this mostly desert nation are crude oil, petroleum products and natural gas.

In 2011, Gaddafi’s 42-year reign ended following a six-month uprising and ensuing civil war that was inspired, at least in part, by protests that are still sweeping through the Arab world, commonly referred to as the Arab Spring. Libya is currently governed by the National Transitional Council, which emerged from the rebellion and announced plans to hold elections some time in 2012.

After the fighting ends in any country that has known war, the first thing people want to do is return home, even though their neighborhoods have been bombed and mined. As a result, many civilians unwittingly put themselves at risk.

The total number of casualties from landmines and ERW in Libya is unknown, but mine and ERW casualty estimates worldwide ranged from 1,852 to 12,258 through the end of 2010, according to the 2011 Landmine and Cluster Munitions Monitor. And the number of casualties from landmines and ERW—including cluster munition remnants—was expected to be significantly higher in 2011.

Our organization is working to reduce the incidence and effects of armed violence from landmines, unexploded ordnance, small arms and light weapons in 18 of the 63 countries where we operate, including Libya.

Humanitarian mine action is composed of a number of activities, including finding the mines, clearing them, educating the public that they exist, assisting those who have been harmed, and providing local, national and international advocacy.

Our campaign began in Libya in the spring of last year, soon after the revolt against Gaddafi began. We have since trained approximately 100 Libyan nationals to raise awareness among people at risk from mines and other ERW in areas of the country where much of the fighting occurred between rebel militias and forces loyal to Gaddafi.  ...
Login to read the full article. SIGN UP HERE FOR YOUR FREE MEMBERSHIP
If you are already a member, welcome back! LOGIN HERE

Maio is manager of Handicap International’s operations in Libya. The organization was founded in 1982 to improve the lives of people in post-conflict or low-income countries around the world, enabling them to overcome disabling situations and reclaim their independence. Since then, it has grown to include eight national associations based in Europe (with headquarters in Lyon, France), Canada and the United States. The organization was a co-winner of the 1997 Nobel Peace Prize.

CHIME – a Charter School with it’s Thinking Cap On

The Cracks of Life