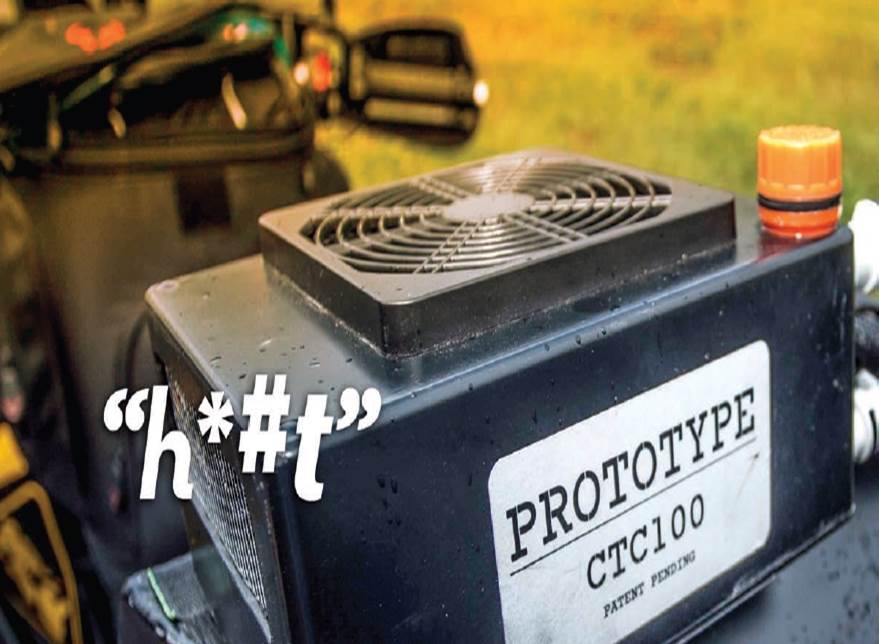 Heat is a four-letter word for those of us who have multiple sclerosis (MS). In fact, a common way to test for MS years ago was to toss the patient into a hot tub and see what stewed. Known as the “Hot Bath Method,” a person with MS symptoms was observed while in a tub of hot water, where the appearance or worsening of neurologic symptoms was used as a positive diagnosis of MS. It was certainly a lot cheaper than today’s method of using MRI scans.

Temperature’s effect on patients with MS is called Uhthoff’s phenomenon, first described in 1890 by Dr. Wilhelm Uhthoff. An elevated core body temperature, even as slight as one-quarter to one-half of a degree, can further impair the ability of already compromised nerves to conduct electrical impulses, resulting in a temporary worsening of MS symptoms. Core temperature can rise due to hot weather, exercise sunbathing, emotions, stress, fever, illness or catching on fire. I also find that vacuuming, ironing, grocery shopping, washing dishes and folding laundry are also big triggers for me, that’s why I’m so helpful around the house.

Heat prevents the body’s nerve fibers from working properly, especially if the nerve or myelin insulation has been damaged. The nerves are supposed to allow the brain to send messages to other parts of the body. With MS, the insulation, or myelin sheath, surrounding the nerve axon it protects has been chewed away leaving scar tissue in the brain and spinal cord. At normal body temperature, a message barely gets through via the damaged pathway, and when heated up the message almost certainly fails to make it through. Therefore, symptoms usually worsen. If a person with MS had fuses or circuit breakers in their head, for example, overheating would cause them to trip or blow. This is typically not a sign of new damage, but of a temporary problem. These periodic attacks caused by heat, as well as similar ones brought on by fatigue, are called pseudoexacerbations. Cooling down resets the circuit breakers and symptoms seem to reverse.

By now you can see why staying cool for me and others with MS is extremely important. Riding a motorcycle requires strength and dexterity, it also demands that you stay extremely alert. If someone with MS has an attack in the nerves within the legs, then it could cause them to be unstable and require a cane or wheelchair until the relapse subsides. Eventually they may regain most or all of their ability to walk normally again, but when the body heats up, the legs can become unstable.

There is no magic number for me. I’ve had issues when the temperature is 65 degrees, and I’ve endured 85-degree days without noticing many problems. Humidity may also play a role, but it really is different for each of us, and it can depend on the situation as well. As a general rule, I try to stay away from outside temperatures of 80 degrees or warmer, and 70 or above indoors.

My issues are mostly cognitive. A hot-headed biker who doesn’t know his own name or has trouble remembering if he should put his feet down at a red light, might be funny to watch on a YouTube video, but in reality it’s dangerous.

I recently rode 750 miles from my home in New Hampshire to the AMA’s Vintage Motorcycle Days at the Mid-Ohio Sports Car Course, where I was invited to give my presentation of “Having MS is Like Riding a Russian Ural in the Iron Butt Rally.” For me, a 750-mile day is really not a big deal, except for the fact that it was July, and by midday the temperature was flirting with triple digits. Thanks to a new invention, keeping my body cool was as simple as clicking a little blue button until the digital read-out showed the temperature I wanted: for this trip, 69 degrees, which felt perfect. I have met quite a few riders since embarking on this journey, and the conversation always turns to dealing with the heat. Most riders just flat out do not ride in hot weather. Others use cooling ties or vests containing gel that absorbs ice-cold water and will keep you cool for a while. Some use vests that hold ice packs. I gave up on most of these methods and started to rely on my two favorites: tossing my helmet into big ice coolers outside gas stations while I took a break inside, and switching the thermostat readout on my dashboard when I wasn’t paying attention from Fahrenheit to Celsius!

The device I recently tested is a prototype, code named CTC100, and is the brainchild of John Sims from Manassas, VA. A fellow motorcyclist who can’t stand the heat, John reached out to me this past winter, after reading about my million mile mission to raise awareness for MS. John has developed a variety of personal temperature controlling systems for scuba divers, medical and emergency personnel. Unlike the cooling products available on the market today, his revolutionary system uses the bike’s electrical system and proprietary circuitry to cool or heat water moving through surgical tubes sewn into a special shirt.

My introduction to this innovation began with a phone call.

“Hey Paul, we would like to show you our new cooling system that doesn’t require any maintenance or ice. If you’re interested, we could build one for your bike and would love to have you really put it to the test.”

“Hell yes,” I exclaimed as I hung up the phone, grabbing my helmet and riding the 500 miles down to Virginia.

Because of proprietary circuitry, John asked me to sign a non-disclosure agreement, and so out of full disclosure I had to tell him exactly how the last time I signed such an agreement panned out. It was 2001, and I was secretly given the first 750cc Ural motorcycle to be registered in the USA. After blowing it up during the first 200 miles of the 11-day, 11,000-mile Iron Butt Rally, a few days later I was given the second and only remaining 750cc engine in the entire country, which I proceeded to destroy as well.

I met up with John and his crew and rode a Victory cruiser set up with the cooling system. It did indeed work as described over the phone.

“Ok, I’ve got to have one of these,” I declared. They promised to build one and install it on my bike.

It’s been three months now since I started using John’s prototype climate control system designed for motorcyclists. The system is the first of its kind to reach patent pending status, and for all the abuse I put this proof of concept model through, it has survived. I believe it will have a huge impact on how many of us ride in the near future. Inability to maintain a comfortable temperature is one of the reasons many riders dangerously choose to shed their protective gear in the summer, or send their bikes into hibernation over the winter months. Imagine riding fully suited up in Death Valley in July while it’s a comfortable 70 degrees inside your jacket or helmet. Instead of stopping to bulk up on layers when the temperature drops in the evening, you just tap the red button and in moments you feel warm and fuzzy, as if you’d stopped for a bowl of hot chicken soup. With a range of 50 to 118 degrees, the system can precisely control the climate inside your riding gear.

Heated clothing for motorcycles is nothing new; I’ve been using heated gear for over 20 years. I’ve had various jacket liners, vests and gloves that use thin wires with electricity running through them to keep me warm. There are cooling systems made for riders as well, and I’ve tried most of them: the cooling ties, vests and ice chest systems. They work for a period of time, some as little as 10 minutes; the best for a few hours. The systems all require repeated actions of rewetting, stopping for ice or refreezing icepacks. If you’re going out for a 25-50 mile ride, then these systems would probably work just fine. But if you ride your motorcycle long distances like I do,

then these methods require more effort than I want to bother with on each and every ride. This is because this new system offers distinct advantages: It requires no maintenance, no ice and no soaking, while never losing its cooling or heating effectiveness. Plug it in and ride. How cool is that?

Although my prototype is about the size of a lunch box, the production version will be much smaller and may be part of a jacket lining, a tank bag or quite possibly the bike itself.

“We will be leaving that up to the manufacturer who ends up producing the system,” stated Sims. “We are now looking for a manufacturer or developer to take these systems to the next level,” he said, and then added, “we have the patents on the way and believe we have proven the concept works.”

I hope they do find a manufacturer, because the system not only works, it works exceptionally well. For me, staying cool while riding means being safer and staying alive. For these reasons, John won’t be getting his CTC100 personal climate system back from me anytime soon; I just changed my phone number.