Ledell Lee, a prisoner on death row in Arkansas, submitted a new request to the Arkansas parole board asking for new consideration of his 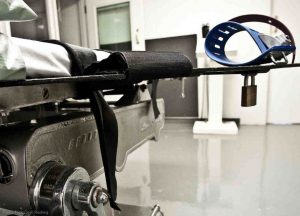 application for clemency in light of new evidence that he has intellectual disability, and because of his innocence.

Over the course of his case, his attorneys repeatedly failed to raise his intellectual disability.

Included in the package is a letter to Gov. Asa Hutchinson from Peter Berns, CEO of The Arc a national non-profit with a 65-year history of promoting civil rights for individuals with intellectual and developmental disabilities. The letter urges Gov. Hutchinson to stay Lee’s execution based on the medical evaluation of Lee this month.

“Lee’s history is replete with evidence indicating a potential intellectual disability diagnosis, which would bring him under the protection of the U.S. Supreme Court’s decisions,” said Berns.

The evidence points to new information from Dr. Dale Watson, a neuropsychologist who said that under full evaluation Lee would likely meet the three requisites of an intellectual disability diagnosis: significantly impaired intellectual functioning, adaptive behavior deficits, and origination of the disability before the age of 18.

This new information submitted to the clemency board was also provided to the federal court regarding the truncation in clemency procedures for eight Arkansas prisoners caused by the compressed schedule of executions of those eight prisoners in just 11 days this month.

A copy of the appeal filed is available here:
aclu.org/legal-document/ledell-lee-v-state-arkansas-motion-reconsider

A copy of the letter from The Arc is available here:
aclu.org/legal-document/ledell-lee-v-state-arkansas-ex-3-arc-clemency-letter