Since April I have been involved in a top-secret project, but now I can finally talk about it. A couple of years ago I received an award from a woman’s stunt show group for my Red Bull commercial. To pick up the trophy, I went out to California, attended one of their stunt workshops, and got a chance to meet some really cool women!

Last year, someone from that event contacted me, and told me that Feld Entertainment was looking for some “stunt” women to ride dirt bikes for a new traveling show they were putting together.

My good friend, Brittany, who also rides, contacted the person who was looking for riders to get more information, like how many people they were looking for and what kinds of skills they needed for the show. Since we are racers and not really stunt women, we wanted to see what everything was about before we said “yes.”

The contact person explained to us that it was going to be a traveling show based on Marvel comic books, and that they were looking for girls to be part of the villain group to ride dirt bikes and do fight scenes.

We told them that we were interested and to keep us posted as things developed. They told us that because it was such a big show, we would probably have to audition for it. Brittany and I were in Florida visiting my family and hanging out when the Feld/Marvel group contacted us again and asked us to meet up with them in Orlando for a fight-scene audition.

Before we flew back to California, they chose a place for us to audition near the Orlando airport. I was so nervous! We knew how to ride, but we certainly didn’t know how to ride and fight at the same time. They showed us some basic moves. From there, we had to act them out. One time I fell so hard I wanted to scream, but I acted like nothing was wrong, which is kind of like racing! We had to jump from the top of a warehouse, 30-feet up, onto an air-mattress pit, which was nerve wracking, too! But when we finished, they said we did really well, and that we would hear from someone soon. 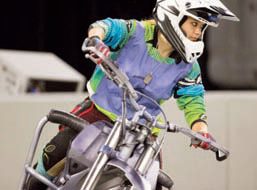 So we went back home and waited for their call.

After a month or so, they contacted us and asked us to be part of the group. It was great to be asked, but I wasn’t sure I really wanted to do it. I had to commit for a whole year, which involved training, traveling and being away from home, friends and family!

Finally, I decided that this was a fresh new direction,

and I should go for it. I would get to ride and travel the US, two things I love to do! I closed up my house and went back to Florida to train for this new adventure.

When I arrived in Florida, I realized that there were other racers who were going to be involved in the show. Some of the young women that I’ve know for a while and raced with were there, so it was a relief to know I wasn’t going to be in it alone.

So far we have been practicing several months, and it’s been pretty intense. The good part is that the show is now opening. Everyone is so excited because we’ve all worked very hard.

Marvel Universe Live is an ambitious show involving Marvel comic book characters. It has a storyline that includes tons of car crashes, motorcycle stunts, fires breaking out here and there. In short, it has it all.

I hope everyone will love the show and I’m really excited to be a part of it! If you check out the website, you can find out when a show will be coming to your area. Come say “hi” to me after the show. I would love that!