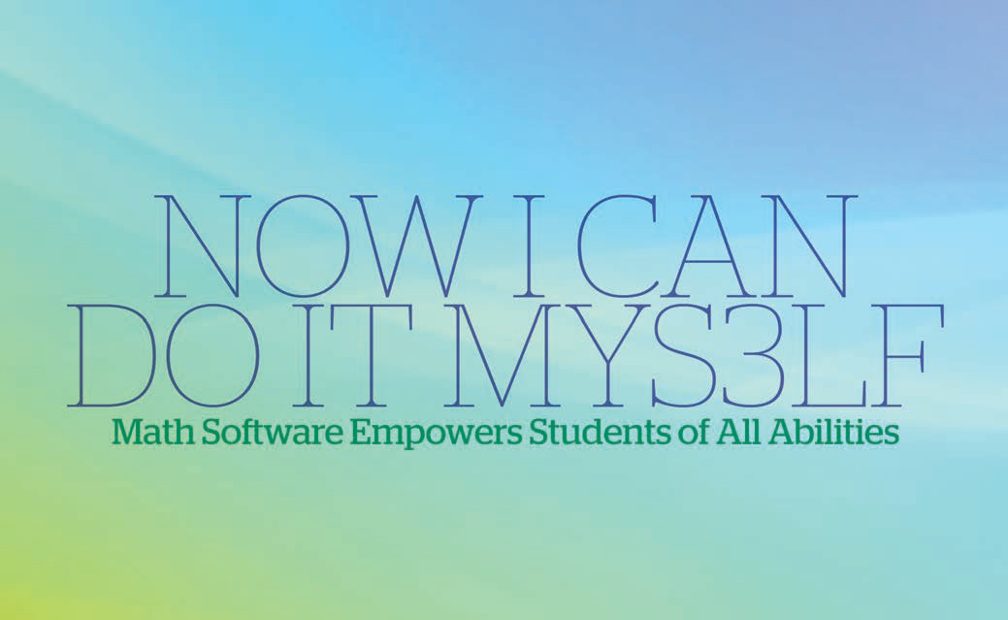 Our economy increasingly depends on technology. So many of the best-paying jobs in the coming years will be in that arena. In fact, there were 6.2 million scientists and engineers in the US in 2012, according to the Federation of American Scientists. Unfortunately, people who are blind are vastly underrepresented in technological fields.

A great many of today’s schools also rely on technology to teach. In a math classroom, it’s not unusual to see a student in front of a computer wearing a headset and progressing through a lesson plan.

A few years ago in some Kentucky classrooms, students with dyslexia got a chance to try technology to see if it would help them not only read the text in their books, but also to solve the math problems. The results were a success in more ways than one: Not only did kids’ scores go up faster than even the students who didn’t have dyslexia, but their sense of empowerment also increased. They no longer waited for a teacher’s aide to come by and read with them; they could listen to parts of the book as many times as they needed to without embarrassment. “Now I can do it myself,” they said.

When I started exploring math accessibility more than a decade ago, this is what I hoped would happen. At the time, I worked on Wolfram Research’s Mathematica product. One day, John Gardner, a physicist who lost his sight late in life, contacted me and explained the obstacles he encountered trying to use sophisticated Mathematica software. It was an intriguing issue to tackle, and one that could potentially open the world of scientific computation to people with vision disabilities. So with Wolfram’s consent, I developed a prototype that thrilled John. For various reasons, however, Wolfram decided not to turn the prototype into a product.

Design Science in Long Beach, CA, expressed an interest in making accessible math software, and I joined their team to pursue my ideas. The company had already developed a free plug-in to Internet Explorer called MathPlayer that would display MathML. We received a grant from the National Science Foundation (NSF) to explore making MathPlayer accessible to everyone. We finished the prototype of MathPlayer 2 within the grant’s six-month time line, and the version we released was well received.

To “speak” math, as in so much of human language, there are many special cases and exceptions. The initial version of MathPlayer had a few dozen special cases. The current version has over a thousand. Every new iteration of the software adds more rules, so that the speech gets closer and closer to what a teacher might say in the classroom. Educational Testing Service (ETS) received a Department of Education grant that helped us develop a more natural language for “speaking” math, and to expand MathPlayer so that it works with Microsoft Word.

With the release of MathPlayer 2, people who were blind or had other learning challenges could use the software to read a web page with math in it for the first time. This proved to be a big hit when I showed it off at conferences, and eventually I heard back from teachers and parents who said the product made a significant difference in their children’s education.

During the ETS grant period that lead to the release of the beta version of MathPlayer 4 last March, I joined my ETS colleagues Beth Brownstein and Lois Frankel at the Texas School for the Blind and Visually Impaired. There we met a student who was preparing to head off to college the following year. He tried out the precursor to MathPlayer 4, which included the ability to move around an expression, as well as to relisten to parts of a problem. The more I showed him, the more excited the student got. By the end of the demo, he told me that he had been worried about how well he would do in a calculus course, but with the new MathPlayer he felt confident he could succeed.

I’VE BEEN WAITING FOR THIS

Sina Bahram, a bright PhD student in computer science also encouraged me, and contributed some ideas for MathPlayer 4’s design. After he gave it a try, Bahram, who is blind, sent me an email that read: “This is the first time in my life I can just open up a browser and begin interacting with mathematics. I’m not sure you can understand how profoundly wonderful that is to me, and how many years I’ve been waiting for such a thing.”

What a great feeling it is to know that MathPlayer has taken an important step towards increasing the representation of people who are blind in the fields of science, math and engineering. In the last year, about 700 people used the software to make math accessible on the web and in Microsoft Word documents.

It’s been a bumpy road getting to this point. There were barriers that couldn’t be solved simply by writing software. MathPlayer makes use of a W3C standard called MathML. When MathPlayer 2 was released, only Internet Explorer with the MathPlayer plug-in and Firefox supported it. Limited support of MathML meant that most people used images for math instead of MathML, which allowed the “math” to render everywhere. Textbooks had similar problems.

To resolve these issues, I joined several committees to ensure support for accessible math in standards for various formats such as DAISY books, the new EPUB 3 eBook format, PDF documents, and National Instructional Materials Act Standard (NIMAS) for K-12 textbooks.

After showing these groups demos of what could be done to support math, they all agreed that MathML was the way to go. The big breakthrough was last year when HTML5 became a standard, and MathML was part of it. Now it’s an official part of the language of the Web. The icing on the cake came this year when ISO and IEC groups adopted MathML, making it an international standard recognized by many governments.

Maybe you guessed this already, but I like math. Not the math taught in schools, which usually involves memorizing facts and formulas, but real math, which is about solving puzzles. I have been fortunate to meet people who’ve been willing to solve the puzzle of translating MathPlayer’s speech into other languages. Because of them, the software currently supports Chinese, Czech, Danish, Dutch, German, Greek, Finnish, French, Icelandic, Italian, Japanese, Norwegian,

Spanish and Swedish. Although three quarters of MathPlayer users are English speakers, about 25 percent use of one of the translations.

MathPlayer’s first international languages were Spanish and Chinese, the latter of which is by far the most popular. For these translations, we were lucky enough to find Dana Li, a high school intern who knew lots of math, had taken many years of Spanish, and was a native Chinese speaker. What I came to learn that first summer is that speaking a language doesn’t mean you have any idea how to speak math in that language. (For instance, can you say “the square root of 10” in that language?) When she joined Design Science for the summer, Dana came with a hidden advantage: Her mother had an engineering degree from a university in Beijing. As I told Dana’s mother, “Thank you Ms. Li. You went far beyond the standard scope of motherly love!”

In the past, educators could rightfully say that math accessibility was costly and difficult. By one estimate, converting a math textbook to Braille in the US costs about $60,000, and requires roughly six months. MathML and the digital era are changing that, helping us to enter a golden age of accessibility.

Safari and VoiceOver on Apple devices will also read, navigate, and create Braille on refreshable displays for MathML-encoded math on webpages. ChromeVox will do it on Chromebooks. JAWS, the screen reader with the largest share of the market, jumped on the bandwagon and released a new version last year that also reads MathML.

There’s more to this subject than reading and understanding equations. But here too, there’s been great progress recently in creating accessible calculators and software that can make mathematical plots accessible via sound, and combinations of hardware and software for enriching tactile diagrams, so that someone can use touch and feel, as well as hear information that isn’t easily represented in Braille.

The next big step is making it easy for people to do math on a computer, which should offer great benefits over pen and paper, as is the case with writing. Maybe I’ll be the one to develop that software, or perhaps someone will get there before me. But the most important thing is that it empowers people of all abilities to do the math.

Neil Soiffer is a senior scientist at Design Science, where he’s helped develop such standards as MathML, DAISY, EPUB3, NIMAS and PDF/UA. dessci.com