Should I Change my Latitude? 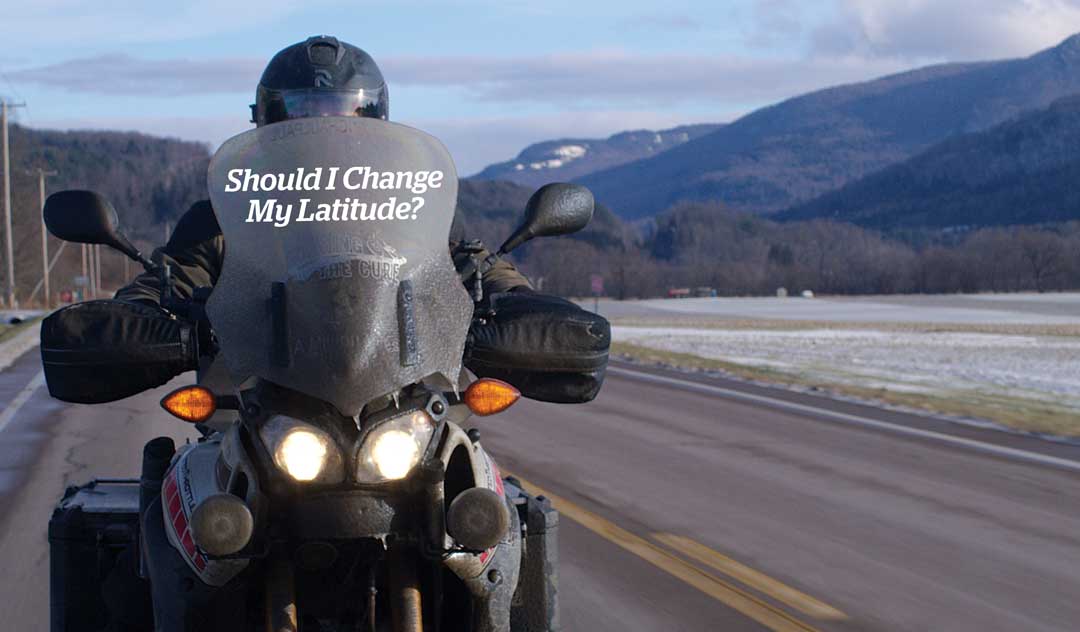 The New Hampshire winter started off pretty darn cold. December’s temperature never went above freezing, and the first snowfall is still on the ground, way at the bottom. Living in New England makes riding a motorcycle year-round a slightly unintelligent choice for transportation.

Last year I found myself on one of New Hampshire’s scenic byways right before a freak snowstorm hit. I survived to tell about it, and even better, I had the GoPro running. You think I would’ve learned my lesson.

A few weeks ago I got a call from a magazine wanting to run a feature story on my million-mile journey. The editor wanted to set up a date for me to meet with a local photographer on my side of the country. The plan was to take photos in a Vermont studio for half a day, and then spend a few hours riding down the road, in my element, followed by a van of photographers with cameras. A ten-page story was a big deal and was sure to bring me much needed exposure.

We settled on a Wednesday shoot as I was leaving the following day to ride down to Orlando for a presentation. I watched the weather carefully, and besides the temperature being in the teens, the meteorologists never made any mention of snow. Which was great, because motorcycles are not supposed to be ridden in the snow.

It has become frightfully clear to me that all the data we are storing in the Cloud these days is wreaking havoc on our weather forecasters. On the day of the shoot, just a few hours into my ride to Burlington, it started to snow. It was freezing cold, and now it was slippery. I tried to get off the highway at one point, but the bike just slid sideways

and somehow managed to stay upright. I decided to try making it off the next available ramp. The next exit was partially clear, so I turned off the ramp and made a slow right turn directly into a gas station. I parked under the fuel pump awning and cried Uncle. I phoned the photographer and asked if he could drive the remaining 10 miles or so to come pick me up. There was quite a bit of ice, so it took three of us to walk my bike to a parking space in front of the Dunkin Donuts. I grabbed my gear off the bike and abandoned it until later in the day.

The photo shoot was laid-back, no hair or makeup artist, and I didn’t even check myself in the mirror before we started. We did a video for the website, talked about my mission to ride a million miles for multiple sclerosis (MS) and my journey so far. By the time we stopped for lunch and went back to retrieve my bike, the temperature had risen to 25 degrees, the sun was out and the salted roads were starting to dissolve the ice.

I rode over a few miles of winding roads, with the camera crew in tow. We continually stopped and turned around to do it all again. Take one, take two, take three. By mid-afternoon we had finished all the road shots, shook hands, and I headed south to Orlando to speak at an MS patient event.

Although I try to stay away from snow and ice, I often find myself having to ride in extreme cold. Having the proper gear makes all the difference! When the temperature is only 15 degrees, and you are moving at 70 mph, it can feel more like 20 below. Warm but thin base layers are important, and I also rely on a heated jacket liner and heated gloves to keep me warm all year. My outer jacket is from a company called Aerostich and is made from high- quality waxed cotton to keep it waterproof.

I have a pair of leather Gore-Tex gloves that were customized by Ken Phenix of Phenix Flaming Hot Heated Motorcycle Gear. He can take any gloves and add carbon wiring to make the glove heated. My new HJC helmet has a special shield insert that prevents the frost and fog from blocking my view. A neck warmer, thick wool socks and long underwear are always worn underneath anytime the temperatures are expected to be chilly.

Having the right cold weather riding gear is not just for comfort, but it will save me from getting frostbite, or worse, freezing to death!

When I think about moving south, I remember how bad the heat affects my MS symptoms and soon realize I’d much rather keep dealing with the cold winters!

Is it spring yet?