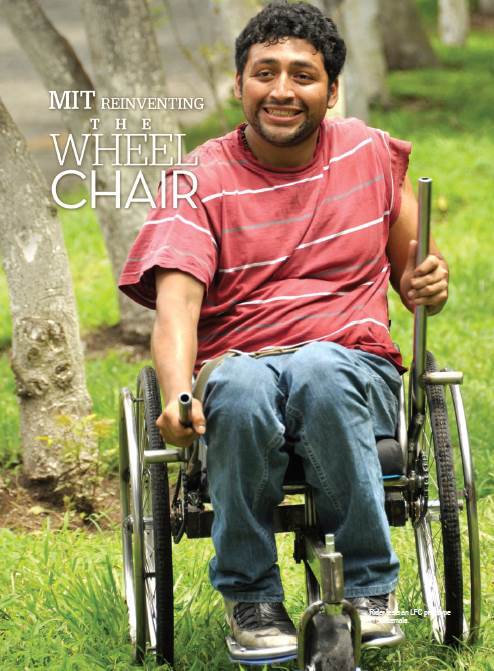 Out of a small seminar at the Massachusetts Institute of flobal (MIT), a team of inventors created a product that’s gone global.

Natasha “Tish” Scolnik, entrepreneur and graduate of the Cambridge, MA-based college, remembers the mechanical engineering course taught by Professor Amos Winter from about five years ago: it centered around wheelchair design. At the end of the term, she and a few students continued to work with him on product design and field testing.

The Leveraged Freedom Chair (LFC), is called “the mountain bike of wheelchairs,” because it’s mostly made up of bicycle parts. The chairs remove barriers for people with disabilities so they can go to school, work and participate in their communities.

“We started out with an initial set of design requirements that were all dictated by wheelchair users in developing countries,” Scolnik says. “They told us that they wanted a single device that was capable of long distance travel on rough terrain, but could still be used within a home or office.”

Winter’s seminar students examined existing wheelchairs that worked well indoors, yet performed poorly outside, as well as handcarts and tricycles that proved fine for long distances, but too big and bulky when used indoors.

“They were seeing a lot of products that were imported without any consideration for repairability or maintenance and then, things broke and couldn’t be used anymore,” Scolnik says.

So the MIT team designed the LFC from the ground up, engaging wheelchair riders throughout the process to ensure that the chair met their needs. The fact that they used bicycle parts found in any rural village enabled the chairs to be easily repaired and kept costs down.

Another innovative feature of the chair is that instead of pushing on the dirty wheels themselves, LFC riders push levers to get rolling. Grabbing low on the levers puts them in a higher gear, enabling them to travel 80 percent faster than in conventional chairs, while grabbing higher on the levers puts them in a lower gear, allowing them to power over obstacles such as mud, sand and slopes. The levers can also be removed and stored on the chair when a user goes indoors.

“We’ve gotten really great feedback on the LFC and yet, have gone back to the drawing board and changed the design several times” to make them even more responsive to consumer needs, Scolnik says. Over the last three years, the MIT crew has conducted field tests in East Africa, Guatemala and India.

The young entrepreneur’s burgeoning career has not gone unnoticed. In recent years, she’s been recognized by Glamour magazine, been named a Truman Scholar and received several fellowships from MIT’s Public Service Center. She’s spent time in the East African countries of Kenya, Tanzania and Uganda, learning to speak Swahili and interacting with local people to incorporate their feedback. She finds herself driven by a desire to make the LFC even better, and to improve the lives of those who rely on it.

In Tanzania, she helped four entrepreneurs with disabilities start small businesses, setting up a loan system so that they could buy wheelchairs along with business supplies, helping them secure bank accounts and supporting their struggles during their early ventures. The businesses sell clothing, jewelry and/or repair goods and shoes. One of the shoe-repair men used some of his profits to help two other entrepreneurs with disabilities set up their own shoeshine stalls.

Meanwhile, Scolnik worked with one of her community partners in Tanzania to build a new wheelchair workshop and skills training center, winning a Global Engagement Summit Project Challenge to the tune of a $3,500 grant—on top of more than $8,000 she raised herself. Through the Global Network of Science Academies, she and a Tanzanian community partner identified a plot of land for the wheelchair center.

The chairs are now starting to be manufactured in India and the MIT crew also has a partnership with a Kenyan design firm. A single wheelchair costs $250. In India, they can offer discounts for bulk orders.

“We really rely on the partners that we’re working with in the field to make sure that the wheelchair fits appropriately and that clients who require special seating are getting their needs met,” says Scolnik.

Recently, the wheelchair team began a separate start-up company, GRIT (Global Research Innovation and Technology), which is managing the marketing of the wheelchair. Winter, who is still a full-time professor at MIT, “has more of an interest in the product design and the field testing and less in the actual marketing of the product,” says Scolnik, who is the CEO of the venture.

MIT gets a percentage of GRIT’s profits, but its technology licensing office waived the right to the team’s patent, “so we own it separately. The school receives lots of good public relations, though, which they like,” she adds.

The company’s main focus is on the international market, even as Scolnik and the team explore creating a version for the US consumer.

“In terms of the US market, there is more variability in the options that we have here. Bicycle parts are still elements that we would like to include, although we could potentially use higher-end parts.”

The US team has been lucky to learn from other wheelchair providers in developing countries, which have found that shipping in parts, paired with local assembly, is the ideal arrangement.

It also creates jobs for people who live in the area.

In Haiti, the MIT team worked with government official, Gerald Oriol Jr., who is Secretary of State for the Integration of Persons with Disabilities. [Oriol, who uses a power scooter to get around, was featured in the February/March 2013 issue of ABILITY Magazine.]

Eventually, Scolnik and company received funding to do a test pilot in Haiti, where about 100,000 people became amputees after the 2010 earthquake.