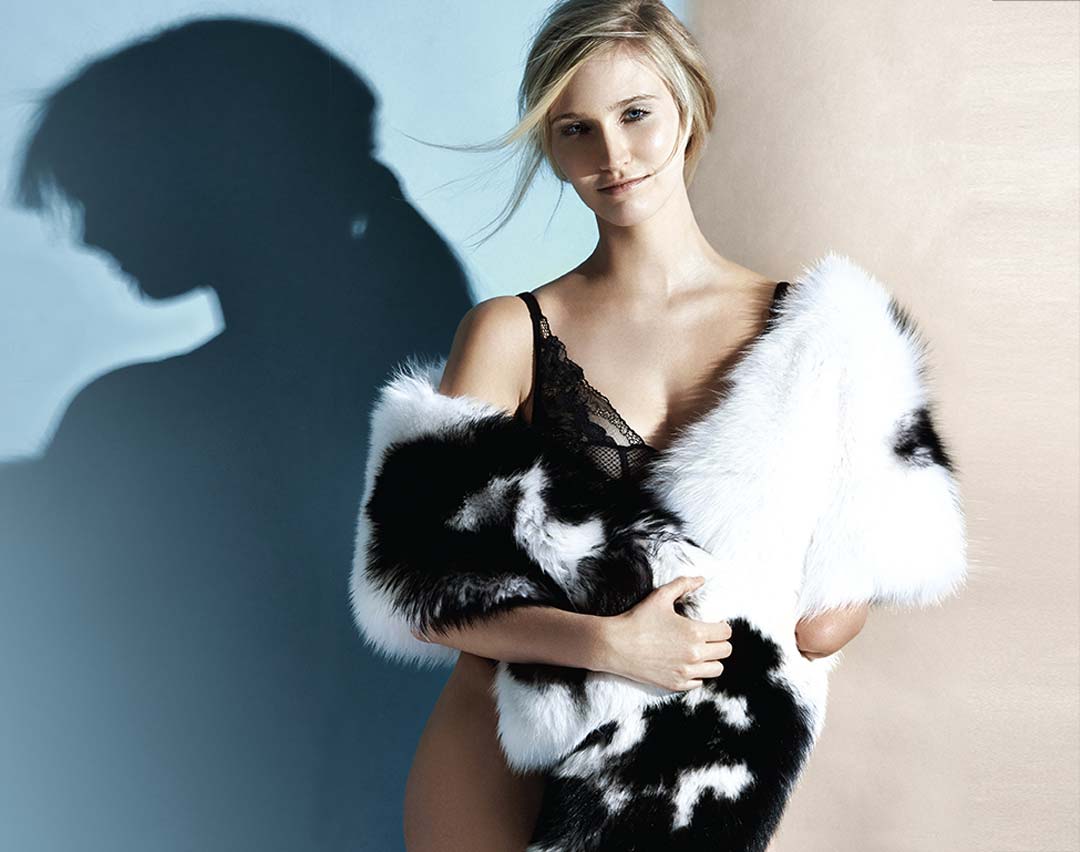 Kelly Knox was born without a portion of her left arm. Most people might’ve been discouraged from trying to break into the fashion industry, but not Knox. She went on to become a model and is helping to broaden the vision of beauty to include people of all colors, shapes, sizes and abilities. To broaden the impact, she’s teamed up with colleague Angel Sinclair, founder of United Kingdom-based (UK) Models of Diversity (MOD). Recently, our own Lia Limón Martirosyan spoke to Knox about the organization’s mission.

Lia Limón Martirosyan: What is your role at MOD?

Knox: Throughout the years I’ve helped Angel with loads of different tasks, such as going out on the street and speaking to the public, asking them whether they feel there should be more models with disabilities within the industry, or why they think there is a lack of representation of people like us. I’ve done fashion shoots with Angel, who is black. That’s not a disability, but models of color are also underrepresented in fashion.

Martirosyan: I’m curious about people’s ideas as to why there’s a lack of models with diverse abilities within the industry. 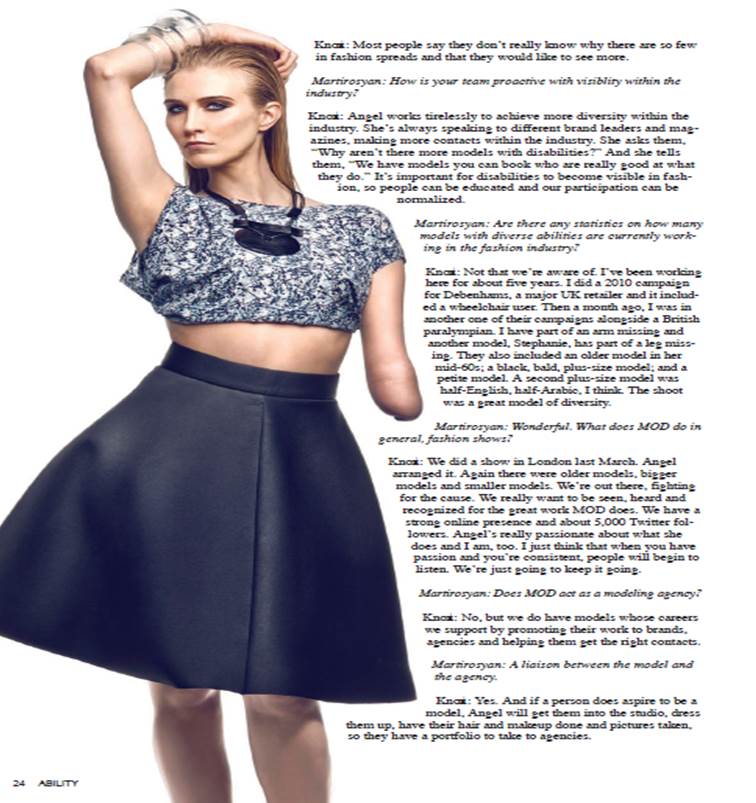 Knox: Most people say they don’t really know why there are so few in fashion spreads and that they would like to see more.

Martirosyan: How is your team proactive with visiblity within the industry?

Knox: Angel works tirelessly to achieve more diversity within the industry. She’s always speaking to different brand leaders and magazines, making more contacts within the industry. She asks them, “Why aren’t there more models with disabilities?” And she tells them, “We have models you can book who are really good at what they do.” It’s important for disabilities to become visible in fashion, so people can be educated and our participation can be normalized.

Martirosyan: Are there any statistics on how many models with diverse abilities are currently working in the fashion industry?

Knox: Not that we’re aware of. I’ve been working here for about five years. I did a 2010 campaign for Debenhams, a major UK retailer and it included a wheelchair user. Then a month ago, I was in another one of their campaigns alongside a British paralympian. I have part of an arm missing and another model, Stephanie, has part of a leg missing. They also included an older model in her mid-60s; a black, bald, plus-size model; and a petite model. A second plus-size model was half-English, half-Arabic, I think. The shoot was a great model of diversity.

Martirosyan: Wonderful. What does MOD do in general, fashion shows?

Knox: We did a show in London last March. Angel arranged it. Again there were older models, bigger models and smaller models. We’re out there, fighting for the cause. We really want to be seen, heard and recognized for the great work MOD does. We have a strong online presence and about 5,000 Twitter followers. Angel’s really passionate about what she does and I am, too. I just think that when you have passion and you’re consistent, people will begin to listen. We’re just going to keep it going.

Martirosyan: Does MOD act as a modeling agency?

Knox: No, but we do have models whose careers we support by promoting their work to brands, agencies and helping them get the right contacts.

Martirosyan: A liaison between the model and the agency.

Knox: Yes. And if a person does aspire to be a model, Angel will get them into the studio, dress them up, have their hair and makeup done and pictures taken, so they have a portfolio to take to agencies.

Martirosyan: How long has Angel been involved with this?

Knox: Since about 2008. She got her inspiration from being on a UK TV show for Channel 4. I think it was called Miss Naked Beauty. She was also motivated by her experience as a model of color who faced discrimination. It made her want to do the campaign and address diversity as a whole in order to get models of all different shapes, sizes, colors and abilities accepted and working. She and I connected through social media.

Martirosyan: Tell me what sparked the connection.

Knox: When Angel saw the work I’d been doing, it added fuel to her fire. She recognized that models with disabilities have even less representation than models of color within the industry.

Martirosyan: When you head out for a go-see—an appointment between a model and a potential client—what kind of reactions do you get from industry professionals?

Knox: Luckily for me, most of my work is through a brand or client who approaches my agent. Before I began modeling, I never realized how many barriers there were for people with disabilities within the industry. I didn’t realize how much prejudice and ignorance existed. That made me even more determined to break down the barriers and to wake up the industry to the fact that beauty shows up in all different shapes, sizes and abilities.

Martirosyan: Good for you. So it’s like belonging to a community.

Knox: It’s definitely a community. We’re all very passionate about the cause and about the changes we want to see take place.

Martirosyan: Are you branching out to the United States (US)?

Knox: Definitely. Angel is bringing on a couple of girls from the US; one is named Holly, and she’s from Hawaii. She has a part of her arm missing and she’ll be involved in the campaign.

Martirosyan: That’s great. Not that my research has been extensive, but diversely-abled models are rare in the US.

Knox: We’ll bring it to you! (laughs) I recently did a fashion show for the American company P&G Beauty & Grooming in Beijing, China. It was really amazing to get support from a massive company such as Proctor & Gamble and be recognized by them. For the record, though, I’ve never used the word “disabled.” I hate that word.

Martirosyan: If someone wants to start working with MOD, how would they go about it?

Knox: They would send an email and pictures to Angel, and tell her a little bit about themselves.

Martirosyan: Can you make a living doing what you’re doing?

Knox: I think there are so many young girls out there who may be discouraged by the images they see in magazines or on TV, because it’s such a media-driven culture. But people will be a lot more accepting of themselves when they feel included. Through my website, I’m in touch with a 13-year-old girl from Brazil; like me, she was born with a piece of her arm missing. She thanked me for the work I’m doing and said I give her strength, inspiration and confidence. She wants to be a model herself. Showing a young girl like that how you can be happy and have feelings of confidence and self-esteem is one of my biggest achievements to date.

Martirosyan: If you don’t mind my asking, were you born with a partial limb?