While splashing in a hotel pool in 2006, Gordon Hartman’s daughter, Morgan, approached some children. Unable to speak, she tapped a ball at them eager to play, but they backed away cautiously.

The moment both saddened Hartman and made him determined to find a place where people like Morgan, who have cognitive or physical disabilities, can revel to their heart’s content.

“Morgan’s smile, her hugs, her ability to give so much of herself was her way of inspiring her father to take a different approach to the second half of his life,” Hartman said, while speaking at a school graduation in 2011.

When he discovered that the play-land he imagined for his daughter didn’t exist, Hartman and his wife, Maggie, who had already formed the Gordon Hartman Family Foundation, became determined to create Morgan’s Wonderland. The San Antonio, Texas based family started the process in 2007.

“We didn’t go to experts, we went to the grassroots, the people who have special needs, the caregivers, the parents, the uncles, the grandparents,” Hartman recalls. “We asked them: If we were to build something like this, what would you want to see? What are your needs?”

“Hundreds of people came to these meetings and we listened to them hour after hour.” Then he worked more closely with about 10 stakeholders on different aspects of the project.

The project grew exponentially until Morgan’s Wonderland became a 25-acre accessible amusement park for children and adults with special cognitive and physical needs. The park, which is also in San Antonio, opened in 2010, has a carousel, a music garden, off-road vehicles, a miniature 1930s style train, a sand circle play area and traditional and adaptive swings with the capacity to twirl wheelchairs.

“What was going to be a small, maybe a $5 million to $10 million park,” Hartman says, “turned into a $36 million park.” The facility has received visitors from all 50 states and 35 countries.

Hartman, who made his fortune in real estate, knew that his daughter was luckier than many because the family could provide for her every need. Morgan never went without a doctor’s care, a therapist, or medication. In consideration of the economic challenges so many parents of children with disabilities face, one of Hartman’s missions for the park was that there be no financial barriers to entry.

“We let everyone who has special needs in for free,” he says. “It’s a policy of ours, a mission. I ran into someone who comes to the park every two to three weeks from Houston. It’s a three to four hour drive. They come, they have two children with special needs who get in free and they can spend a whole weekend here and pay 20 bucks. This place really meets their kids’ needs.”

The most visitors they’ve had in the park at one time was about 4,500. But 1,500 is a more comfortable number, Hartman finds, because people with disabilities may need longer to get on or off of a ride.

“Visitors are very, very accommodating; there is no, ‘Gosh, it’s taking too long.’ Everyone is patient, willing to wait and understands, because there’s a culture there. We have children who come to our park on ventilators, who have two nurses with them.” 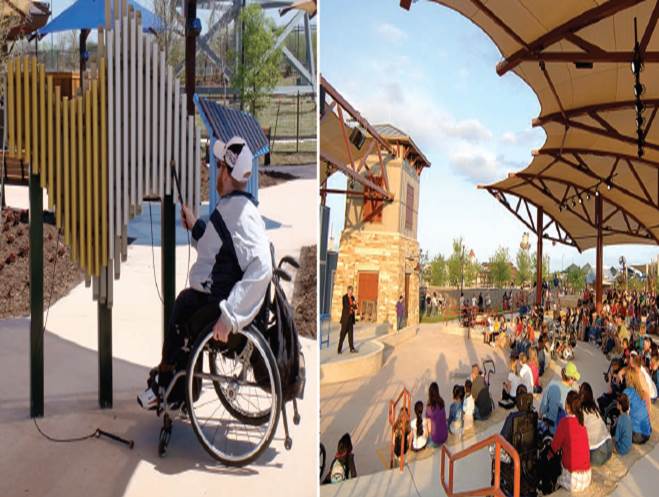 Before Hartman turned his focus to Morgan’s Wonderland and other philanthropic ventures, he had his hands full with career No.1.

At 19, he sold a landscape company he’d own since he was 12, bought a home and started a home construction business. Along with that, he owned a land development business, a mortgage title company and an insurance enterprise. After 22 years, however, he sold them all in 2006, about six months before the real estate crash.

Hartman says the financial weight of his projects hasn’t fallen squarely on his family or the foundation’s shoulders.

“Some of this money has been mine, but I’ve also gone to the community for a lot of this money, as well. This is about a community. You have to have a nucleus somewhere.” The park also keeps about 50 people working; roughly a third of them have disabilities.

Hartman also built a 75-acre soccer facility next door to Morgan’s Wonderland. He owns the pro soccer team the San Antonio Scorpions who play there and invests 100 percent of the soccer facility’s net profits from games, concerts and concessions into the amusement park.

“So instead of putting money away into an endowment, we’ve brought something else to San Antonio, in this case pro soccer, which was so much desired in this market,” he says.

“I’ve had people come and visit, owners of pro teams, other entities around the world who have come to look at Morgan’s Wonderland in an effort to replicate it. The family foundation is putting together a group called Wonderland Development Group to build Wonderlands in other places.” They also intend to coach others who want to build a similar park to serve their communities.

Hartman recently met with a wealthy businessman who was interested in the model. “He thinks it’s perfect.” The business man told Hartman: “‘I don’t need any money. This is about wanting to give back.’ He’s got his staff working on this already.”

Hartman built a school next door to Morgan’s Wonderland, called the Monarch Academy.