Mosquito-borne diseases in the US are West Nile Virus, St. Louis encephalitis (SLE), Western Equine encephalitis (WEE), and Eastern Equine encephalitis (EEE). Encephalitis is an inflammation of the brain that can cause symptoms ranging from headaches and a fever to paralysis, seizures, coma and even death. Reducing the number of mosquitoes, that are able to spread and amplify these diseases, is the focus of vector-borne communicable disease programs. While impossible to eliminate all mosquitoes, numerous methods are employed to keep their numbers as low as possible.

Vector control districts employ an integrated management program to reduce mosquito populations and keep the diseases they can transmit under control. Surveillance includes intensive field monitoring, laboratory testing, and research studies on the newly emerging and previously known mosquito-borne diseases. Control methods include a myriad of procedures. Among them are public education, the elimination of standing water, and the use of a variety of environmentally sensitive biological controls, including mosquitofish.

The mosquitofish, Gambusia affinis, is native to southern and eastern portions of the United States. They have been one of the most effective non-insecticidal and non-chemical methods of controlling mosquitoes for over eighty years. Mosquito fish are approximately 1/4 inch in length when born and grow to a maximum size of about three inches. They are ready to begin the work of destroying mosquito larvae at once. Mosquitofish can eat mosquito larvae as fast as the larvae hatch from eggs, as many as 100 per day. Mosquitofish live 2-3 years and can tolerate a wide range of temperatures.

Where to use (*and not to use) mosquito fish: Mosquitofish are intended to be used for stocking ornamental ponds, unused or “out-of-order” swimming pools, and animal water troughs. You may receive mosquitofish, free of charge, from many local vector control districts. Do not dispose of mosquitofish indiscriminately. Although a natural way of controlling mosquito larvae without the use of insecticides or chemicals, mosquitofish should never be placed in any natural habitat, such as lakes, streams, rivers, or creeks. Their introduction into certain natural habitats may disrupt the ecological balance that exists there. Recent studies suggest that mosquitofish may be reducing amphibians native to local streams including the California newt, the Pacific treefrog and the California treefrog, which is a candidate for protected status.

New Ponds: Copper pipe or fittings in contact with the water can kill the fish. The pipes can be coated with a special paint available at hardware stores. Plastic piping is preferable. New concrete ponds will leach lime into the water and make the water alkaline. A new pond should be appropriately seasoned (filled, allowed to stand several days, drained and refilled). The pH of the water is best in the range of 6.5 to 8.0. An inexpensive pH kit can be purchased at a pet or swimming pool supply store. Wine or whiskey barrels will leach harmful chemicals into the water at first. They should be soaked and flushed out several times or lined before adding fish or plants.

Predators: Provide large rocks and vegetation for shelter from predators such as raccoons, possums, cats, herons and egrets. There should be rocks on the bottom in the deepest part, where the fish will spend cold days in an inactive state. At other times, since the fish tend to spend the night at the edges, overhanging banks serve well to help protect them.

Duckweed: This is a tiny floating plant that spreads quickly, covering the entire surface of the pond, especially when the water is polluted with rotting leaves or other organic debris. Fish usually do not survive these conditions. If the pond has a heavy coverage of duckweed, it should be cleaned, and the recurring duckweed kept to a minimum.

Algae: The green plant that coats the rocks and pond bottom is beneficial, producing 60% of the oxygen, and is found in a well-balanced pond. Filamentous algae. This may indicate an excess of organic debris. If it gets too thick the fish may not be able to get to the mosquito larvae. Small amounts, however, are a good food source for the fish and shelter for the fry.

Unicellular algae: This turns the water green. It is not harmful to the fish but excessive amounts may indicate a high level of organic decomposition and a low level of oxygen. New ponds may turn green before becoming balanced, and an uncirculated pond will normally be somewhat green. Maintaining ornamental plants will help keep the water clear by competing for nutrients. Debris should be removed regularly. Use algaecides with caution, some are deadly to fish. Check at a garden nursery or tropical fish store for safe algaecides. Circulation and filtration are the best ways to keep a pond clear.

Leaves: Many leaves, like pine, oak, eucalyptus and pittsoporum, contain chemicals that are harmful to fish. Accumulations of these leaves make the fish too sick to eat the mosquito larvae.

*It is against California Department of Fish and Game regulations for private citizens to plant mosquitofish in waters of the State without a permit. 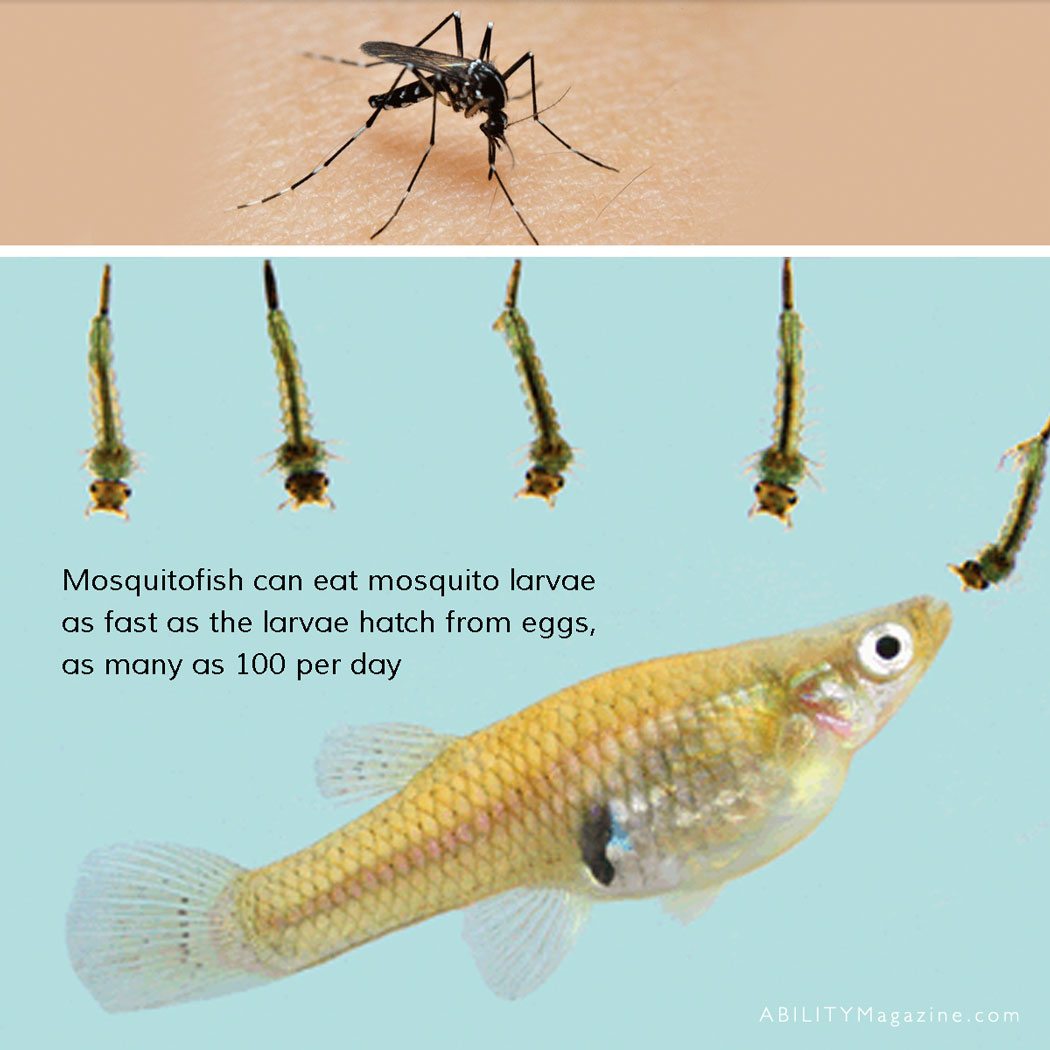