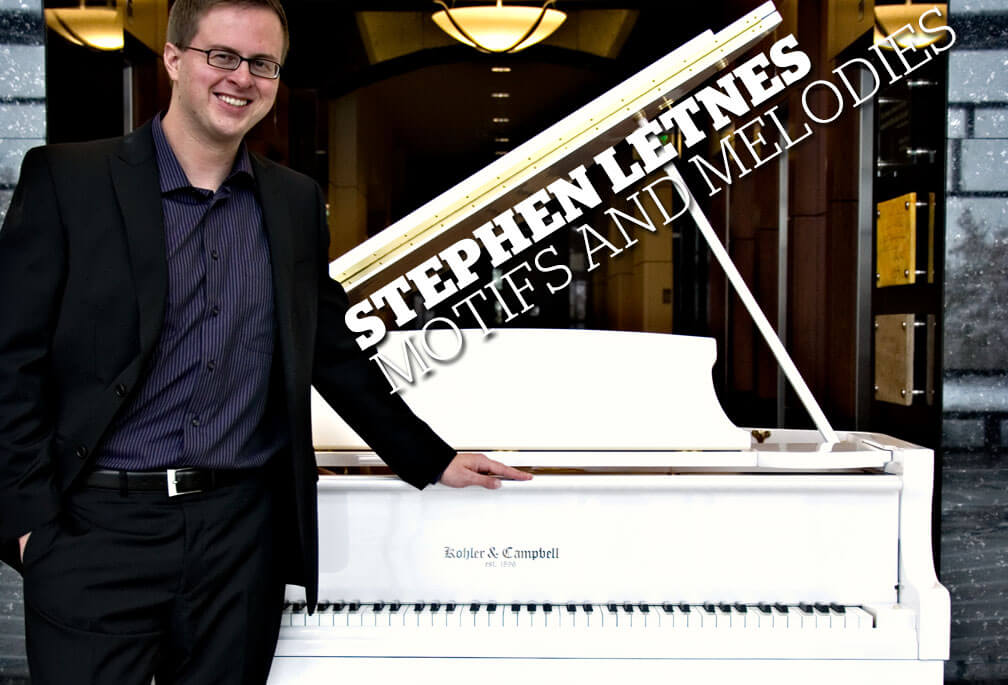 Stephen Letnes is a modern-day composer with a classical twist. Dig into his SoundCloud, and you will find a colorful bag of audible candy: instrumentals, orchestral pieces, film scores. At a young age Letnes began his musical journey with the violin, and as it kept getting stolen, his parents switched him over to the piano—a much heavier instrument. The piano is where his passion grew and evolved into composing.

A Russian Romance guy, he felt a deep connection with music by Rachmaninoff and Tchaikovsky. So he took them on, his way. Born legally blind, he felt at ease learning the language of music using the Suzuki method. Letnes is a hardworking, talented and determined musician with a mission: keep creating in this competitive industry he’s chosen to embark on, and show everyone it can be done.

The Taste of Musical Freedom

Letnes wants to pluck that one kid who’s great at beatboxing, living at home with his family in Bemidji, Minnesota. Get him into the studio, surround him with musicians, and make sure the kid is a part of the entire creative process. He wants to help people build confidence, provide ways to express and establish themselves and find purpose. And once they feel good about themselves, they can then try to help others.
Letnes recalls that exhilarating moment when the musical light switched on for him.

I was 15, going to play at my senior high school talent show a Rachmaninoff piece. Before that show, I had never played in public. I would always play for church or for recitals or competition, for medals—never in front of my peers, the people who were my friends or who hated me.

I got up and played this Rachmaninoff piece and barely remember myself playing. It was almost an out-of-body experience. I was playing in front of everybody, and the whole place went silent. At the end, I had a big rush of emotion and energy. I’m like, “This is what I want to do.” I was punching the air. I had played this nice, Romantic piece, and didn’t get up and bow. I started kicking stuff, punching in the air like a World Wrestling Entertainment wrestler. “Rrrrar!” I was yelling. I was just having a great time because I had finally let it out. I had it all on display for all 600 to 700 people to witness and yell and scream back at me. It was a fantastic experience.

From Piano to Film Scoring

A lot of parents put their children in music lessons and sports classes, but what sticks with a child depends on that individual spark of connection. Where it goes after that is the exciting part. When I was really young, I wanted to be a concert pianist. But I always loved film music. I saw Braveheart when I was real young, and it flipped my lid. I was blown away by the music. I’d always been blown away by film. Who doesn’t love John Wayne? Who can’t hum the theme to Indiana Jones and Raiders of the Lost Ark or Star Wars? John Williams is the top, but the one that really spoke to me was Braveheart, and that composer was James Horner. I remember going to see that movie three times that week at a theater two miles away from my house. I would find my way there, and I would watch it and listen to the score. It really turned me on to doing film scores. So yeah, I would dare say James Horner and some creative keyboardists from the band Dream Theater, a progressive metal band, got me interested in thinking, “Hey, I can do this. I don’t have to just do piano. How are these people making all these different sounds? How are they putting them together and making multiple sounds? I want to do that!”

That started me on my journey of figuring out, through ins and outs of music and school and life and relationships. I fell in and out of it, but it was only in the last few years I dove into it wholeheartedly and got to at least where I am today. Hopefully, it keeps going.

Some students aren’t aware or don’t have the confidence to voice their opinions on reasonable accommodations. And some educators have yet to experience how the slightest tweak to a learning technique can impact a student’s life. Letnes feels he had a wonderful college experience, but he does admit a moment could have steered him away from music, if he allowed it to.

I went to a private college, where I graduated with a degree in social studies education. I sang in choirs. I played a lot of piano for different events and stuff, but I didn’t get a degree in music. Actually, ironically, I got kicked out of music composition.

In music, they’re teaching literally music composition on the written page. Since I’m mostly blind, I learned all of my Russian Romantic stuff, and I composed stuff in my head. The professor took me aside and said, “Look, this is a class to teach you how to write a page, how to write music, but it’s on the page.” Pretty much they said, “Hey, you can audit the class if you want and sit in on it, but this doesn’t seem to be the right class for you.” And I was super young; it was my first year of college. I was very insecure, unsure of what to do about it. I was annoyed that something must be wrong with me, and I didn’t do anything about it. I just stayed away from the music program from there on.

But that was an anomaly. I got a great education, a great degree, and met a ton of great people. The professors on the whole were amazing. They cared so much. It was just this particular one where it didn’t work. But I am grateful I went there.

Creating music for yourself is one thing, but when you want to sell your product, other personalities and opinions come into play. Letnes has learned an important lesson that has helped build character as well as the character of the film he’s scoring.

Usually the way it works is, you meet or talk with the director, producer or editors and they send you the film, and you have what’s called a spotting session. “OK, in this scene, I want music here, I want music there, and I want it to start there, end there.” As you watch the film and learn the story arc of each character and the main arc of the film, you go back and forth and share notes about it. Then you discuss where music should go, and you debate a little bit and you figure out where music would best support telling the story within the film. Then I go to work after the spotting session, compose the music, and send it to the director and ask, “How is this? Here’s what I’m thinking.”

Either they love it or they say, “No, this is not what I’m looking for, please do it again.” You go back and forth a few times, and you find out what works. You have to take your ego out of it. It has nothing to do with ego. You can’t take it personally. This is the wrong business to have a huge ego, at least on the post-production side. So there’s a lot of back-and-forth, but it’s for the greater good. Write, rewrite and then rewrite again, but it’s all to serve the greater story of the film. As long as your ego stays out of it, everybody can come out ahead. But if the ego gets in your way, if you take things personally, you’ll get steamrolled, hurt and burned pretty quickly.

Personal Techniques and Technology of Creating Music, My Way

Human beings have an innate ability to adapt and develop learning techniques unique to evolving situations. We create artificial limbs where they’ve been amputated, devices to hear when losses of sound, a mono-ski when two skis are too many, strum the guitar with our toes when fingers aren’t an option. The dynamic examples go on. Letnes found his own way to create and communicate his music.

A benefit of growing up and being forced to learn things through the Suzuki method trained the brain to remember more. The techniques by which I was taught music helped me practice memory retention, practice music development and how I keep that in my brain. I am able to write and compose a lot of music in my head.

Technology assists us, but just like it says, we still have to find a way to make it work for us because it wasn’t designed specifically for us. This great technology called ZoomText by Ai Squared allows me to zoom way in so I can record what’s in my head on the keys and put it into the machine and write in layers, melodies, counter-melodies, different motifs, percussive patterns, and all that.

Nothing’s perfect, but for those of us who are blind or who have any kind of sight challenge or disability, we’re natural problem-solvers. No matter what is put in front of us, generally speaking, we will find a way to make it work if we want it bad enough. So even though I have this great assistive technology, ZoomText, which helps me record stuff, I still have to adapt how I use it to be able to write film scores in order to make it work for me. That’s what I like about persons with different challenges. We are forced to adapt and adjust and move so we can not only survive but also hopefully thrive in a world that can become hard on us. That’s kind of the fun, the hard fun, of making things work, the satisfaction of finding a way through to have that nice feeling afterward of, “Hey, this wasn’t meant to work exactly the way I hoped it would, but I found a way to make it work for me. This feels good. Now I can move on and be productive.” That’s what all technology does.

If you send Letnes a piece by Kabalevsky or Chopin and would like him to write just a portion of it for your wedding, he will, but make sure there’s no mistakes in the recording, his ear is that good! He can flawlessly create his own version of a song you like from scratch, but his original pieces have the flair of taking your imagination outside your four walls.

I would say more “traditional” film score music is my forte. I really like themes, and ...
Login to read the full article. SIGN UP HERE FOR YOUR FREE MEMBERSHIP
If you are already a member, welcome back! LOGIN HERE