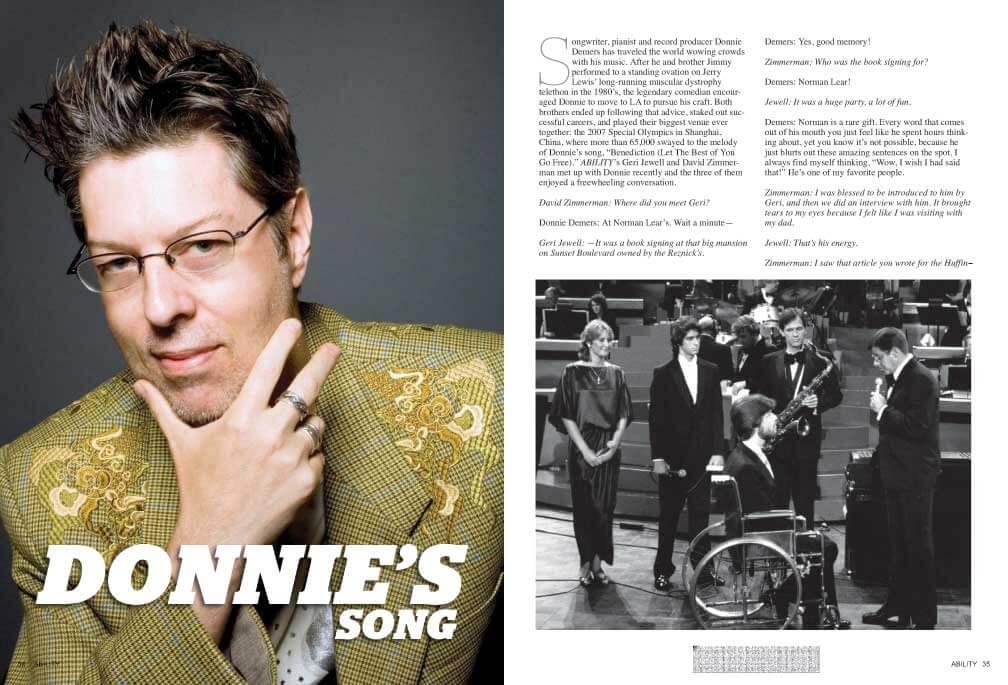 Songwriter, pianist and record producer Donnie Demers has traveled the world wowing crowds with his music. After he and brother Jimmy performed to a standing ovation on Jerry Lewis’ long-running muscular dystrophy telethon in the 1980’s, the legendary comedian encouraged Donnie to move to LA to pursue his craft. Both brothers ended up following that advice, staked out successful careers, and played their biggest venue ever together: the 2007 Special Olympics in Shanghai, China, where more than 65,000 swayed to the melody of Donnie’s song, “Benediction (Let The Best of You Go Free).” ABILITY’s Geri Jewell and David Zimmerman met up with Donnie recently and the three of them enjoyed a freewheeling conversation.

David Zimmerman: Where did you meet Geri?

Geri Jewell: —It was a book signing at that big mansion on Sunset Boulevard owned by the Reznick’s.

Zimmerman: Who was the book signing for?

Jewell: It was a huge party, a lot of fun.

Demers: Norman is a rare gift. Every word that comes out of his mouth you just feel like he spent hours thinking about, yet you know it’s not possible, because he just blurts out these amazing sentences on the spot. I always find myself thinking, “Wow, I wish I had said that!” He’s one of my favorite people.

Zimmerman: I was blessed to be introduced to him by Geri, and then we did an interview with him. It brought tears to my eyes because I felt like I was visiting with my dad.

Zimmerman: I saw that article you wrote for the Huffington Post where you said, “When you listen to Norman Lear speak, it’s like a master class in humanities.”

Jewell: He discovered me and launched my career on The Facts of Life; how did you and Norman meet?

Demers: In 2003, my brother Jimmy sang at the funeral of our friend Christopher Hemmeter, a real estate developer who designed the Jimmy Carter Library. Hal Gaba, who co-owned Concord Records with Norman Lear, was at the funeral and came up to Jimmy and me right afterwards. He asked if we were signed to a record label. When we told him we weren’t, he said, “You are now!”

I’d wanted to meet Norman ever since I found out that he co-owned Concord. Jimmy had already known him for some time, and then one night we were at a dinner party and Norman was there. I asked Jimmy to introduce me to him. But Norman must’ve already known about me because later that evening he came up to me and Jimmy and asked, “Would you two gentlemen come to my office tomorrow? I’d like to speak with you.” When we got there, Norman said, “What’s keeping you from moving forward?” I wondered if it was because our album was not doing as well as everyone had hoped.

Jewell: Is that what it was about?

Demers: No. He looked at me and said, “You’re both so talented, but I wonder if you are holding Jimmy back.” Norman thought that, because of my disability, perhaps Jimmy was spending too much time taking care of me, and not enough focused on his own career. At first I laughed because anyone who knew us knew that, if anything, the reverse was true. Jimmy is the youngest of four boys and a girl, and has always been coddled and pampered. I said, “Norman, I love you, but you’ve got it flip-flopped.”

Zimmerman: (laughs) You told him right away?

Demers: Right away. I said, “If anything, Jimmy has [indirectly] held me back because I’ve spent my entire life waiting for him to make it big, so that we could do our “brother act.” I always believed that we were born into the same family for a reason, and that the two of us would share our different, but complementary talents as a team, like the Carpenters. I mean, it was the perfect scenario: He was a great-looking singer with songs written by my, his brother, who just happened to play them on the piano while seated in his wheelchair. It was perfect. Our story was made for Oprah!

Zimmerman: How did Jimmy react to that?

Demers: Deep down, Jimmy knew it was true that I wasn’t holding him back. I think he was just as dumbfounded as I was by what Norman said.

Demers: So that was my first interaction with Norman Lear. I was struck by his candor and by his willingness to help us with a situation that he thought could have become a distraction. Since then, Norman has become one of my all time favorite mentors. And he has the most loving wife and children, all of them brilliant in their own right.

Demers: And then there are all the magical things that Norman has done for the world of television. I remember watching all of those great shows. I was a kid in the ‘70s, and that is when Norman Lear owned television! I loved Mary Hartman, Mary Hartman. That was probably my favorite. I couldn’t wait for the next episode.

Demers: Exactly, but not a lot of people know about that one today. It wasn’t as popular as All in the Family. ...
Login to read the full article. SIGN UP HERE FOR YOUR FREE MEMBERSHIP
If you are already a member, welcome back! LOGIN HERE