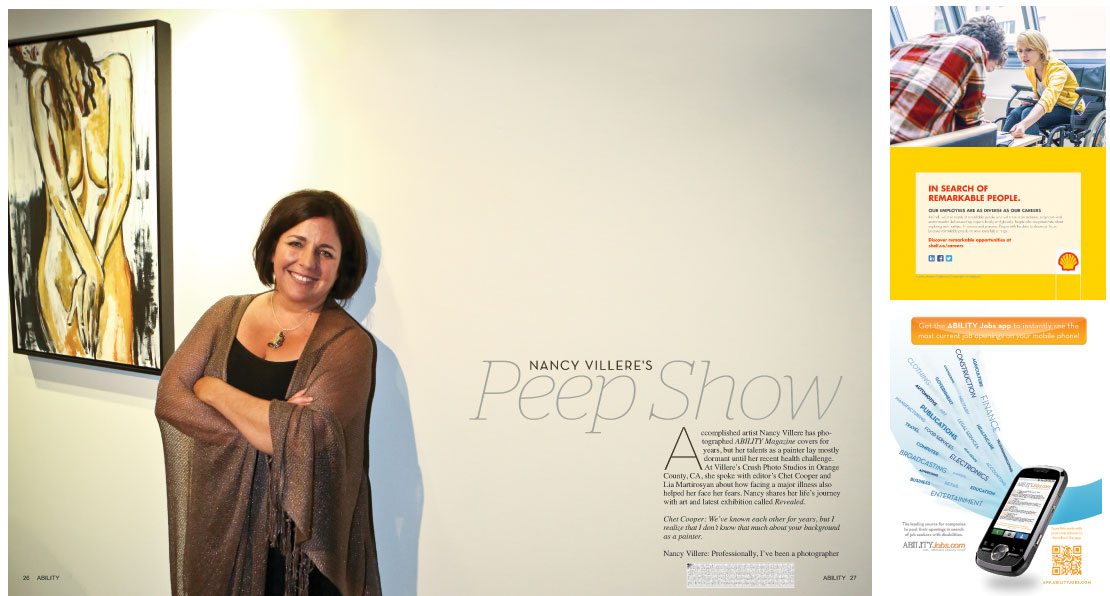 Accomplished artist Nancy Villere has photographed ABILITY Magazine covers for years, but her talents as a painter lay mostly dormant until her recent health challenge. At Villere’s Crush Photo Studios in Orange County, CA, she spoke with editor’s Chet Cooper and Lia Martirosyan about how facing a major illness also helped her face her fears. Nancy shares her life’s journey with art and latest exhibition called Revealed.

Chet Cooper: We’ve known each other for years, but I realize that I don’t know that much about your background as a painter.

Nancy Villere: Professionally, I’ve been a photographer since my early 20s. And then, in my 30s, I went to school for painting. I didn’t believe that I could render anything recognizable. I had a friend who was a painter, and I would watch her do her thing and just kind of pine about not being able to do that.

One day, she took me down to the art store, and we got supplies so I started playing with it, and then, all of a sudden, I had something that I could relate to and that I enjoyed. Shortly after that, I had an opportunity to go to the Laguna College of Art + Design.

Cooper: Tell us more about that.

Villere: My photo studio and the art college shared space in the canyon right by the Laguna Art Festivals, and one day the dean of fine arts came to tell me they were kicking us out of our parking places. I had never met the man before in my life, but I told him, “Here’s my first painting ever, and your school’s awesome. Wouldn’t it be—” I don’t even know what I said, just some compliment about the school, and he liked it. He goes, “Well, you’re a photographer and we always need photography, so why don’t we trade photography for tuition?” And I said yes immediately, and so I did all of the photography for this college, all the documenting of student art, all the art shows that came through their gallery. I did photography for their brochure, their booklet, their marketing material, and I got to go to school.

Villere: I started out as a freshman, and dropped out when I was a junior, because my photography business was too busy. But my time there was really good. I had fun. I was blown away by the other students. I felt like an imposter. (laughs) I was with 18-year-olds who had so much talent. They knew they were gifted, but I was gifted, too.

Cooper: He gifted you with the class, with tuition. 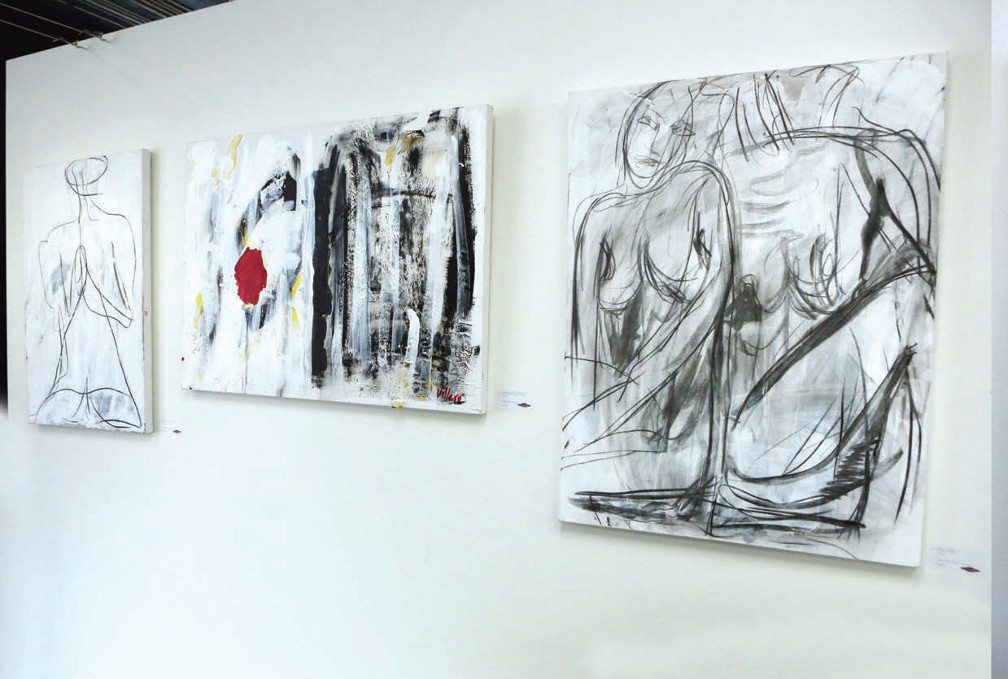 Villere: That’s right! I was gifted as well. I was glad I had the opportunity to go, because as an uneducated painter, I would have thought that I needed something to be better than what was coming out of me. Then I realized that what was coming out of me was fine. It flowed. It’s like channeling. I always feel like I’m channeling a painting. So having the school background gave me the reassurance that I had the technique and knowledge that I needed, but I don’t feel like I put it to full use because I just do what comes out.

Cooper: But you stopped painting for a long time?

Villere: I painted in and out of those years, but never with the idea to sell my work or have it be shown publically. It was very personal.

Lia Martirosyan: So this new thing that’s happened, where you’re painting prolifically, came about because of your breast cancer experience? Can you tell us more about the connection?

Villere: At the end of 2013, I got diagnosed with cancer in my right breast. They were unable to schedule the surgery until January 2014. When I had the cancer removed, I got reconstructive surgery, and had to take about four weeks off, because I couldn’t lift or carry the cameras. But I like to be busy, so I decided that I was gonna get my painting materials out, buy some new supplies, and paint while I recovered. I figured that would feel good, and I would have some concentrated time to paint. It felt like a new experience, and it was fun. I challenged myself to go beyond what I had ever experienced with painting. I felt like I wanted to get over old conversations and just see where I am now. (crying) I’m sorry, I don’t know—

Martirosyan: Don’t apologize, let it all out.

Villere: I was painting and communicating with my sisters a lot during that time, because I have another sister who likes to paint, too. So when I started doing it, I invited her over and we had a day of playing, and then she went home and got her supplies out and started painting at her house, too, so she and I would communicate, take pictures of our work as we did it, and send ‘em back and forth to each other. I was willing to paint only while it felt beautiful, not when I was feeling frustrated or pissed. I don’t know if you’ve ever experienced that, but sometimes every layer isn’t what you want it to be. It’s actually a foundation for something else, and so when you’re looking at it, you have to make judgments and evaluations. There was a freedom. I was willing to paint until it was complete. That gave me permission to play and play and play and play.

Martirosyan: You played until you completed some works. 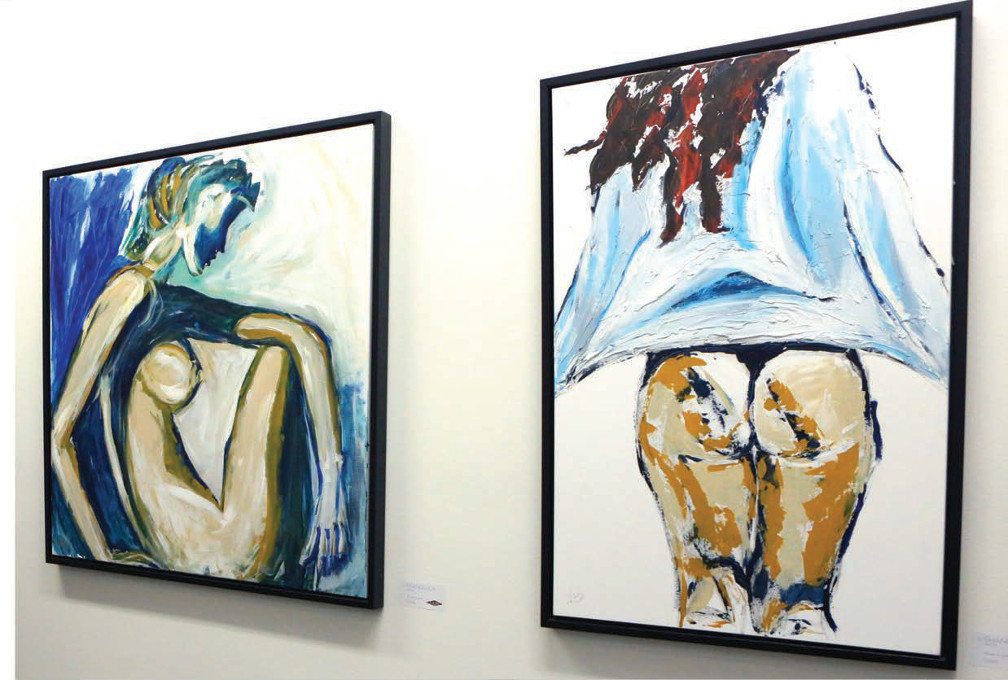 Villere: And then there was a moment where something shifted, and the layers started coming out beautiful more often. I was doing both abstract and figurative work simultaneously. The figures started to become bolder. Rendering the female figure has always challenged me. It’s fun to create dimension with light and shadow. In all my years of photographing women, I’ve been looking at light and shadow, and how it defines curves and all of that. So it was time for that to come out. I don’t know if this has anything to do with breast cancer, except for the fact that it got me painting again, and stopped me from being distracted.

Cooper: You started to get emotional there. What things were you holding onto that maybe you started to let go of?

Villere: Whether what I painted was good enough or interesting or valuable. It didn’t really matter. I got to the very peaceful place of having no agenda for the final product, and that always gives me room to go deeper into creating.

Cooper: Art for its own sake?

Cooper: So there weren’t any other issues you were holding onto, like your mortality? Even though breast cancer has come a long way, I would imagine that it still made you give some thought to your mortality.

Villere: Actually, it was more about should I put these paintings out for people to see or not. I think contemplating my mortality helped me move forward because if not now, then when? Who knows what’s just around the corner? That was part of the impetus to let the stuff go into a public forum, and see what I could do with it. Because we only have today (laughs) as you know. We have today to be the best we can be.

Cooper: I don’t think we have today. We have now.

Villere: Exactly. So not waiting till the right time felt like it was based on the cancer. I think what it also did was, as a woman—I don’t know—it’s like, our bodies are beautiful no matter what they’re doing. I don’t think anybody’s perfect, and so the concept of perfection really is overrated. Physical perfection may happen for a handful of people out there, and I do see them in my photography world. But if you asked those women, they wouldn’t think they’re perfect. Being at peace with the imperfection of our bodies, I think that I got pretty clear about that. It is whatever it is. I’m not my body. I’m my heart, my soul, my brain, too…

Villere: I’m nobody. I’m not my body. I’m a nobody. (laughter) I’m somebody, dammit! I don’t want to be all woo woo with this stuff, but—

Cooper: Do you think what moved for you was the freedom from fear?

Villere: Maybe conquering the fear. Creating for me sometimes is connected with fear, because it’s really like being my true self in that expression.

Martirosyan: Yes, there were so many times I was reminded of a peep show as you were talking! (laughter)

Villere: (laughs) No, I don’t think we have to explain “peep show.”

Martirosyan: We can’t just say “peep show,” and have people figure it out. We’ve got a picture of Nancy in the peep show, don’t we? 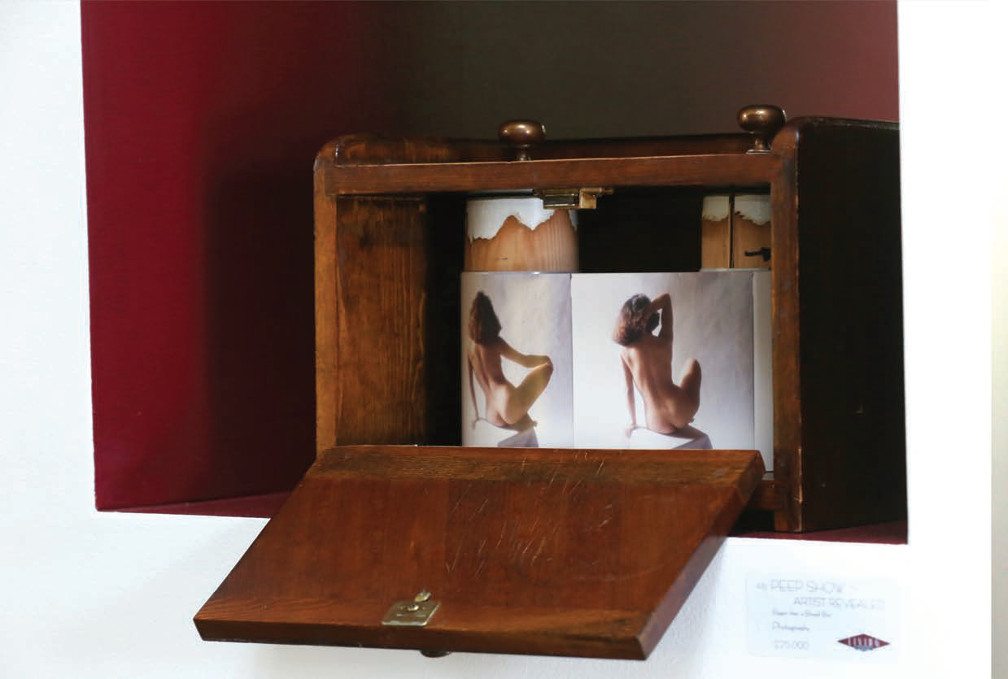 Villere: I’ve been, for the last year and a half prolifically, painting a number of pieces that are figurative and abstract, and I’ve been asked to participate in a SoHo show at The Living Room. The woman who put the show on has known me for about 10 years as a photographer, and when I introduced myself to her as a painter and showed her my work, she asked me to do the show, she said, “Nancy, nobody knows you’re a painter. This is like your secret life. We should do something with the name of the show where you’re uncovered or whatever.” And what came to me was “Revealed,” especially with the nude figures that I have in the show. So I decided it should be called “Revealed,” for me and for my pieces. (laughs) And it just so happens that right after that, we moved, and I had a lot of my old family photos of myself and my children in a couple of crates. I also found this roll of photos that I had done of myself naked for my husband, ‘cause I liked to do that in my cute early 30s (laughs) or late 20s. I decided that I was gonna paint from those photographs and did three self-portraits for the show, because how better to be revealed than to have my body exposed?

Martirosyan: There you go.

Villere: And while I was painting, it kept coming to me that I should have these photographs in the show. I liked them as they were: 5x5s on a roll, having come out of a printer and not yet cut apart. But then I thought of the idea of having a box that you look into, or something where it’s a private viewing, and you can attach the pictures to spindles and turn them from side to side to see… In my head I was remembering an old stop-motion thing that I had seen at some point, but it wasn’t gonna need to be stop-motion. It was just turning it from side to side as the way you view the pictures. I have a friend ...
Login to read the full article. SIGN UP HERE FOR YOUR FREE MEMBERSHIP
If you are already a member, welcome back! LOGIN HERE